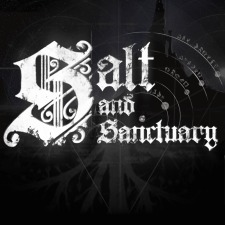 With Dark Souls being a hugely popular series, it's inevitable that elements of its game design would drift into other titles. You've got direct attempts at creating new games within the same genre, such as Lords of the Fallen and the long-delayed, often rebooted project Ni-Oh, games that attempt to mimic the challenge and loneliness such as Titan Souls, and you've got the 2D side-scrollers made in Souls' image, which includes the upcoming Death's Gambit. Ska Studios' Salt and Sanctuary falls into that final category.

Ska Studios first made a name for themselves in 2009 with The Dishwasher, a gory 2D brawler with dark, hand-drawn art. This title was made by a single person, James Silva, and is impressive in its ambition, even if it's a game I found completely off-putting. Seven years and several titles later, James would work with his wife Michelle to create Salt and Sanctuary, which is, in every way, a Dark Souls fan game.

From art style to controls to combat to user interface to writing, Salt and Sanctuary absolutely does feel like a 2D version of a Souls game. The XP recovery system when you die is the same, with an added cost in Gold. Health recovery is the same as Souls' Estus Flask system. This is the clear intent of the game, so it's hard to fault it for that; it succeeds at what it sets out to do quite well. At the same time, it feels cheap playing a game that feels THIS much like an off-brand Souls title. While Lords of the Fallen clones the series' game play, it still feels like its own beast, with its own style of narrative, writing, and art design, and game play focused on customizing elements of your magic spells. Salt, instead, feels like a Souls game in every way, until you get to later platforming areas, where it feels like a post-Symphony of the Night Castlevania title in every way.

It's hard for me to play this game and not say, "this feels way too familiar," but that's pretty much a mainstay element of the games industry. What really matters is not who did it first, but who did it well. Salt and Sanctuary is a well made game, much more impressive and approachable than The Dishwasher, but it's a game with a lot of little issues holding it back.

For combat, you've got your Souls basics: A light attack, heavy attack, rolling to dodge, stamina to monitor, and ranged spells/arrows, all wrapped around enemies who can kill you almost instantly if you're not slow and careful. The 2D side-scrolling perspective opens up a level of platforming not found in a Souls game, as players explore a large world in search of hulking boss monsters to slay. It's a fun game with a dire sense of balance. 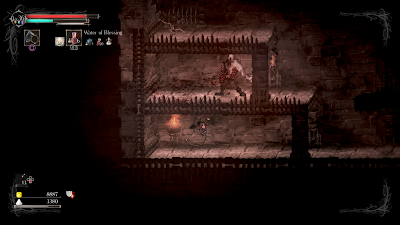 Like Dark Souls, you have to worry about equipment weight slowing you down. You can play with a shield and absorb enemy strikes or roll through everything, your choice. There are no strength/intelligence/etc requirements for using weapons; instead, you just need to unlock that class of item by leveling up in a Sphere Grid made famous by Final Fantasy X.

The balance of this game seems to largely favor heavy weapons and ranged spells. I found it incredibly difficult when I tried playing as a close-range dagger fighter, to the point that I wasn't enjoying the game; I switched to a huge broadsword (without needing to upgrade my strength at all) and suddenly I'm doing ten times the damage with each swing, with only slightly slower speeds. Trying to play without magic feels like a major handicap, and as soon as I started using ranged spells it became massively easier. In a Souls game, I feel like I am able to play well using any build I chose. Here, that really did not feel like the case.

Difficulty is all over the place. Salt starts out tough but fair, becomes incredibly difficult in the middle, with checkpoints and shortcuts much too far from bosses, and then becomes almost too easy shortly after. There are a ton of bosses, and some are merciless while others are easy to clear on your first encounter, regardless of your gear. You can level up to mitigate difficulty, but the effects of each level are rather pitiful; I shouldn't have to increase my strength twice to start doing 19 damage instead of 18.

You can level up/heal at sanctuaries which are tied to covenants, each with its own symbol and characters. Unlike the Souls games, I could never tell what the covenants here were supposed to do. There's no description of their effects and no significant difference between them, other than which items you can buy from them. It feels less like a game play system and more like a convoluted shop/quest system that doesn't have any real payoff. You can summon merchants of various sort to each sanctuary using limited items; that merchant remains at that sanctuary forever.

Salt's balance is bizarre, its subsystems poorly defined, and it could really use a map.  The interconnected zones feel more Castlevania than they do Souls, but without the visual punch that makes the different zones of a Castlevania title feel unique. Everything in Salt largely blends together, which is a major visual issue. There is so little contrast between background and foreground that I would sometimes die because I assumed a background platform or chain was a foreground element that I could interact with. It would be inappropriate for a game this grim to feature a colorful palette, but if you're going to use near-monochrome colors, you had better be an expert in contrast.


There's a story here involving travelers trapped in a strange land, a loss of memory, reincarnation, and discovery through reading items. In other words, it's a Souls game, but without the same quality of writing. The dialogue here is all vaguely ominous, but without any personality. No one NPC stands out as memorable  and everyone speaks in the same written voice. There are NPC quests to complete, but I didn't get very invested in them, since none of these people meant anything to me. There are a couple of endings and they're intentionally mysterious, not in service to the narrative, but because that's how it is in a Souls game.

Salt and Sanctuary is a long, often fun game that could use a heavy rebalance and rewrite. The scope of the project is amazing, but there were far too many moments where it just didn't click with me. This isn't a bad game, but it feels limited by its reverence for Dark Souls/Castlevania/Final Fantasy X, presenting systems that just don't fully work, but are in here to meet a fan game quota. I expected this to be a love it or hate it title, but personally, I'm stuck right in the middle.
Posted by surlaw at 11:11 PM