With elements of both classic 16-bit and modern action games, Heart Machine's Hyper Light Drifter is a mixture of harsh combat, mysterious exploration, and minimalist storytelling. Designer Alex Preston made a big splash on Kickstarter, with the game raising over $600,000 on an initial goal of only $27,000. A few months after its PC release in March, the PS4 version is finally here, and I've been excited to see what it has to offer.

Born with heart disease, Preston's game serves as a sort of narrative catharsis, featuring a hero who struggles with his own unnamed terminal illness. As the hero coughs and sputters after battle, the screen distorts and starts to fade out. This is effective as both a narrative within the game and as a metanarrative on Preston himself, showing anxiety over his story's fate in the face of his own medical situation. Would Preston/The Drifter be able to finish his quest? The world itself offers little concrete logic, choosing to express itself without words. We see brief pictures depicting past tragedies, but we don't dwell on any of them for long. 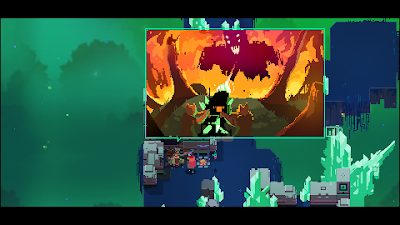 Preston's storytelling is personal and elegant, even if some of the scenes get a little repetitive. I tried my hand at wordless story telling in the "Truth" segments of Ghost's Towns and I know firsthand how difficult it can be. I also used both that game and the expanded content in the Steam version of C. Kane as personal catharsis, with Ghost's focusing on abandoning old ideas and Kane's side content focusing on dealing with loss, albeit in a jokey (but still painful) manner. On that level, I absolutely found something compelling in Hyper Light, and its lovely art and music certainly helped. 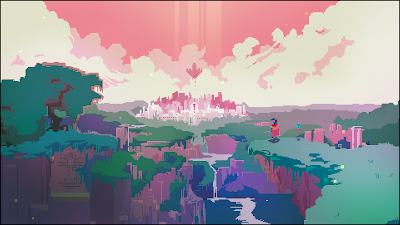 When it comes to game play, Hyper Light and I start to drift apart. The difficult, desperate, fast-paced combat suits the game's tone and its message of fighting for life against all odds, but I didn't find it satisfying. Upgrades, purchased using rare currency found in chests, are very few and far between and it's a safer idea to skip non-essential enemies than to fight and risk losing valuable health. Enemies don't drop anything and there's no character advancement outside of unlocking new guns from bosses/buying some of the few items, so I never felt a sense of progression as I fought. The boss fights themselves are generally solid (I especially liked the final boss, strongly disliked the first boss I fought in the northern region) but the enemies in between really feel like filler. 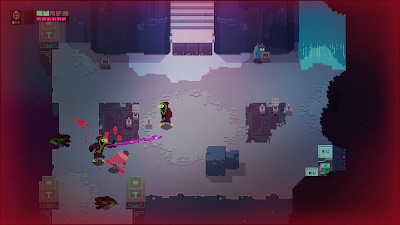 The game's top-down combat focuses on swords, guns, and dashes, quite similar to (but far better than) Furi, released earlier this year. Like Furi, Hyper Light is a game that punishes the slightest mistake, but failure isn't as big of a deal here. Part of my problems with Furi centered around the incredibly long, sometimes 10+ minute long fights, where Hyper Light keeps things short and deadly. The boss fights are over pretty quickly, win or lose, and if you do fail, you're right back at the boss's door. 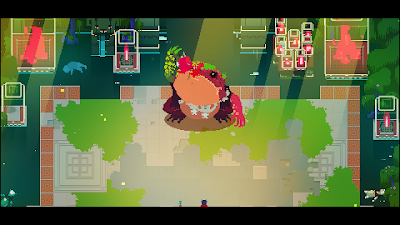 When not fighting, players explore the game world in search of eight collectable modules per area in each of its three regions. You only need to find four per area to progress, but finding all eight unlocks new gear. It's a nice system that rewards exploration without forcing you to find everything, but some of the pieces are hidden in obnoxious ways, often forcing you to rub up against walls to find secret passages. While the game's atmosphere is solid, I got tired of this around halfway through. 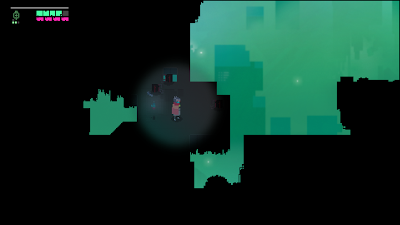 Not helping matters is a confusing map that gives you a general idea of where you and your objectives are. It's hard to tell what leads where or how anything connects, making it one of the least useful maps I've seen in a game. There are a lot of intentionally obtuse mechanics here that I enjoyed, but this wasn't one of them. 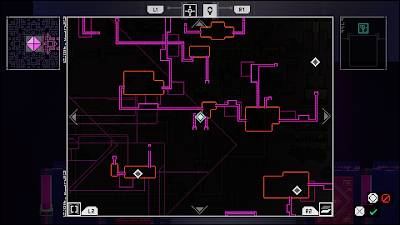 As a personal project, Hyper Light Drifter is great. There's a lot of passion here, but the game play isn't really for me. I wouldn't call it bad by any stretch, but I simply didn't connect to the combat, outside of boss fights, or the exploration as a whole. This is a game that features strong (but not ludicrous) stylistic connections to the Legend of Zelda games, and many of those titles often leave me cold in a very similar way. If this game's style of fighting and searching appeals to you, there's a lot to like here.
Posted by surlaw at 11:46 PM