To start with the obvious: Deck13 Interactive/CI Games' Lords of the Fallen is a Dark/Demon's Souls knockoff. From its controls to its tone to its combat that punishes greedy and impatient players, Lords of the Fallen is the closest anyone outside of From Software has come to faithfully creating their own version of a Souls game. And really, I don't think there's anything wrong with that.

At the height of their popularity, there were dozens of Space Invaders clones, the entire Japanese RPG industry in its early days consisted of clones of Final Fantasy and Dragon Quest, and the NES was filled with countless potential heirs to Super Mario Bros. Street Fighter 2 derivatives were in every arcade. Today, everyone wants to make their own Call of Duty, and games like Shadow of Mordor owe everything they are to the Assassin's Creed and Batman: Arkham series. Imitating a popular game of the moment is a tried and true part of the video game industry that goes back to the beginning, and while many of these games were bland and quickly forgotten, some truly great titles came out of this tradition. Lords of the Fallen isn't perfect, but it's one of the good ones.

Click here for a Lords of the Fallen screenshot gallery. 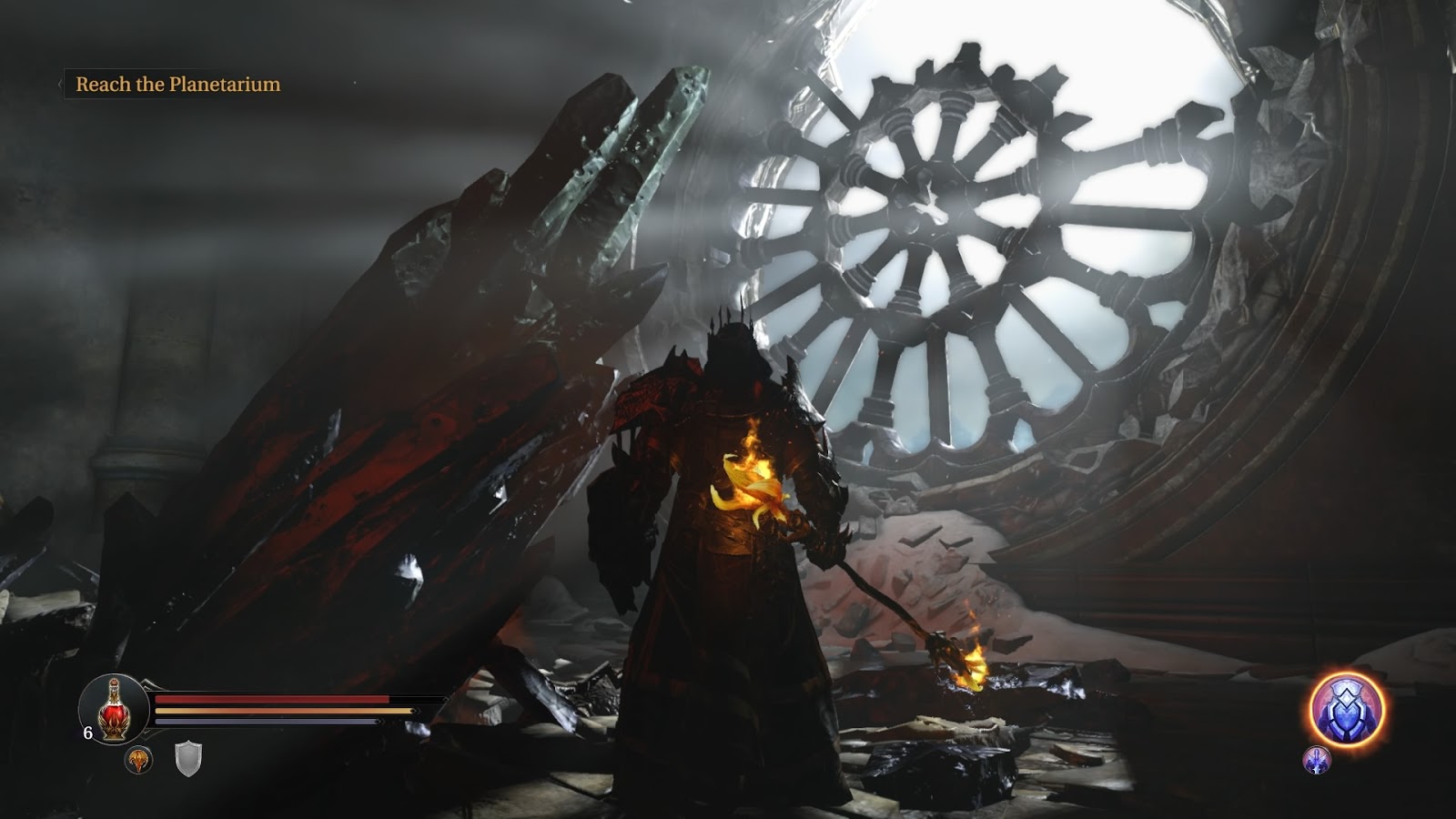 Lords of the Fallen follows the basic formula of the Souls games: Players are dumped into a hostile environment that requires slow, careful movement as they progress through a series of themed stages while confronting large, other-wordly bosses. Limited magic complements the player's melee weapons, and when you take a swing, you're committed to it. Survival relies on getting good at rolling to evade attacks (with roll speed dependent on the amount of junk you're wearing) or beefing up your shield and armor and learning when it's safe to be a turtle. Both games even have the same stat, named Poise in both instances, that determines how likely you are to be interrupted by enemy attacks in the middle of spells/attacks/item animations. 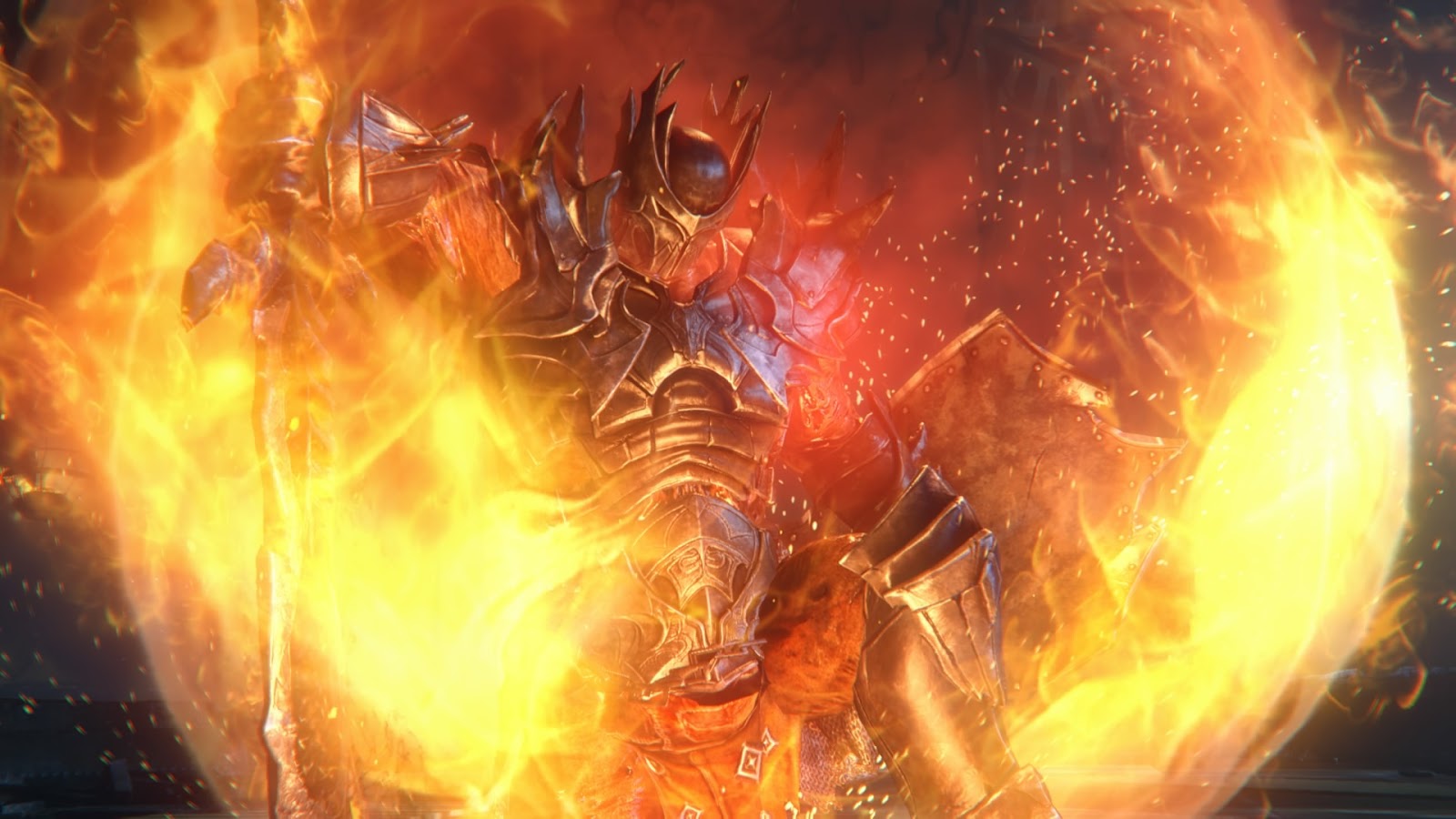 Lords breaks up the Souls formula in a few ways. While still very close in style, it's a decidedly faster game, and timing your attacks to chain them together and form combos does extra damage and uses less stamina. This encourages a faster, more aggressive play style, especially if you use the game's dagger and fist weapons (you should, they do ridiculous damage when you pull off a good combo.) There aren't any complicated moves to remember, combos are all executed simply by getting your timing right and it feels great when you pull off a complete set. 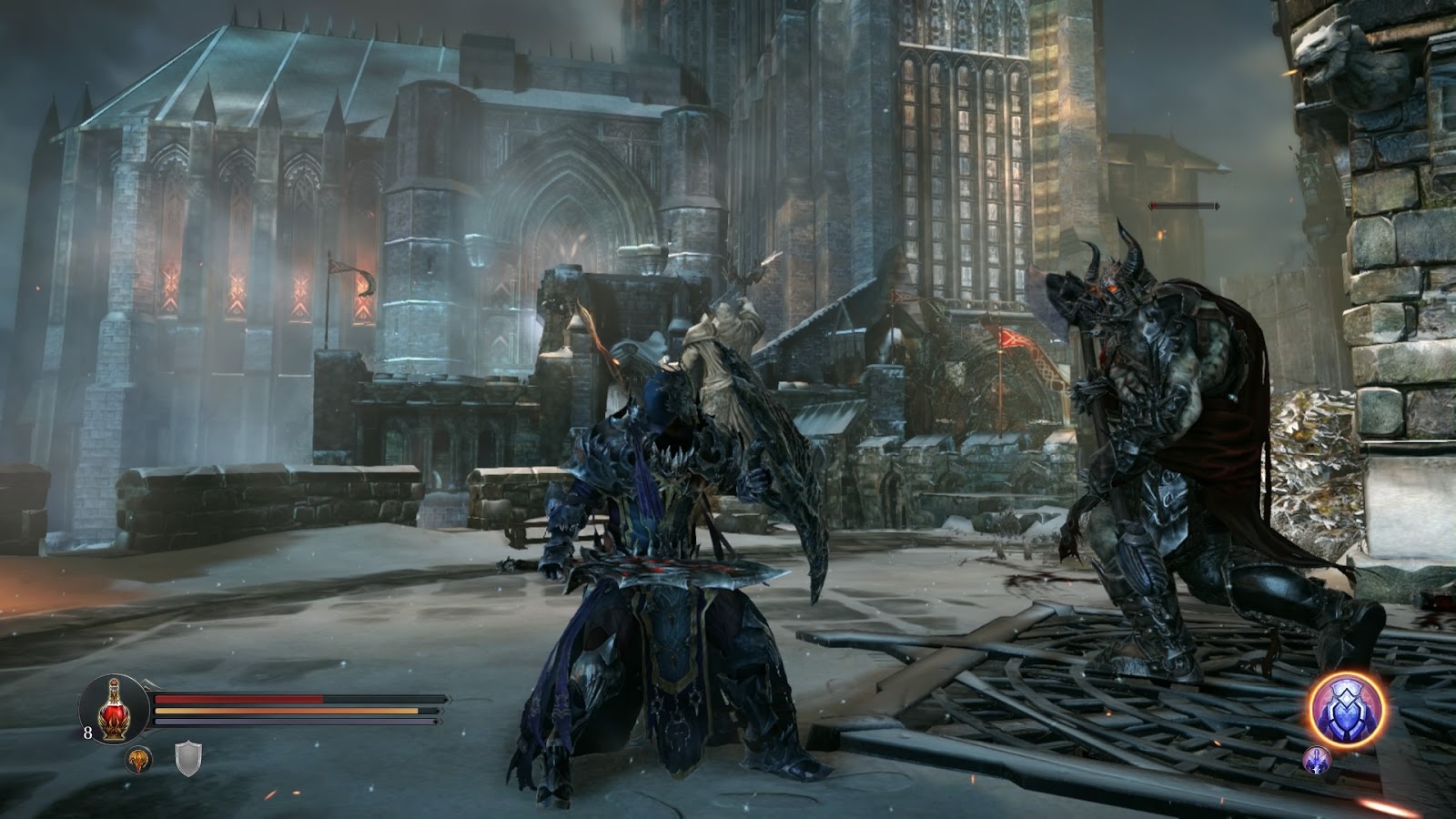 A higher degree of recklessness is also encouraged by the game's experience retrieval system. Like Souls, when you die, all of the souls/experience points you're carrying are dropped in that spot for you to recover if you can make it back there alive. You can safely take your time in Souls and plan ahead, but in Lords, the amount of points you can recover gradually shrinks, so you might have to make a run for it if you want a full recovery which, of course, puts you at greater risk of death. It's a good twist on the system, and while it's not one I'd like to see Souls adopt, it fits Lords well.

The magic system in Lords is greatly different from Souls. While Souls offers dozens of spells that any character can use with proper leveling, Lords forces you to pick one of three schools of magic when you start: Healing/defensive, attacking/strength buffing, and stealth. The healing spells are great and the stealth set actually contains the best offensive attack in the game, so there's not really much of a reason to go with the pure attack branch. Each school offers only four spells, which you can level up, and the other branches can only be accessed on New Game +. It's more limited, but it's interesting having to truly commit to your choice. I just wish there were more spells. 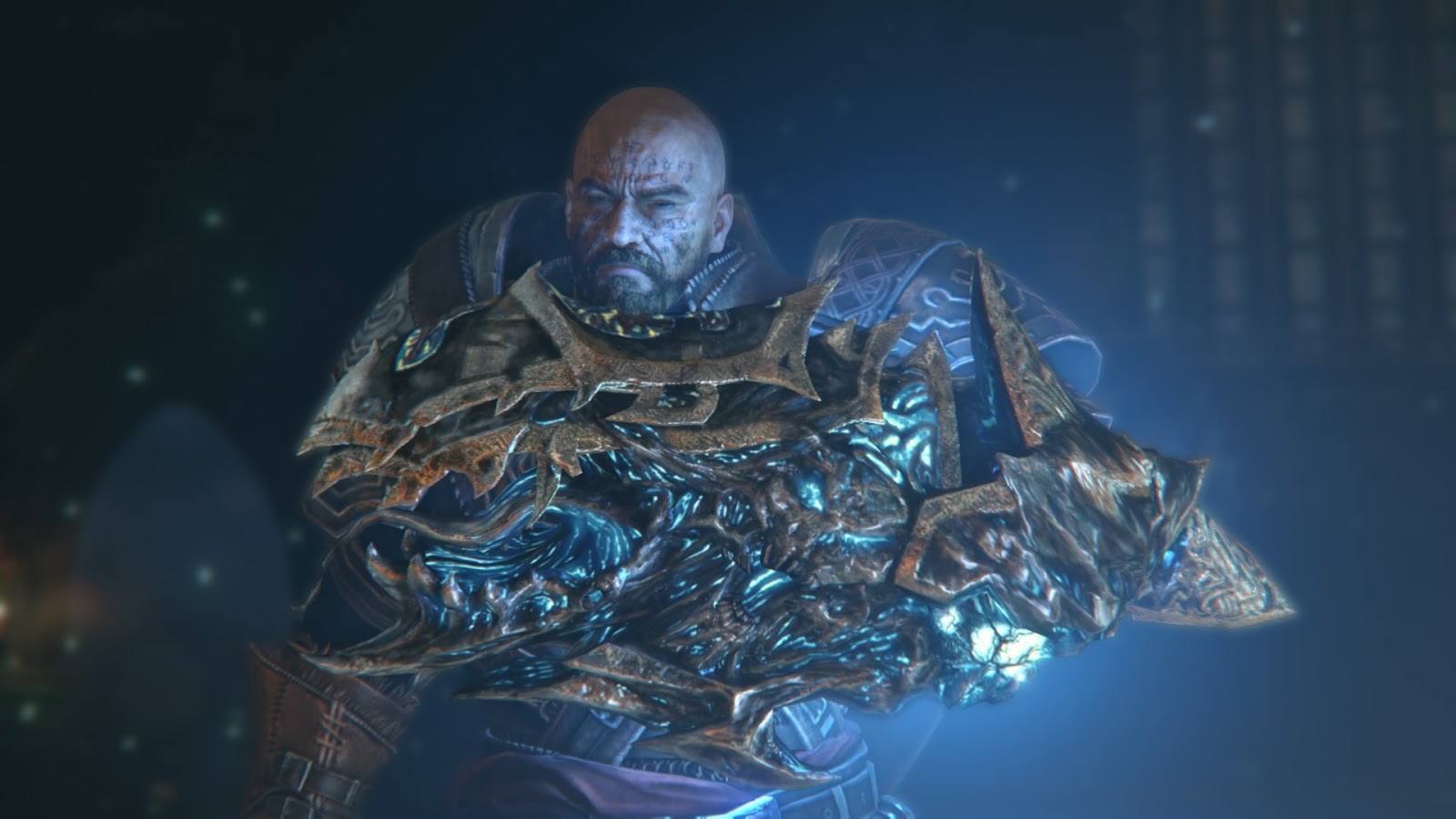 In addition to standard magic, you also find a gauntlet early on that serves as this game's ranged attack option. Unlike bows in the Souls games, it requires no aiming, and consumes your magic meter. There are three types of gauntlet blasts that can later be enhanced with different elemental runes, giving the fairly simple weapon some nice customization. I enjoyed using it to poison enemies from a safe range. Like the main magic system, it's simplistic, but it works. 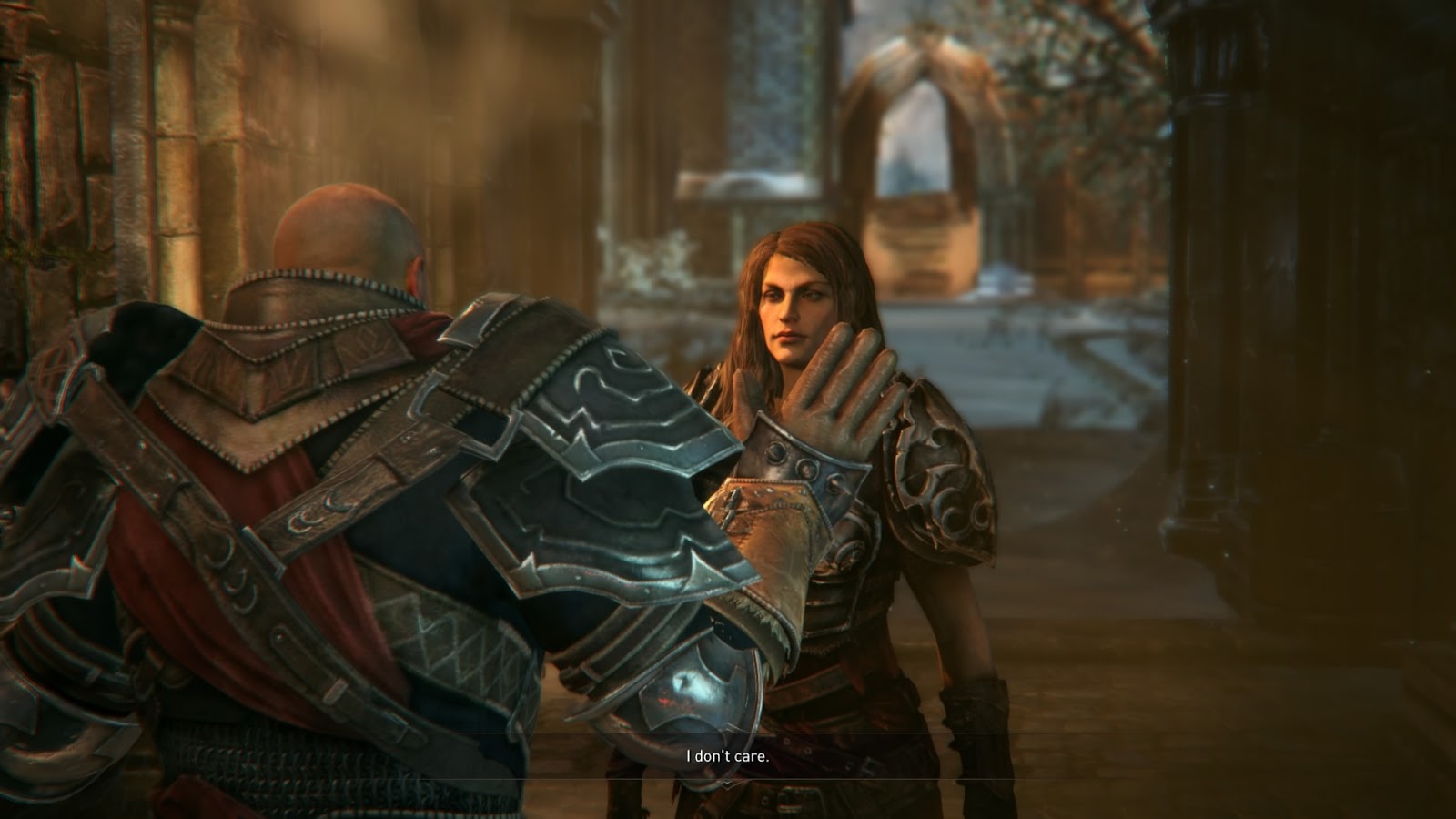 The biggest tonal departure from the Souls games is Lords' focus on story. All players control the same character, a convict named Harkyn who was released from prison to bust up some monsters, and he's got the same ugly mug for everyone. There are several supporting NPCs who stick around for most of the game, so you never feel alone in the game's dungeons the way you do in a Souls game. The plot isn't anything great; a king is trying to remove the evil from people's hearts and stuff goes wrong, an ancient god is angry, and skeleton monsters are busting through a portal to cause trouble. I did appreciate the amount of "I don't care" dialogue choices I was allowed to make, because while the plot isn't objectionable, it's not compelling at all. And for the most part, that's ok, because there aren't TOO many plot scenes, but the second to last area in the game contains an unbearably long plot dump that can't be skipped. It was bad the first time and worse on subsequent playthroughs. 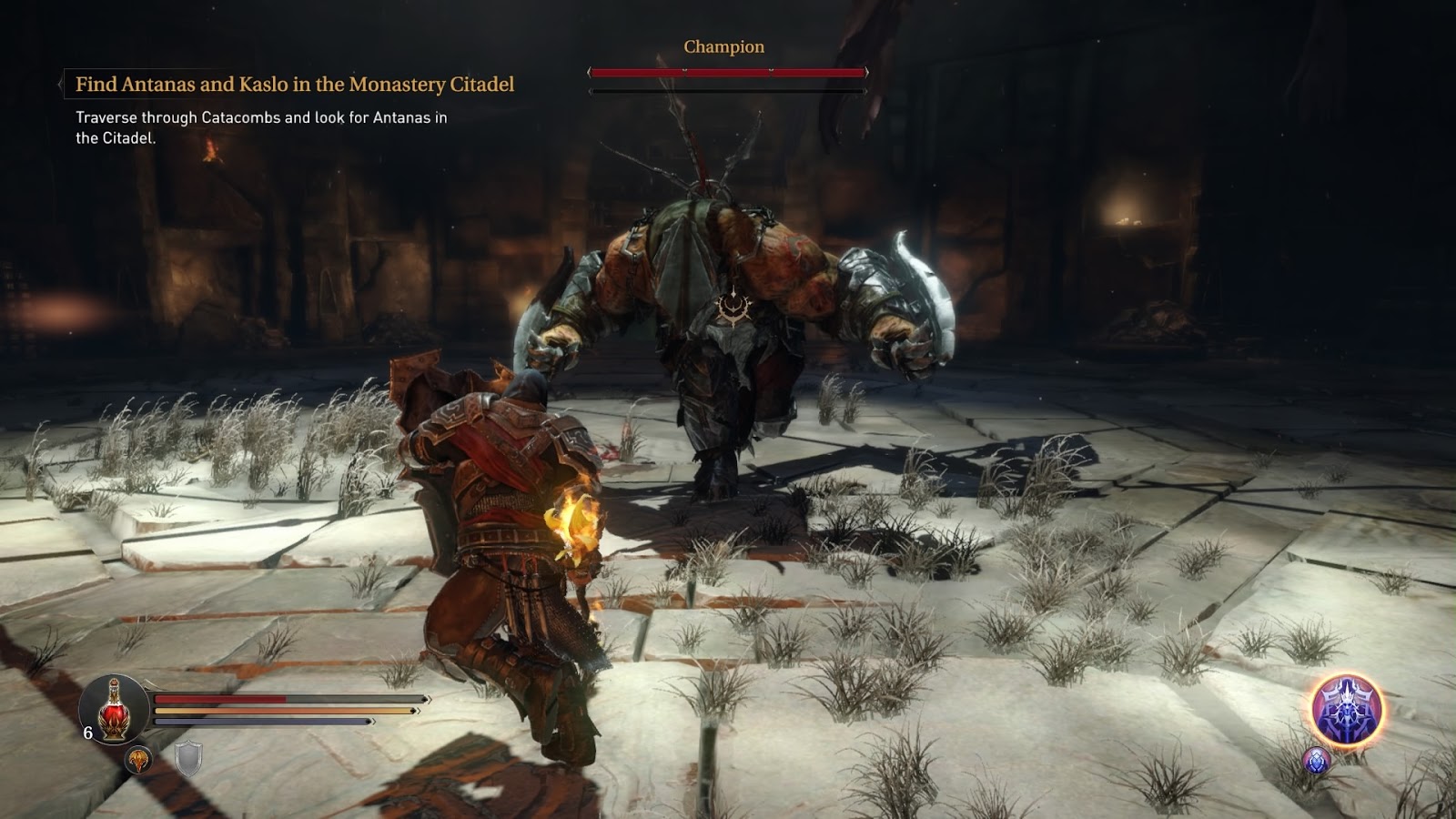 There's also no multiplayer here, so Lords doesn't have quite the same replay value as the Souls games. In spite of that, I still played through three times, one on each school of magic, using wildly different weapons. There's enough variety for it to still feel fresh. and the game's not so long that it overstays its welcome; my first play, where I explored everything I could find, was a little over 25 hours total. My second was 8, and my third was 5. You're not going to put hundreds of hours into this one, but that's fine with me.

While the game looks nice enough, there's not nearly the environmental variety of the Souls games, and every area ends up looking similar after a while. Nearly every zone uses the same color schemes, and they're all castle/ruin areas. It's cool to try doing a Souls style game in a more compact environment, but you still need more variety than this. It's easy to get lost not because of well designed mazes but because it all looks way too similar. There's also no fast travel system at all, which was a pain by the end of the game. I don't want to have one available immediately, but having the option at the end of the game is very nice for cleaning up areas I missed earlier. 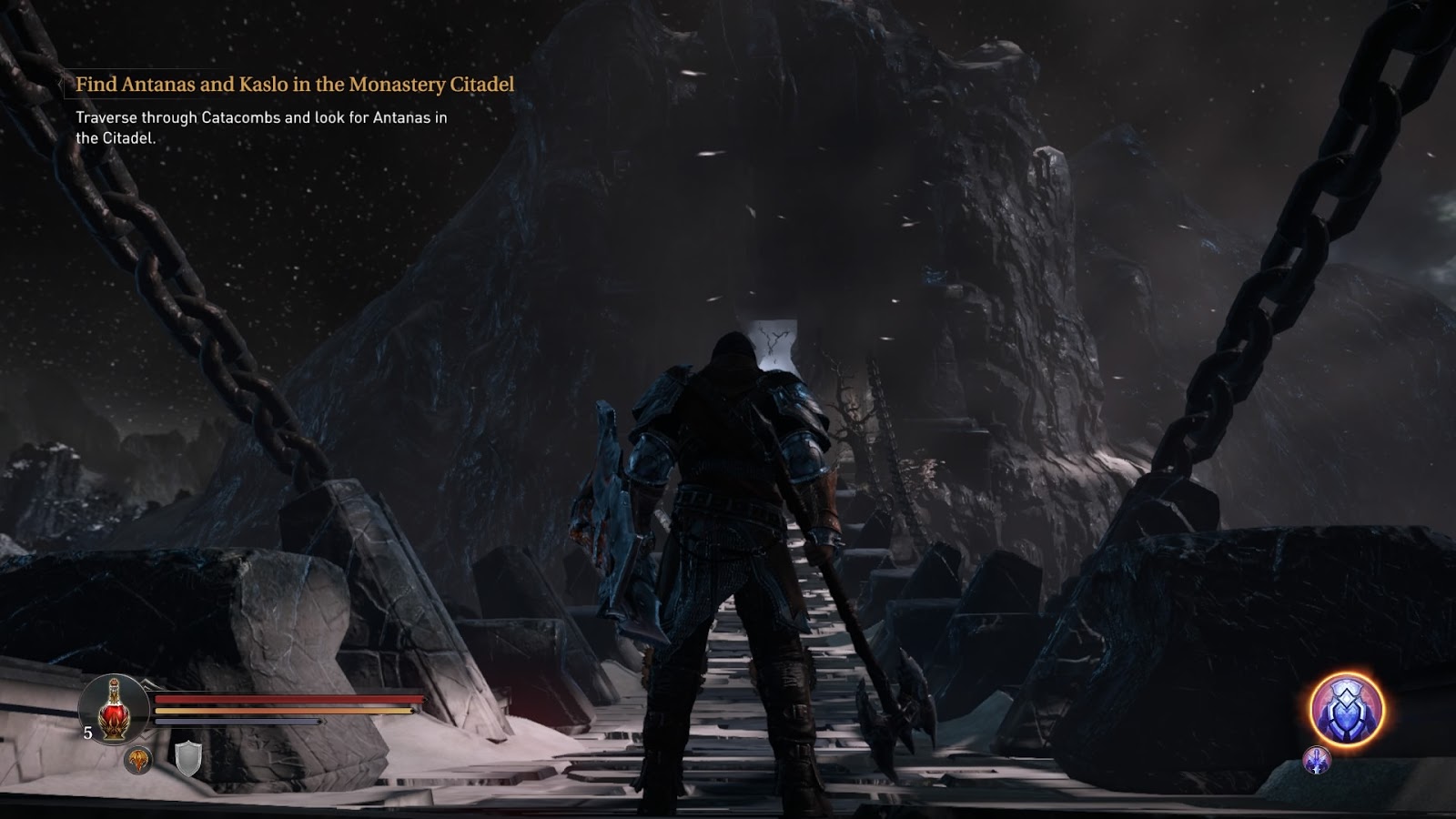 A cool addition to this game is an experience modifier; the longer you go without resting at a save point to recover your health and potion stock, the higher your multiplier gets each time you defeat enemies. It's a nice risk/reward system (though it's easy to exploit if you play as a healer) since you're going to want to push yourself just a little further, with just a little more danger, before going back to safety. And you're often going to get punished for that.

One last sour note is that this game is buggy, even after a couple of patches. More often than not, I couldn't play for more than an hour or so without experiencing a total crash. It got better after being patched, but it still happens. This is just completely ridiculous, and from what I've read, it's definitely not just the PS4 version. Just look at this patch notes list: This game needed a lot of help. It's a testament to the game's design quality that I still kept playing it (multiple times) in spite of this frustration, but its build quality is definitely shoddy. 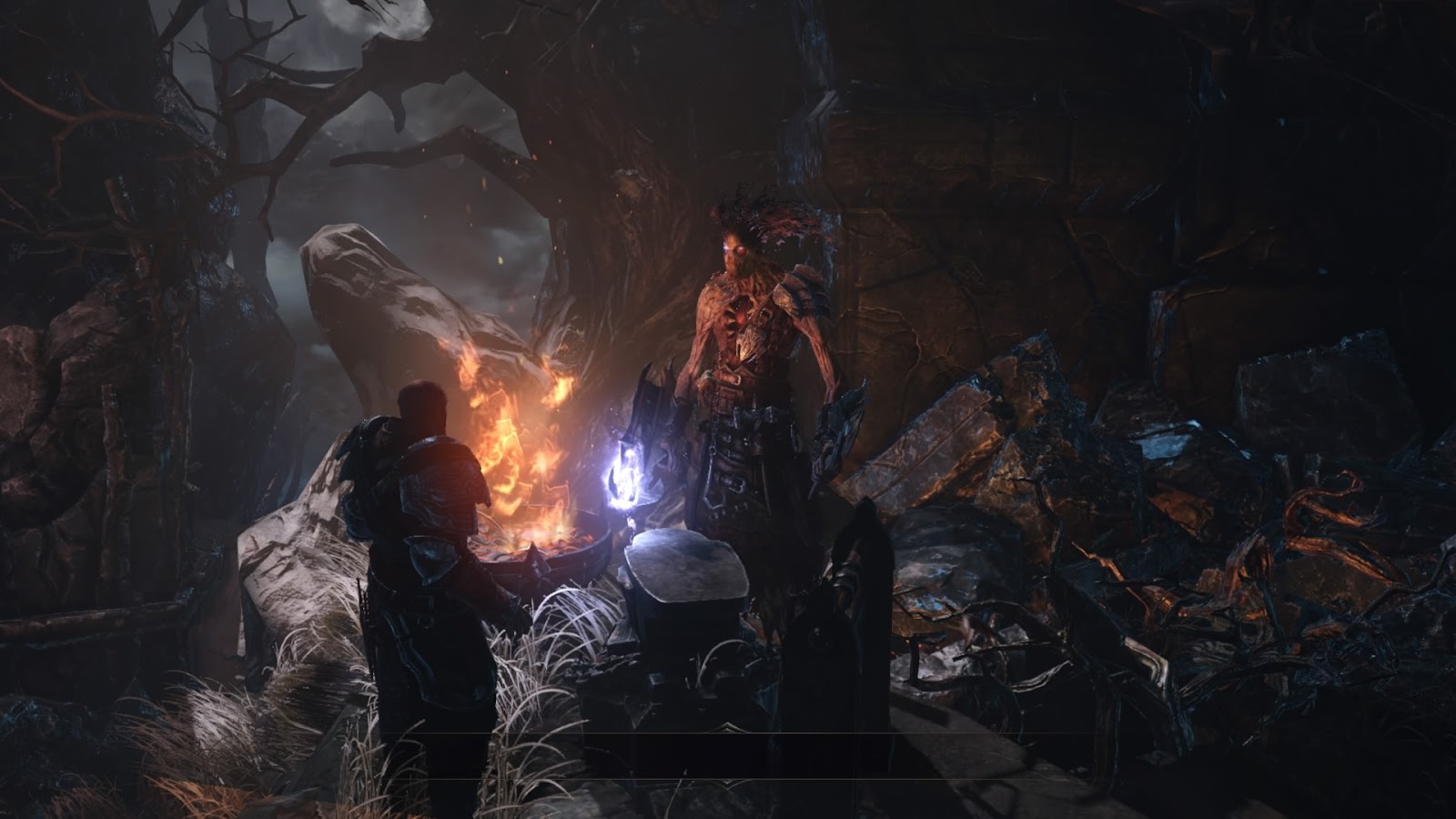 While I didn't enjoy it as much as the Souls games, I really had a great time with Lords of the Fallen and would be very happy to try out the eventual sequel. It's a strong title with some bad hiccups and some misleading information (the game never makes it clear just how much elemental type/weapon type matters from enemy to enemy) but its good parts easily outshine its weaker moments. As the first legitimate, close Souls clone, Lords of the Fallen is a fun, worthy title, and while it lacks in imagination, it's still a really good time. 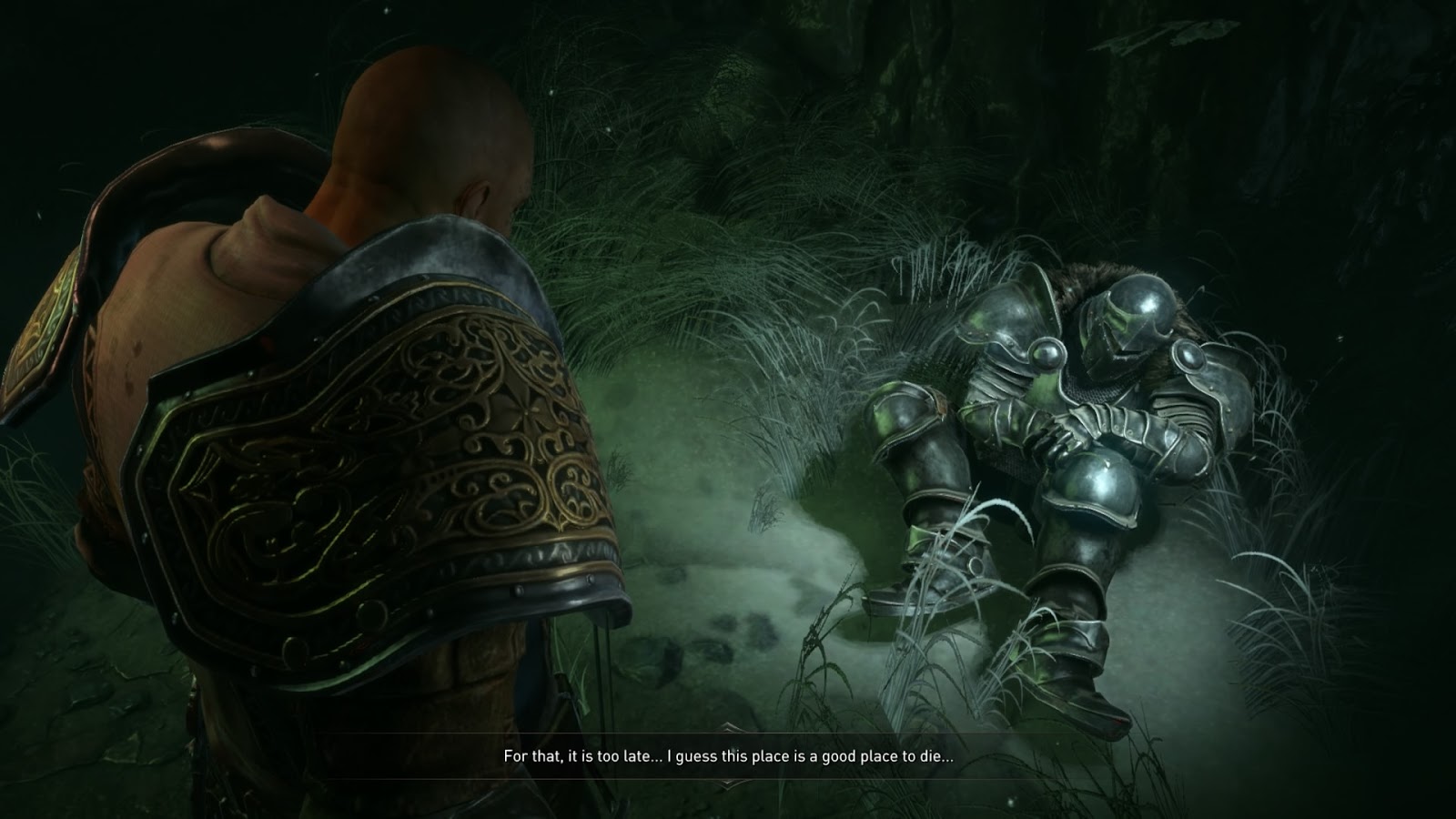 Email ThisBlogThis!Share to TwitterShare to FacebookShare to Pinterest
Labels: lords of the fallen, PS4, reviews