Journey is the latest release from Thatgamecompany, the team that brought us Flow and Flower. This is without a doubt the team's best game. Flow is a great game when played on a computer with a mouse, but the PS3 version is a mess, ruined by terrible, terrible motion controls. Flower continued the trend of using motion controls to manipulate the player "character," and it worked a lot better but still felt forced, control-wise. Finally, in 2012, motion controls are no longer the selling point they once were, and thankfully they don't play a large role in Journey.

The gameplay is simple: The player controls a character on a journey that begins in a desert with the goal being a distant mountaintop. The camera can be controlled by tilting your controller, but mercifully, you can ignore this and control it with the right analog stick instead. The only other controls in the game are jumping/flying using the X button and singing/whistling using the O button. Singing is used to activate switches, revive the strange cloth creatures you find along the way, and communicate with other players. 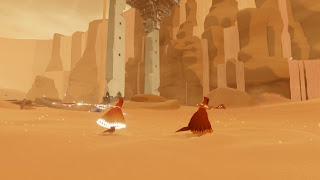 If you play the game while signed on to the Playstation Network, you'll randomly encounter other players. You can ignore them and go along your own way or travel together. There's no major gameplay benefit to keeping a buddy along with you, but it definitely enhances the game's atmosphere and the weird sense of silent companionship you can form with the other players works powerfully. You cannot chat in this game, either by voice or text, and you can't even see the other player's user name, even if you go into the PS3's Players Met menu, until you've completed the game. This is a very good thing, because if I knew the guy I was playing with was named PeelThePig, it probably would have compromised the game's tone.

Journey tells its story without a single word. All information is conveyed by the environment and by pictographs. It may be a tale of death and rebirth, it may be a creation myth, or it may be something else entirely. Maybe it's an adaptation of Stephen King's Dark Tower series. It avoids two major indie game pratfalls; it doesn't rely on gore to make the atmosphere, and it's not wordy and pretentious. The world begins bright, gorgeous, and alien. It ends dark, cold, and even more alien. 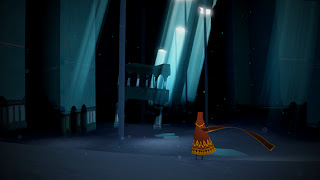 I don't think the story actually matters at all. As the title says, what really matters is the journey. The setpieces you explore, the lifeforms you encounter, and the companionship you form with other players create such a unique tone and environment that I can't think of any other games to compare it to. It's its own world, and in spite of sharing the same sort of sand and snow we have in our world, Journey's feels entirely alien. It's important that the player character is only humanoid, and not human. A human protagonist would turn it into a story about a stranger in a new world. The long, thin protagonists of Journey are as alien as the events that unfold, and that's exactly as it should be.

I'm not going to go into specifics about the setpieces you encounter, because it would be doing you a disservice if you haven't played the game. Journey couldn't work in any other medium. You could convey a similar atmosphere in a movie, but being a small part of this strange world really elevates it to another level. Lots of games get labeled Art Games, some rightfully, some only because they're slightly unconventional, but Journey actually deserves the label.

The whole experience only lasts around two hours, but it's well worth the price of admission. If you care about collectibles and Trophies, you can start a second play through using a Chapter Select feature to hunt down things you may have missed. It doesn't seem like the kind of game that should even have Trophies, but I give credit to Thatgamecompany for including one for returning to the game and playing it again after taking a week off. I think this is a clever way to extend the amount of time people will be online in this game, and you'll definitely want to play it with another player.

Journey is slowly-paced, fairly short, and easy to complete. All of these points might be unfortunate in some games, but they all enhance this one. There's really not a whole lot like this game anywhere, and I really give Sony a ton of credit for financing these kinds of projects.

One final note: You can press Start and then Select to change camera controls. If you're like me and non-inverted Y-axis controls drive you crazy, this will be helpful!
Posted by surlaw at 5:25 PM