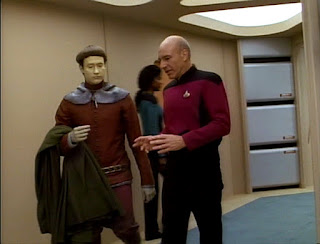 "The Enterprise grants asylum to a defector from the Romulan Empire, who claims to have vital information concerning a renewed Romulan offensive against the Federation."


A quality Romulan episode with a strong Cold War vibe. The Romulan defector is played well by James Sloyan, who pops up on DS9 later as Dr. Mora. This episode contains one of my favorite openings of the series, with Data performing in a scene from Henry V with a heavy made-up Patrick Stewart.

There's a lot of good tension, aided by the return of Commander Tomalak. This dude really should have become a bigger, more recurring character. I guess it's the nature of the show to not have season long plot arcs, but I'd have loved to see Tomalak be this series' Gul Dukat. If nothing else, he's a much better Romulan villain than Sela, Nero, and whatever the guy's name was in Nemesis. Those guys? Those are Bad Romulan Characters. 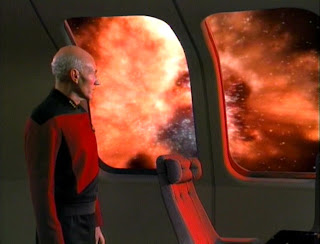 This is the second episode written by Ronald Moore, who joined the show five episodes back in The Bonding. That one's a bit uneven, while this episode really is pure Moore. You can tell from the episodes he wrote how DS9 would later come to be what it was.
Posted by surlaw at 1:10 AM