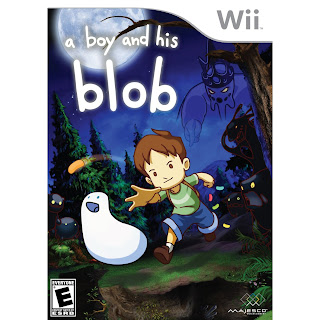 A Boy and His Blob was re-imagined in 2009 by Wayforward, the company behind the Mighty Switch series, Shantae, the absolutely perfect Contra 4, and a whole lot of licensed cartoon titles. Between this game and Contra 4, I wish these guys would be in charge of remaking more classic 2D games. Along with Silent Hill: Shattered Memories (also on the Wii!), A Boy and His Blob is among the best video game remakes I've played.

The basics gameplay is the same as the original. You play as a kid who finds a weird shapeshifting white blob from space with a hunger for jellybeans. By feeding him, you cause the blob to transform into various shapes and objects in order to solve puzzles. There are two major differences between this game and the NES original: It's no longer free-roaming, each stage is a linear series of puzzles, and it's no longer brutally unforgiving. 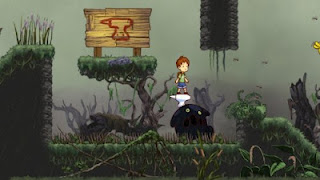 You'll still die a lot in this game, due to some tricky platforming and a few bad enemies, but it's not really a big deal. There are a ton of checkpoints and you don't have limited lives. You also no longer have a limited number of jellybeans, so you're much more free to just mess around. Unfortunately, each stage only gives you beans that will be useful in that stage, so you don't have total freedom to mess around. Also, way too many puzzles in the game are spoiled by having the solution printed on signs, as in the screenshot above. It's not a hard game, but it's extremely charming, relaxing, and well designed.

My one big complaint about the game is its boss fights. The game doesn't really feel suited for fighting bosses, and aside from the very first one, they feel tacked on. Your character's slow movement and the blob's chilled out AI are perfect for puzzle solving and getting around small, dumb enemies, but they don't work quite so well when you're battling huge smog monsters.

My only other complaint: There's only one save file. Want to start a new game and don't want to lose all of the unlocks you found? Live in a house with more than one person who plays games? Too bad. Stop doing this!

I absolutely love this game's art style. Wayforward are some of the best 2D artists in the industry today, and the hand drawn art they use in this game is perfect. Everything is expressive, the enemy designs are great, and it's a Wii game that actually doesn't look worse if played on an HD TV! The music is nice and atmospheric, but not as catchy as the original game's. 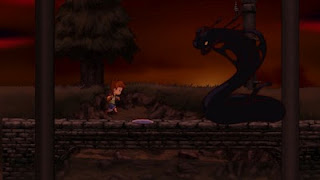 Wayforward is a small, independent studio, and I want to congratulate them for avoiding something that way too many indie groups fall victim to. Something that's a sore point to me in a lot of indie games is the whole whimsical and/or cartoonish graphics covered in gore thing. I didn't like it in Limbo, I didn't like it in Castle Crashers. It makes me not want to play Escape Plan on the Vita. It definitely ruined Binding of Isaac for me. I think it's a cheap way to try to add atmosphere and edginess to a game, and I think in almost every case it ends up hurting the product. I don't die in Limbo, see the dismemberment, and think "Boy that was gross! I'll make sure not to die again!" I look at it and feel kind of embarrassed.

There are a lot of games where violence and blood works; if the Silent Hill games were totally sanitary, they'd lose a lot of their impact. If you toned down some of the more painful scenes in the Metal Gear series, you wouldn't care so much about the characters in the end. There's a place for everything. I don't think the place for buckets of gore is video games which otherwise look like (and in most cases play like!) totally family friendly products. Would Mario be a better game if when you hopped on a Goomba its eyeball dripped out? So, why do so many indie games feel the need to basically have this kind of content?

Back to A Boy and His Blob: There's no gore, and your body parts don't go flying off when you fall on spikes. You fall over and sad music plays. It works, it's just sad enough, and no one is alienated. The game revels in its whimsy, to the point that there's a button dedicated entirely to hugging and reassuring your blob as you travel together. Without trying to sound too nuts, you grow fond of the blob by the end of the game in the same way you grow fond of your horse in Shadow of the Colossus. I really feel that would be lost if fountains of blood sprayed out of him if you made a mistake.

One last Blob related note: The first time publisher Majesco looked for a developer to remake A Boy and His Blob, they turned out this hideous trainwreck of art design, which was mercifully never released:

Let's take a moment to be especially thankful for what we got instead.
Posted by surlaw at 4:58 PM

Email ThisBlogThis!Share to TwitterShare to FacebookShare to Pinterest
Labels: a boy and his blob, reviews, wayforward