Pushmo is the first great original game released on the 3DS download shop. It's a first-party, Nintendo made title being sold for under $10 that could have very easily been sold as a full price retail title. It's a new IP from Nintendo, who in the last few years has been notoriously poor with bringing new IPs to North America, and they did this one right.

The game is a simple puzzle/platformer in which players pull and push blocks (The titular Pushmos) in order to climb to the top of a tower. You control Mallo, a chubby red monster in a thong with no relation to Nintendo's previous Mallow character from Super Mario RPG. They have similar roundness. If you've played Catherine on the PS3/Xbox 360, this game is essentially a less stressful, cutesier version of the tower puzzles from that game.

There are 250 Nintendo made puzzles, along with a stage maker and the ability to import stages made by other players by using the system's camera to take pictures of QR codes generated within the game. They become progressively more difficult, and introduce a few new elements as you go, such as manholes that allow you to teleport from place to place. Most stages are straight towers, but there are also a number of them that are designed to look like specific objects. These are the best ones. 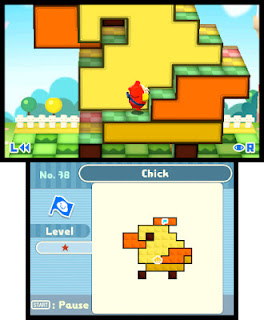 If you like the game's basics, you're going to get a lot of play out of it. Too many downloadable games are over before they feel like they've really begun, but Pushmo is absolutely packed with content. There's a ton to do, and creating your own stages is simple and fun. Unfortunately, the game takes a while to get going. The opening tutorial is horribly long and you have to play through too many dead simple stages before getting to the meat of the game. Many of them are unnecessary, such as back to back stages with identical layouts that are simply mirrored. It's a child-friendly game, but no child who can play this game would need this level of hand holding. Shades of modern day Zelda, right here. Once you're through that, you're in for a good time.

Here's hoping Nintendo looks at the critical and financial success of this game (It's one of the most downloaded on the system) and considers taking more risks on new IPs. Maybe give Chibi-Robo another shot in America via the download store? It couldn't possibly go worse than the way you bungled the last one you released over here. I know you jerks are listening.
Posted by surlaw at 5:23 PM