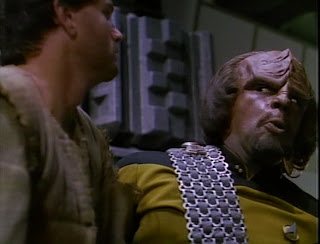 "While the Enterprise-D is reviewing a seemingly idyllic planet's application for Federation membership, an escaped prisoner leads its crew to discover an ugly secret: the government's shameful treatment of its war veterans."

This episode is pretty much First Blood in space. It's both a commentary on treatment of soldiers after war and a commentary on the risks of a horrible future full of genetic manipulation. There's also some "Democracy just doesn't work!" stuff at the end. The guy who plays the soldier Danar has a better chemistry with Data than with Troi in his prison scenes, their discussion on being programmed is one of the better conversations in the episode.

Like Space Seed/Wrath of Khan, genetic manipulation makes someone into a super strong, super smart juggernaut. Every one of Danar's plans is just misdirection, but it works pretty well. It's a lot better than Khan's creepy machismo. Yes, that's right, I think this episode is better than the Khan one. I don't think Space Seed's that great. The Hunted has a more interesting character to it and the Moral Dilemma feels more timely. 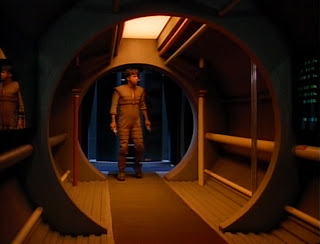 This episode features an absolutely enormous Jefferies Tube and a fight in a room full of the Star Trek Barrels that fall and bounce everywhere weightlessly. It also stuffs James Cromwell into a horribly misfitting bodysuit. All Star Trek bodysuits are unfortunate.
Posted by surlaw at 10:48 PM