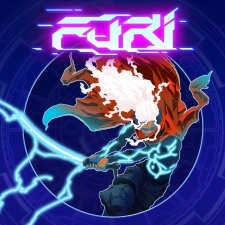 Team Ico's Shadow of the Colossus is a title which has remained popular with gamers and developers since its debut in 2005. A masterpiece of boss design, Colossus focuses entirely on large-scale, one on one fights with little filler in between. The bosses themselves are the puzzles, and the land between them is meant only for atmosphere and for optionally boosting your strength if you choose to.

The inspiration of Shadow of the Colossus can be felt in the climbing of giant enemies in Dragon's Dogma, the bosses only, 2D single-shot action title Titan Souls, and even the peaceful landscape exploration of games like Journey. It's also a title that's referenced a lot in independent development. Furi, by French developer The Game Bakers, is one such indie game, a sort of hybrid of the Boss Fights Only format of Colossus and the quick, reaction-based pattern recognition of a Punch-Out game, with some bullet hell-style shooting in between. 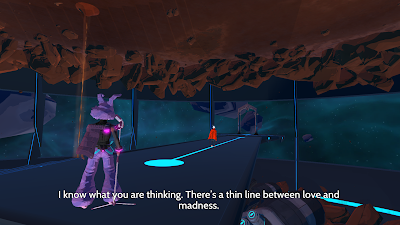 Players control a swordsman held captive in a surreal prison world made up of a dozen layers of reality. Each layer is guarded by a different boss, most of whom are sadistic or insane. Your only companion is a bipedal gray rabbit monster figure who imparts taunting wisdom as you climb each level of the game's spiritual tower. He functions as a more incoherent version of the animal masks that menace players between stages of Hotline Miami. Each boss fight consists of several progressively harder phases, alternating between dodging hundreds of glowing bullets and close-range combat focused on evading and parrying, making it a sort of ultra-twitchy, memorization-heavy Dark Souls. 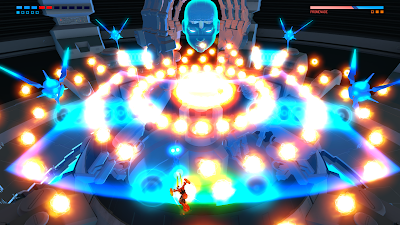 I like the concept of this game and dig its style, especially its wonderful music. I wanted to enjoy it, but it's just not for me, as I feel it commits the greatest offense a game can: It wastes my time. Boss fights can last 20 minutes, and the first 10 are generally easy, meaning you're going to die against harder phases of the fight several times to learn attack patterns and have to repeat all of the tedious, easy parts every single time. You get three lives, and restore one with each phase complete, but you'll run out quickly against some of these bosses before you learn how to take them out. Die once, repeat the phase; die three times, repeat the entire fight. Each time you lose a life, the boss gets to fully restore its current health bar. And on top of that, every boss is a damage sponge. 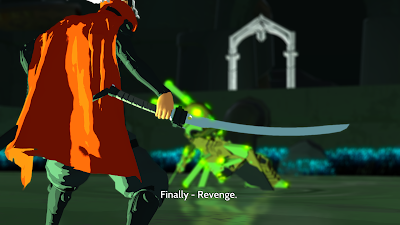 I like difficult games if they're rewarding, but the bosses here didn't feel that way to me. There's too much tedium, too much split-second perfection needed, and too much wasted time. Learning when to parry, when and where to dodge, and which attacks can be shot down is essential, but it just felt like rote memorization to me. Punch-Out has elements of this, but has more generous timing (even against Mike Tyson) and feels more fair. If this combat clicks with you, you may love Furi; for me, it left me feeling bored. 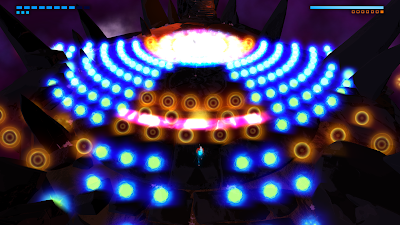 You can switch to an easier difficulty if you choose (I did about half way through so I could finish the story) but this is one of the worst difficulty scales I've ever seen. You have two options: Normal mode, which requires perfect timing, and Easy, which is brain-dead and cuts half of the boss forms. Nothing in between; no shorter, but still difficult, fights. No middle ground where enemies don't kill you in three hits and don't take a dozen solid hits per phase. It's a lazy approach to balance, utterly lacking the graceful difficulty curves of brawlers like Bayonetta and Metal Gear Rising. Even the notoriously challenging God Hand offers more fairness and reasonable balance. 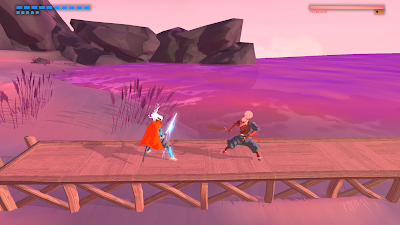 In between all of the fights you've got a lot of slow, slow walking. There's no exploration until the very end; each zone is a linear hall with no interactivity. Your guy trudges like he's waist-deep in water (in spite of being able to run and dash rapidly in battle) while the Rabbit Spirit drops vague monologues about the previous/next boss. None of it is very insightful or interesting, in spite of the sometimes pretty landscapes. While Rabbit Guy waxes philosophically, it has the emotional impact of a loading screen. The developers clearly realized how monotonous the walking is, since you can just press the X button and automate the entire march. 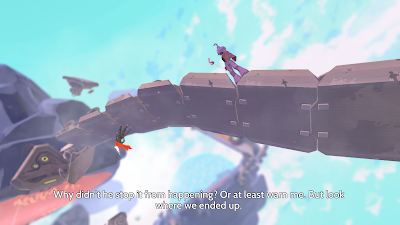 Furi will find an audience; it's not a terrible game, simply an ultra-niche one that's easy to find off putting. $25 is probably a bit steep for a game this light on content, but if extreme precision is your thing, you may find yourself charmed by it. At the very least, the soundtrack is an easy recommendation. 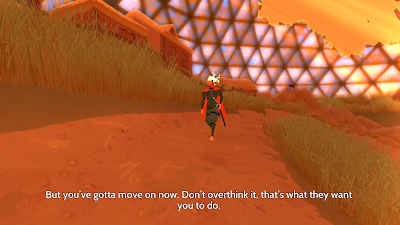