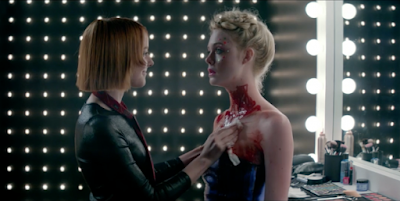 The Neon Demon: Or, what the hell did I just watch? Like Only God Forgives as a follow up to Drive, this movie is partially Nicholas Winding Refn saying, "that was too nice, how can I go darker?"

The first 2/3rd of the film are a hallucinatory show business/fashion world as Hell story, along the same lines as Black Swan. The final act is a disgusting series of events that keep getting more and more ludicrous until I went from feeling sick to just throwing my hands up and laughing. Every shot's perfectly composed, with incredible color, light, and framing, and Refn makes sure that we watch, in graphic detail, some absolutely horribly gross things. I really don't get grossed out by movies easily; I did here! This wouldn't be as effective at home on a TV, being there in a theater unable to turn away is truly something special and horrible.

Maybe there's some psychic future-sight at play here. Maybe the moon's a conscious, malevolent force. Maybe there's witches around. No one turns into a literal werewolf, though maybe they should. There are monsters, in the form of walking, talking metaphors. While picking out lipstick names, Jena Malone's character asks,"Are you food, or sex?" The best line in the film.

Keanu Reaves is really funny, until an awful turn of events. Jena Malone is the only real human in this world and has the only solid arc, until an awful turn of events. Elle Fanning and the other women playing models are all (intentionally) robotic. Alessandro Nivola is hilarious, and nothing bad happens to or with him! He says, "Beauty isn't everything, it's the only thing," which is maybe Refn lightly laughing about himself. The mix of the beautiful and the shockingly monstrous in this film's leads parallels the nature of Refn's films themselves.

Do not watch if you have a weak stomach. Even in the movie itself, some people just don't have the stomach for it.
Posted by surlaw at 7:51 PM