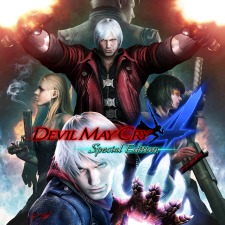 When it was first released in 2008, the fourth game in Capcom's Devil May Cry series was notable as both a fresh start for the franchise, with its focus on a new hero with simpler combos, and as a wonderful visual delight. With over three million copies moved between the PS3, Xbox 360, and PC, it was a sales success, and was well received by players and critics alike. As a response, Capcom unceremoniously abandoned the franchise, in the first of many perplexing moves the company would make over the next decade. The series was rebooted in 2013 with Ninja Theory's DmC, and now both DmC and Devil May Cry 4 have been remastered and re-released on PC, PS4, and Xbox One. So, how does DMC4 stand up today, and are its new Special Edition features worthwhile?

If you're just interested in what's new, skip down a few paragraphs to the Special Edition section.

For those new to the series, Devil May Cry is a fast-paced, stylish beat em up with heavy emphasis on complex combos, high scores, angst-riddled stories, and corny bad rock soundtracks. In the first three games, players control Dante, a white-haired demon hunter who's actual a demon himself. He's got a long lost brother, a famous demonic dad, and a sexy friend who looks like his dead mom. For the first two games, he's the star of a dopey video game soap opera. In the third game, he gets a sense of humor and a love of pizza, and the boring as dirt Dante of the first two games is permanently abandoned.

Unfortunately, Devil May Cry 4's new protagonist, Nero, takes after the Dante of the first two games. He has two emotions: Extreme anger, and doting love for his blank-slate girlfriend, Kyrie. He gets a few jokey lines, but for the most part he's an extremely boring hero, but at least he's fun to play as: While Dante's combat focused on close range melee and guns, Nero gets the addition of a magical extending arm that lets him pull enemies distant towards him, sail across pits, and quickly close the gap by flinging himself right into an enemy's face. It makes him a much more mobile character and I love his moves, even if his move set is significantly simpler than Dante's.

For about a third of the game, players return to Dante, who plays much like he did in Devil May Cry 3. That's not the only familiar thing: During the Dante section of the game, players fight through the exact same bosses and areas they already fought through as Nero, only in reverse order. After that, control switches back to Nero, who... fights all of the same bosses, once again. The combat's great, the bosses are well designed, and the environments are pretty, but Devil May Cry 4 honestly feels like a four hour game stretched to eight with all of its recycled content and lengthy but usually dull cutscenes. Boss rushes aren't a new thing in Capcom games, but having to fight the same small crew of bosses three times is really lame.

When the story's at its campiest, it's fun enough; Dante's a huge jerk and it's fun to watch him swagger around like an ass, and I like that the game's villains magically transform into ugly angel-bugs that feel like they stepped out of a Power Rangers episode. There's a magical Space Pope, and to no surprise, he ends up being evil. I guess that's a spoiler, but he's a Space Pope in a Japanese game, of course he's evil. Less interesting are Nero himself, Dante's sassy sidekicks Trish (the one that looks like his mom, but disguises herself as a proto-Lady Gaga to fool the Pope) and Lady, a demon hunter from Devil May Cry 3 who looks and acts nothing like she did in that game. There's actually nothing that distinguishes the two women, as they're both heavily sexualized figures that flirt, quip and pose in the exact same manner. There's really no reason to have both of them in the game.

Still, Trish and Lady both get more to do than Nero's girlfriend, Kyrie, who's even more bland than Nero is. She cries a lot, loves Nero, and has no plot or ambition of her own. She exists to get kidnapped, and does so with less charisma and personality than Princess Toadstool. Yes, I think Toadstool's one text box in Super Mario Bros 1 has more personality than anything Kyrie does. At least she presents Mario with a new quest and has cool mushroom dude underlings. Kyrie can sort of sing, I guess.

So About That Special Edition

The original DMC4 already looked nice, but the Special Edition bumps up texture quality, frame rate, lighting effects, and adds motion blurring that looks nice sometimes but makes taking screenshots of action a pain. It's a great looking game that looks even better now, but the music still stinks.

The PS4 and Xbox One versions get the new Legendary Dark Knight mode, which was present in the original PC release. It takes the base game and adds way, way more enemies everywhere, leading to complete chaos. It's crazy and exciting, but not recommended until you've played enough to be pretty decent at the game. Like the DmC remaster, there's also a new Turbo Speed setting that makes everything faster. I loved this in both games and kept it on the whole time. One change I hoped for, but didn't get, was having all of the game's difficulty modes unlocked right off the bat. I hate having to unlock difficulty settings.


The most hyped additions to the game are three new playable characters: Trish, Lady, and Dante's evil brother, Vergil. Each of them plays quite differently, especially with Lady's huge emphasis on guns over melee and Vergil's rapid teleport techniques, but if you're expecting some truly new content, you're going to be disappointed. There's a new intro and ending if you're playing the Lady/Trish campaign or the Vergil campaign, but otherwise, you're playing the exact same game. You'll fight the same bosses in the same stages that you fought as Nero and Dante, even when it makes absolutely no sense. Vergil's story opens decades earlier... but you still fight the same training battles against Dante that Nero fights in his story, in the same rooms.

It's baffling that so little was put into making these campaigns feel like their own story. I wasn't expecting a whole new, eight hour game, but expected at least an hour of new content for each character. While the combat moves are new, I wasn't too excited about fighting the giant fire horse-man-lion for the ninth time. I haven't finished either of the new campaigns.

This is, without a doubt, the definitive version of Devil May Cry 4. If you're a hardcore fan of the series and don't mind the extreme repetition, the Special Edition is worth rebuying. If you're new to the series, it's a good place to start. To dig my own grave: I actually like Ninja Theory's DmC reboot more than the original series, and I've been playing these games since day one. It's gross, dumb, and decidedly easier than the rest of the series (minus the monumentally dumb and easy Devil May Cry 2), but I enjoy its flow more and actually find its loud, stupid story endearing. It also features a more interesting female ally than any of the others in the series, even if she too gets kidnapped by monsters.

As much as I liked them at the time, I've kind of grown apart from the original Devil May Cry series. I still think the Dante of the third and fourth games is great, I still think DMC4 is a lot of fun until it starts repeating, but I don't have the patience for the first three games that I once did, and I care less about high scores and ranks than I ever did before. From pacing to campiness to combat, whatever the series did well, Platinum Games has since done better by a huge margin with Bayonetta, Bayonetta 2, and Metal Gear Rising: Revengeance. Those are my top three brawlers, with the DmC reboot coming in fourth and DMC4 following behind at a slippery number five.
Posted by surlaw at 10:44 PM