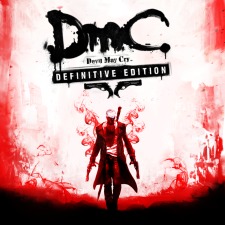 Since its 2001 debut on the PS2, the Devil May Cry series has grown a rabid fan base of all sorts; from those obsessed with high scores and perfect combos to those who love it for its relentless difficulty to those who, somehow, get really into its angsty melodrama, the series has earned quite a following across its four installments. When Capcom announced that it was being rebooted by Ninja Theory rather than following up on DMC4's cliffhanger ending, fans were suspicious.

When they showed off a new younger, punkier Dante, reaction ranged from apprehensive to downright fury. By the time the game came out in 2013, a vocal portion of the series' fans had already declared it unplayable blasphemy. Of course, a big part of being a fan of anything is to spend much of your time hating anything that diverges from your expectations. When I first played the demo, I was definitely turned off: It was massively easier than anything else in the series, contained the worst bits of dialogue in the game, and did a poor job selling its new hero.

Miraculously, the finished game came out and by the time I'd played it a couple of times, I changed my tune and it became my favorite game in the series. It wasn't without its flaws (it's slow, it was still too easy and there's some amazing dumb dialogue, which I've since grown to actually find funny, but it's going to make people cringe), but it wouldn't be a Devil May Cry game without flaws. The original game has a horrible camera, the third game has very boring environments, the fourth game repeats itself three times, and the second game itself is one giant flaw. A PS4/Xbox One port with a Definitive Edition subtitle was released in March of 2015, fixing a lot of the game's flaws. As it stands now, a good but messy game is now a great one with a couple of minor hitches.

To see just how extensively the game was changed, take a look at this twenty-three page change log. As a warning, it contains some spoilers, but most of them won't mean anything to someone who hasn't already played the game anyway. From stages to enemies to the way its score system works, DmC was massively rebalanced for the better. There's a new Turbo Mode that speeds everything up by 20%, which feels far better. Hardcore Mode ups both the difficulty of enemies and of maintaining a high Style Rank, essential for getting top marks on each chapter. Previously, you could button mash your way to an S rank without a lot of trouble; now, it actually takes effort to earn your grades. On top of that, the Bloody Palace, the game's progressively difficult arena mode, has been expanded, players can now manually lock on to enemies, and the DLC side story / sequel where you play as Dante's brother Vergil has been included.


Thanks to its bright lights and trippy stage designs, where the world itself is constantly writhing and trying to eat you alongside all of its monsters, DmC was already a pretty nice looking game. The Definitive Edition looks even better, with nicer textures and lighting effects, but what's really great is seeing it run at a steady 60 frames per second. With the higher frame rate and the new Turbo setting, DmC Definitive is a far faster, much more exciting game. Characters also get new costumes, so you can use the original series look for Dante if you wish. It doesn't carry over to all cutscenes, but it's still fun to have.


A big complaint about the original game was color-coded enemies: Blue enemies can only be damaged by Angel-type weapons, red enemies can only be damaged by Devil-type. The game held your hand and showed you exactly what to use and when, which just felt pointless at best and tedious at worst. In the new edition, enemies are still weaker to some weapons than others, but you're no longer forced down one weakness path and are much freer to do what you want. Gone as well are color-coded keys found throughout stages, used to unlock secret missions. Previously, you'd have to dig around for matching keys and doors back and forth across stages, a dumb and repetitive task. Now, any key opens any door, and the real challenge is surviving the secret missions, as it should be.

The story is largely the same, so if you were offended by it last time, you're not going to love it now. A couple of the dumber lines, a big one in the opening cutscene especially, have been removed, and Vergil ditched his goofy hat, but it's still the same old story: Dante, a half-demon, half-angel thug who mopes around sexy ladies and stinks up the dance floor, has his trailer-park paradise thrown upside down when he meets Kat, a modern day witch who prefers the convenience of Magic in a Can spray paint to traditional spellcasting, and Vergil, his long-lost brother who spends his days creeping on the internet playing Anonymous.

Their resistance movement has incurred the wrath of Mundus, the demon billionaire secretly running the world through the dread monster capitalism, and his flunkies: A plastic surgery nightmare who runs a radical disco, Not Bill O'Reilly (Bob Barbas) working over at Not Fox News (Raptor News Network), and a whole host of other lesser uglies. Dante, Kat, and Vergil fight the evils of big money in politics, childhood obesity, and dumb TV shows. Years back, Mundus killed the brothers' mom and dumped their dad in some kind of horrible leather prison. Now, everyone's mad at everyone and they're not going to take it any more.


It's an unbelievably blunt story with even blunter dialogue, but at least it's trying. I like all of its basic concepts and genuinely think it's pretty funny, but it could have used a rewrite or two before making it to final draft. Dante's an absolutely unlikable dumbass when the game starts, but as it goes on he actually grows into a better, more caring person in believable ways. It's not an incredible arc, but it's more than the series ever did with him before. Kat's a more human female lead than any of the other women in the series, but she still gets captured by monsters, of course. Still, she's got her own motivations and ambitions and her clever planning is essential to Dante and Vergil's success. She's not just a plot device or an exposition bot, and that's a addition to the series. I mean, she DOES exposit plenty, but everyone here does. She does other things too.


The DmC reboot plays it straight more often than Devil May Cry 3 or 4 did, but it's still a jokey game. Dante gets plenty of bad jokes in, we're introduced to him early on floating naked through the air with a slice of pizza obscuring his junk, and he has a swear off with Futurama's Slurm Queen. It was completely, utterly repulsive the first time I saw it; now, I laugh pretty hard. It may be going to far to say that the game as a whole is a work of satire, but its absurdities are intentional, and it's endearingly stupid. 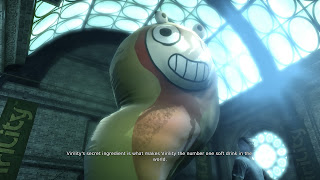 With its new, improved combat and visuals, the awkwardly titled DmC: Devil May Cry: Definitive Edition is my favorite game in the series. As a brawler and as a comedy, it still trails behind Bayonetta 1 and 2 and Metal Gear Rising: Revengeance, but it's so well paced and put together that it stands well above the previous games in the series. It's a shame there was such a heavy backlash before it even released, because this is the direction I'd rather see the series go in than a return to the old continuity for an eventual Devil May Cry 5. It doesn't have nearly the complexities of the combos seen in DMC3 or 4, so if that's your primary draw to the series you're going to be let down, but for me, personally, I've been on board with this series since day one and I just had way more fun here.

If I could change anything: I'd add a true Photo Mode. Sony spoiled me with it in Infamous: Second Son and The Last of Us Remastered. Now, I want every good looking game to have one. I'd probably change the terrible soundtrack too, but terrible soundtracks and Devil May Cry go hand in hand.