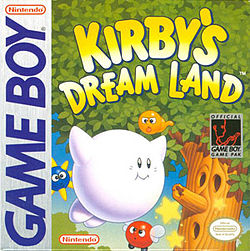 HAL Laboratories' 1992 Game Boy classic Kirby's Dream Land introduced a puffy new superstar to the Nintendo family who would shine for decades across genres and styles. From platforming to mini-golf to Breakout to ball-rolling to goofing off as a pile of yarn, Kirby's always been a pretty experimental series, but let's take a look back at the original title that started it all.

Kirby's Dream Land was designed and directed by Masahiro Sakurai, who would go on to direct a few of the game's sequels as well as the wonderful Super Smash Bros. series, the clever Nintendo DS puzzle game Meteos, and the recent Kid Icarus revival on the 3DS, Kid Icarus: Uprising. The game also featured the production talents of Satoru Iwata, long before he was president of Nintendo, and a fantastic soundtrack by Jun Ishikawa.

Today, Kirby is famous for eating monsters and stealing their abilities. In his premier platforming adventure, Kirby had not yet evolved this horrific ability. He can eat, fly, and shoot air in your face, but that's it, outside of a couple power-ups. It's a simple game, and it's very, very easy. 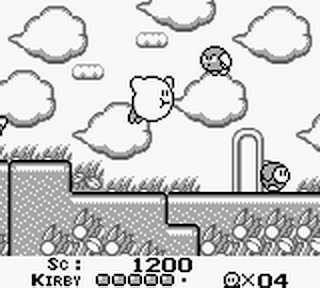 Dream Land is a straightforward platformer with four stages followed by a boss rush and a final battle with the gluttonous penguin-duck King Dedede, one of my all time favorite bumbling idiot villains. The ability to fly trivializes almost every section of the game, but even if you don't abuse flight, the game is still really easy. You can finish this one in under a half hour and if you've played enough games you probably won't see a game over screen. 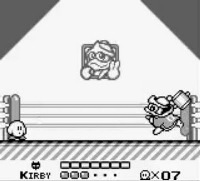 The question is: Does it matter? Honestly, the game is still very fun, and the 30 minutes it lasts are great. There's enough variety between platforming, boss fights, and the random side-scrolling shooter stage that it never gets dull. An easy game is only bad if it's boring. Kirby mixes up gameplay and environment enough to stay fresh for its whole brief run, and it doesn't overstay its welcome. If you played 10 hours of a game like this, it would get extremely dull. HAL was smart to keep this game tight and concise.

The graphics are nicely designed, well animated, and feature a ton of personality. Lolo and Lala from The Adventures of Lolo show up and cause trouble. King Dedede falls down a lot. Kirby gets huge and steals a castle. It's one of the most well drawn Game Boy titles, and it still looks good today. The soundtrack is among my favorite in the Game Boy's library, with the Castle Dedede theme being a standout.

It's a very easy game, but Dream Land set the cornerstone for what would become a star franchise. It's not the best in the series, with both Kirby's Dream Land 2 and Kirby's Adventure soon topping it, but it's still a wonderful, loveable time that's worth playing even today.
Posted by surlaw at 11:09 AM