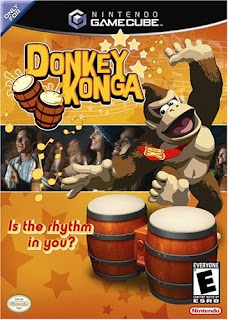 The GameCube was a weird time for Nintendo. Existing franchises were taken in unexpected directions, from a Luigi-centered ghost busting game launching with the system instead of a Mario Bros platformer to Metroid's graceful transition to first-person shooting to The Legend of Zelda's cartoony visual reinvention with The Wind Waker. Star Fox turned into a crappy Zelda knockoff with Star Fox Adventures,the only Kirby game released was a racing game, and after the successful Donkey Kong Country trilogy on SNES and Donkey Kong 64, Nintendo decided the system's Donkey Kong title should be a bongo-based rhythm game.

I appreciate their experimentation, and I like drumming; the drum's my favorite instrument in the Rock Band games and I'm a big fan of Namco's Taiko Drum Master. Unfortunately, Donkey Konga's a pretty bad game.

Released in September 2004, Donkey Konga was actually co-developed by Nintendo and Namco. Using a set of plastic bongos with a built-in microphone, players slap and clap to the beat, as notes stream from right to left. Sometimes you have to hit both sides at once, sometimes you've got to do drum rolls. There isn't much to it, and the main challenge comes from the higher difficulties, where tons of notes stream at you rapid-fire. The same team at Namco went on to develop Taiko Drum Master, which uses nearly identical game play but with a plastic drum and sticks. It was released on the PS2 in North America a mere month after Donkey Konga, which just makes Konga look worse in comparison. While Taiko Drum Master is colorful, cute, and has decently charted songs, Donkey Konga is an ugly mess.

I've never liked the art style of Rare's SNES/N64 Donkey Kong games, and it's on full display in all its ugliness in Donkey Konga. It's a style that just looks clunkier as it ages, and it didn't look very good to me even when it was new. Almost all of Nintendo's titles have nice art design, but I've just never enjoyed how Donkey Kong looked in these games. Rare's Star Fox Adventures has equally hideous art design, so I'm putting the blame on them here and letting Namco off the hook.

The most important parts of music games are the song list and the quality of charting. A poorly charted song, where notes don't show up where you expect them or don't follow a fun or comfortable pattern, is incredibly frustrating, and it's a problem that plagued a bunch of songs in Guitar Hero. Rock Band, for the most part, has high quality charting. Donkey Konga's charting is mostly passable, but it's also just super boring. Easier difficulties offer nearly no variety, and slowly clapping to a song's beat for four minutes isn't really fun at all. Higher difficulties just feel sloppy.


The song list is a mix of 70's pop hits, a couple almost modern songs, some video game music, and exciting hits like Twinkle Twinkle Little Star, She'll Be Coming 'round the Mountain, and Itsy Bitsy Spider. If you ever heard a children's lullaby and thought, "I'd like to play the drums along this sleepy song," Donkey Konga may be for you. I'm perplexed. There are plenty of percussion heavy popular songs, and while Queen's We Will Rock You makes sense as a clapping song, it's about as close to zero note variety as you can get. Did anyone really think Dancing in the Street and Louie Louie would make good drum songs? There's a bunch of good music in here, but most of it just doesn't work as the track list to a drumming game. It's almost entirely songs where the drums just keep a steady, slow beat, never doing anything exciting.

Donkey Konga would get two sequels, with the third game never getting released outside of Japan. I never played the second one, and was pretty happy when I could sell back the first game for more than
I paid for it. It's the most dull rhythm game I've played, and its legacy lives on in the Smash Bros games, where Donkey Kong pulls out the bongos for his Final Smash super move and players have to tap buttons to the beat to damage their opponents. Like Donkey Konga itself, this Final Smash is dull, ineffective, and disappointing.