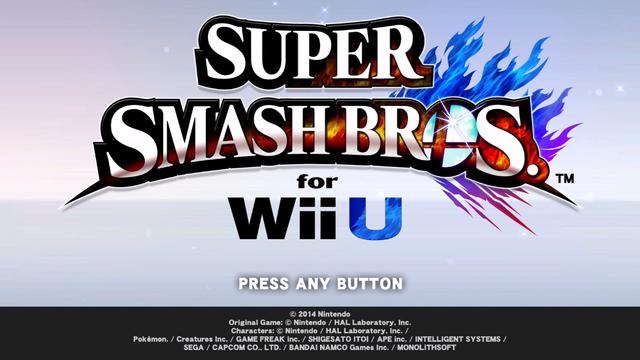 With the fourth incarnation of their Super Smash Bros. party fighting series, Nintendo decided to release both a console and handheld version. The 3DS version, released October 3rd, is a decent but barren game with pretty terrible online play and, depending on your comfort with the 3DS itself, awkward controls. The Wii U version, released November 21st, takes everything good about the 3DS game and makes it better. Graphics, sound, and control options are obviously improved, but there's also far more content for both single and multiplayer fights and an online system that, while still lacking, is much more stable. This is the definitive version of the game.


As is appropriate to this game: For this review, I'll be recycling a bunch of content from my 3DS review and improving on it.

The 3DS version of Smash Bros. sadly did little to improve Brawl's mess of an online system. While the game itself had grown and improved, it was still stuck with Friend Codes, no messaging options, no sorting options, and pretty awful lag. Error codes also popped up way too often when trying to fight with friends.

Thankfully, with the new Wii U version, things are finally almost right. The U uses usernames instead of codes, so adding friends is way less of a chore, and battles are way less laggy for me, even though I'm playing on a WiFi connection and not a hard wired one. You CAN send friends messages, but not while you're in a lobby. There still aren't any options to match by skill/region/connection strength. Well, at least the lag's mostly gone. You still can't play Stock mode outside of the ranked "For Glory" version of online play. "For Fun" players are stuck with Time matches unless they're playing with friends.

Smash Bros. U controls wonderfully and allows you to use any Wii compatible controller you like, including the Gamecube controller if you've got an adapter and the 3DS itself if you're really desperate. Its visuals are fantastic, filled with bright, gorgeous colors and wonderfully expressive characters whose great little details were largely lost on the 3DS due to its small screen size. The U/3DS version adds 17 characters (Counting the three custom Mii character classes as separate characters,) including third party guest characters Mega Man and Pac-Man. Pac-Man has quickly grown to be one of my favorite characters to play. Sadly, the Ice Climbers, Ivysaur, Squirtle, Lucas, and Metal Gear's Snake were cut from the roster. Star Fox nemesis Wolf was cut too, but who cares?

The new characters all feel great (Pac-Man and Punch-Out's Little Mac are my favorite new guys, Duck Hunt's hilarious and Bowser Jr. is surprisingly fun) and some returning characters have been nicely tweaked (my King Dedede and Bowser play feels a lot stronger this time around.) The stage selection is different from the 3DS version, and while I'm sad to lose Earthbound's Magicant and the wonderful SNES F-Zero stage, the selection here is pretty good. The Game & Wario stage is a lot of fun (though I wish classic Wario Ware was included too) and Duck Hunt gets a simple but fun stage. I like the new Pikmin 3 stage a lot more than the old Pikmin world, and though the Great Cave Offensive looks really nice, it's too big to really work. Each stage has an optional Omega mode that's simply a flat version of that stage.

The Smash Run mode from the 3DS is gone, replaced by Smash Tour, a board game where you move Miis around collecting fighters and power ups, occasionally crossing paths and getting into fights with three other players. Like Smash Run, it's conceptually but not actually a lot of fun to play. If you're a giant Mario Party fan, maybe you'd get more out of it than I did.

Classic Mode is Smash's arcade mode, with players facing off against a series of opponents before fighting a final boss (Master Hand, Crazy Hand, both, or the new Master Core, depending on difficulty level selected.) In the 3DS version, players selected branching paths on their way to the end. For the U version, players move a trophy of their selected hero around, bumping into other fighters. It's effectively the same thing, but I found the 3DS version's interface faster and simpler. On top difficulty levels, there's a new Master Fortress boss that isn't present on the 3DS.

Fleshing out the single player content is Event mode, which has been absent since Melee and wasn't in the 3DS version. Players are given a series of challenges that can be cleared however you like, or cleared in specific ways (usually time limits or difficulty levels) to unlock special items. There's a good number of missions, and most are pretty fun as long as you don't stress out about 100%ing everything. There's also a new mode called Special Orders, in which players can take big risks for big prizes in specialized matches. Most of these modes can also be played with two players.

The stage builder from Brawl returns in the U version, but it's way better this time. You can draw stages freehand on the tablet's touchscreen (one of the few places you can use it at all; weirdly, you cannot tap on the game's menus or character select by touchscreen. This seems like an odd oversight) and create some truly weird worlds, and surprisingly, can use them in online battle with friends. It's been fun making both nice stages and completely broken ones.

There are more character trophies to collect here than in the 3DS version, and this time it actually tells you which game they're from. I have no idea how that could be left out on the 3DS. There's a photo mode that lets you move, rotate, and resize up to four trophies, creating goofy little dioramas. I love this.

Masterpieces, the mode in which you can play short demos of classic NES/SNES games, is back after skipping the 3DS version, but the two games I checked out seemed wrong. Super Mario Bros' colors looked off from how the game normally looks (and how it looks on the Wii's Virtual Console) and Zelda 2 feels very choppy compared to its Virtual Console brother. It's a cool feature to have, but I'm not sure why it seems to have sloppy emulation.

The final new, nutty thing added is 8 Player Smash. If you can wrangle up enough controllers, you can now play with up to eight people on specific stages. It's complete chaos (even more than usual) that becomes very hard to follow, but it's great for a laugh.

Overall, the Wii U version of Smash Bros. is a huge improvement over the 3DS one just for comfort and audio/visual aspects alone, but the new features also make the 3DS version feel like a really big demo. The 3DS game had no ending videos and no pre-titles intro, both of which are added here. The U version just feels like it had more love put into it, and obviously it's more fun playing with a group of friends on a TV than on handhelds separately.

If you're only going to pick up one version, go with the U. This game, Mario Kart 8, Mario 3D World, and Bayonetta 2 sold me on the system, and I hope it can keep some of this momentum going into 2015. As I don't really have much interest in gaming when I'm away from home, I'll probably sell off my 3DS copy now that I've got this one.