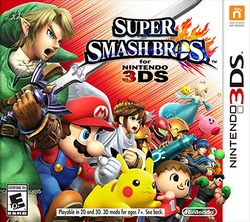 Six years later, a new Smash Bros was released on the 3DS, with the uninspired title "Super Smash Bros. for Nintendo 3DS." A Wii U version of the game is scheduled for release in late November. I was hesitant to pick up the 3DS version, planning on waiting for the Wii U release, but the game's demo sold me on it. Smash Bros. 3DS controls smoothly, looks as nice as it possibly could on this system's small screen (I've got an original model 3DS, and am envious of people playing it on an XL), and adds another 17 characters (Counting the three custom Mii character classes as separate characters,) including third party guest characters Mega Man and Pac-Man. Pac-Man has quickly grown to be one of my favorite characters to play. Sadly, the Ice Climbers, Ivysaur, Squirtle, Lucas, and Metal Gear's Snake were cut from the roster. Star Fox nemesis Wolf was cut too, but who cares?

Smash Bros. 3DS is an extremely well made fighter with some very frustrating rough edges. The games I've played with friends online have been good when they've worked (more on that later), but none of my local friends have any interest in the 3DS at all, so I'm stuck with online play and the game's fairly small single player modes for now until the Wii U version comes out and we can play it together on a big screen.

The new characters all feel great (Pac-Man and Punch-Out's Little Mac are my favorite new guys, Duck Hunt's hilarious and Bowser Jr. is surprisingly fun) and some returning characters have been nicely tweaked (my King Dedede and Boweser play feels a lot stronger this time around.) Most of the stages are, smartly, smaller in scale to account for the smaller screen size, though a few still get a little hard to see with four players. Each stage has an optional Omega mode that's simply a flat version of that stage. A nice option for some of the scrolling stages, since I like their aesthetic but not the scrolling aspect.

Brawl featured an extensive campaign mode called Subspace Emissary, featuring minor enemies from dozens of game getting in your way as you barreled through stages, facing bosses and other hazards not found in the game's multiplayer modes. It wasn't the most well made campaign, but the cutscenes were wonderfully silly and it worked well enough. Smash 3DS replaces this with Smash Run, in which players have five minutes to run through a dungeon fighting similar monsters to the ones found in Subspace and collecting power ups. At the end of five minutes, players face off in either a traditional Smash battle or some sort of race. It has no online play, so with no local competition it hasn't held my attention. There's no story or fun cutscenes this time.

Classic Mode is Smash's arcade mode, with players facing off against a series of opponents before fighting a final boss (Master Hand, Crazy Hand, both, or the new Master Core, depending on difficulty level selected.) This is a pretty fun arcade mode, and players can choose from a very wide range of difficulty levels and select different opponent branches along the way to their destination. The new final boss is a pretty fun fight, and I had a good time running through this mode a few times. It's probably the best arcade mode the series has seen.

And now, the game's real problem. In the six years since Brawl, online gaming on consoles has grown in scale and complexity, and yet the new 3DS game has the exact same problems its predecessor does. There are more options for fighting now: We've got standard four player free for alls (timed matched only and not stock, sadly), team based battles, and one on one, no item matches. But there are still somehow no options for matchmaking. You still can't sort by region or by skill, and you can't view a player's connection strength before the fight starts. If you're lucky, everything goes smoothly, and it's usually fine in one on one fights. If you're not, you'll get a bunch of error messages before a fight even starts, and then when the fight does start it's back to the one frame per second laggy slideshow that made Brawl so messy.

Ideally, I'd only play with friends and not random players, but no one's schedule works out in a way that allows that. I don't mind playing with strangers, but with friends, I know that we've all got strong internet connections and no lag. When we can play, it's flawless. The problem is "when we can" doesn't just mean "when schedules line up." There's still no internal messaging service, so while I can tell my friends are online and playing the game, there's no way to poke them and ask if they want to make a lobby. Half the time when we do communicate and make a room, we get error messages trying to join each other's rooms. 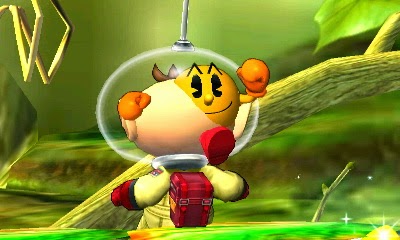 With Pokemon X/Y, Nintendo established a great online system that let you challenge and trade with friends at any time with a few clicks. No external chat needed. With Mario Kart Wii through Mario Kart 8, Nintendo added brief, pre-written messages that at least allowed you to say basic stuff like "one more game" once you were in a lobby together. Smash 3DS features none of these things, and feels like a throwback to the worst parts of early online console play. It's absurdly bare bones and clunky, and spoils what's otherwise a very fine game.

I want to stress that I really love the core fighting, the art design, and the music here, but I'm completely let down by this game's online play and find Smash Run mediocre. It's a great game, and if you've got local buddies with 3DSes to play it with, you're all set. But Smash deserves better than the sloppy systems here, and I'm hoping that the Wii U version corrects at least some of its online problems. Given how little improved between Brawl and the 3DS edition, my hopes are pretty low, but at the very least we'll still all be able to get together and play it on a TV. If you've got the option, wait for the U version.