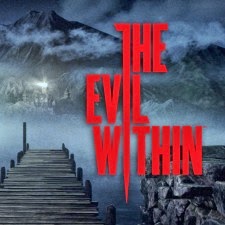 One of the rules of video games is that if Shinji Mikami directed it, I'm probably going to like it. From his directorial debut with 1996's Resident Evil to the perfect, ridiculous brawler God Hand in 2006 to the wonderful robo shooter Vanquish in 2010, Mikami has tackled a number of genres and proven himself an expert at adapting his off-beat humor and detail to all of them. Even with Resident Evil 4 in 2005 Mikami showed an experimental side, taking the series he started and shifting it from zombie b-movie horror to a creepy, funny mix of 70's European horror and 80's American action movie bravado. His latest title is the first from Tango Gameworks, a company Mikami founded after Vanquish was completed. With The Evil Within, Mikami returns to the survival horror genre he helped father, writing a love letter to horror, both games and movies, then and now.


Click here for a screen shot gallery taken during my play through, focused mostly on the game's environments rather than its combat. 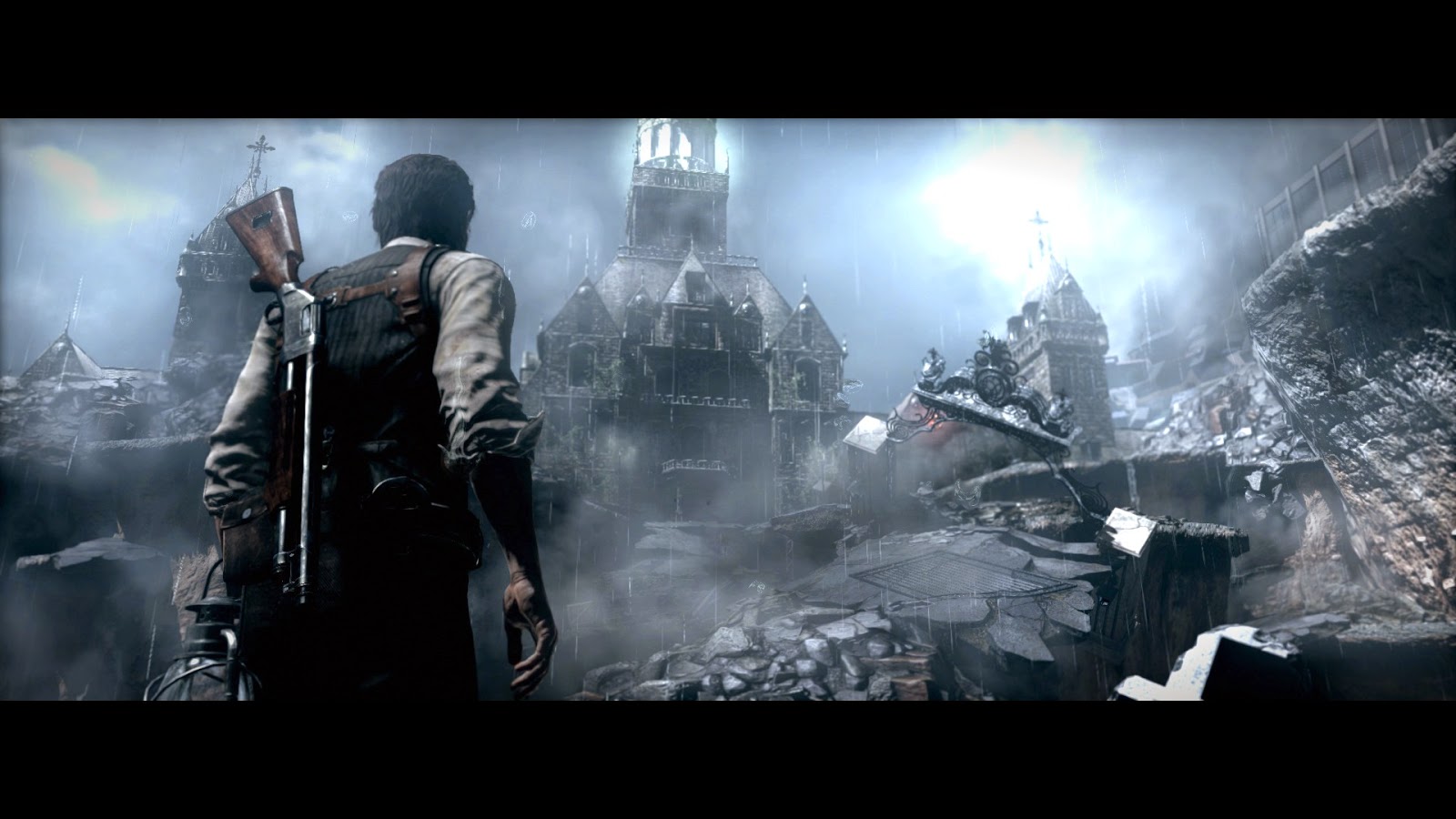 The Evil Within opens with detective Sebastian Castellanos arriving at a horrific murder scene at a local mental hospital. Patients and doctors are dead, police cars are scattered on the grounds, and Sebastian and his partners Joseph Oda and Julie Kidman quickly run afoul of the vengeful ghost of Ruvik, a burned up man who sends the trio down a long, surreal voyage into a nightmare world he controls. Ruvik is this game's Freddy Kruger, only without his sense of humor.

We learn early on that Sebastian and company, along with a host of other characters, are trapped inside of Ruvik's psyche by some sort of magical science machine whose functions aren't really important. There's elements of both The Matrix and Inception here, as our wired-in heroes struggle to wake up from this horrible dream and stop Ruvik along the way, whatever it is he's trying to do. There's a question of when exactly Sebastian gets wired into the dream machine, but I'm pretty certain he's in there before the game even starts, which leads me to question what information can be trusted, who really knows what's going on, and whether any of it matters. The ending is equally up for debate, though I've got a clear belief there too. 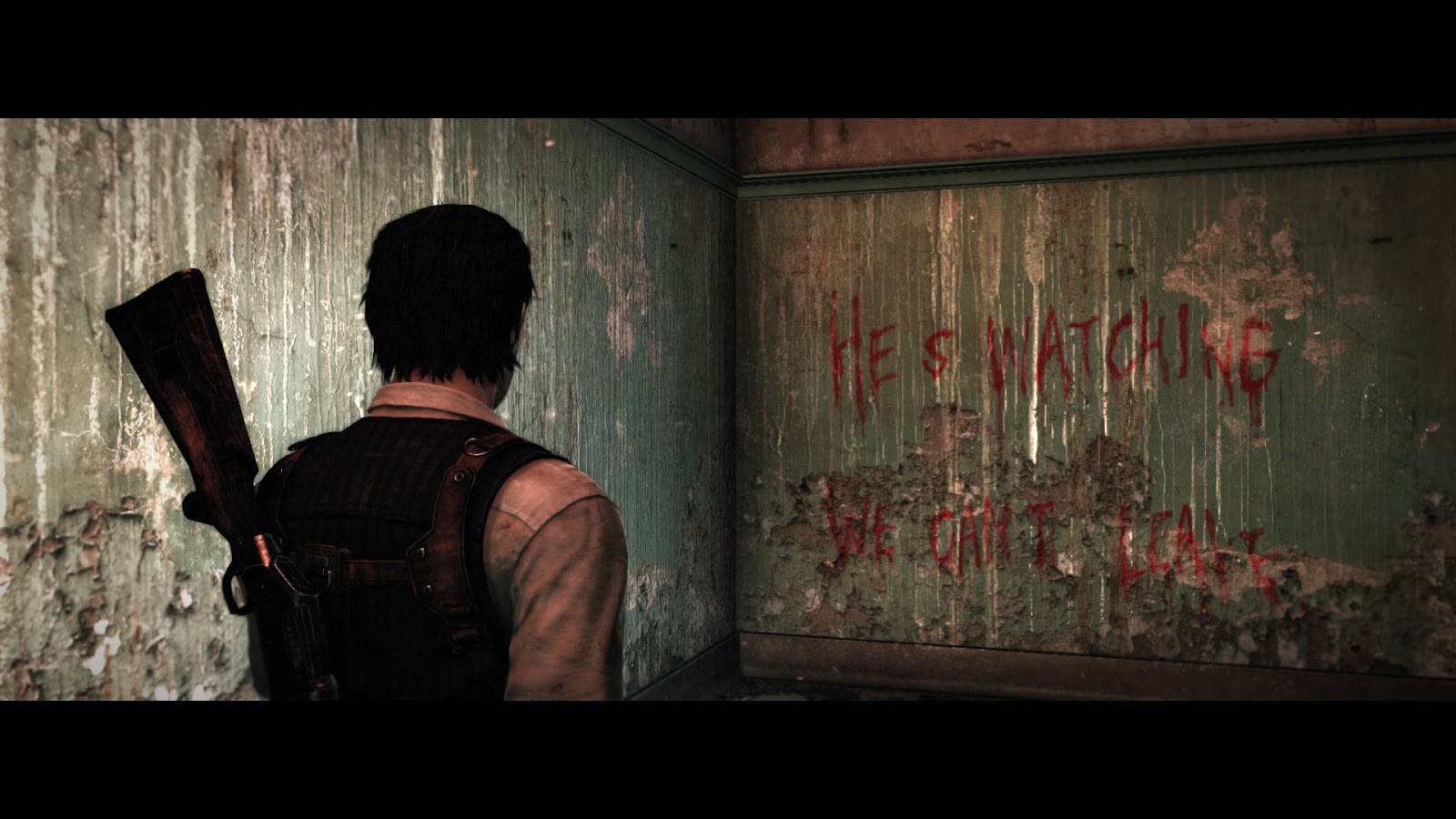 The tone of the game does a great job in keeping with the feeling of being lost in a dream, and by that I mean there's really no one tone. Content ranges from some really unpleasant Saw-like horror to traditional zombie encounters to the mundane horror of broken down houses to a chase scene with a giant monster fit for a fight with Godzilla to urban warfare to surreal, trippy imagery. There's ghosts, there's mutants, and there's hungry sea creatures.


Evil Within's horror references range from general genre and tone to specifics; Mikami references his own work with the first zombie you encounter, introduced with the same camera work as the first zombie in Resident Evil. Later in the game you end up visiting a mansion that's familiar yet off (like most dreams) from what Resident Evil fans would expect. A monstrous black-haired girl crawls across the floor stalking you, in a callback to popular Japanese ghost horrors like The Ring and Ju-On: The Grudge. A pair of relentless demons with strange metal head pieces have a show down with Sebastian towards the end that feels like a very specific reference to the final encounter with the twin Pyramid Heads at the end of Silent Hill 2, albeit with more guns and explosions everywhere.

It's easy to criticize Evil Within as not knowing what it wants to be, as it tries to cover a dozen different types of horror, but I think that's part of what makes it work. It knows exactly what it is: The experience of being in an actual dream, where rules, logic, and physics shift wildly, leaving you confused, scared, and sometimes mad. Sebastian's body speeds up and slows down; hallways are repeated. Every now and then his eyes open and he gets a very brief, distorted look at something that may or may not be the real world. It's not a particularly well told story, and its dialogue is decidedly mediocre, but this game captures the dream state so well through both directing and art design that I felt completely engrossed by what it was doing. Sure, there's an evil organization at work here that never really makes sense, but I didn't really care about that part making sense.

The biggest shame with the story is Sebastian himself. Over the course of the game, he shifts from being confused and afraid to finally being mad as hell and sick of being toyed with in this dream world, and this works pretty well. As he gets angrier and more fed up, he gets bigger weapons and is able to wipe out bigger groups of enemies. The problem is that he actually has a pretty good backstory, but it's almost entirely contained in supplemental newspapers you find in your hospital safe zone in between areas. 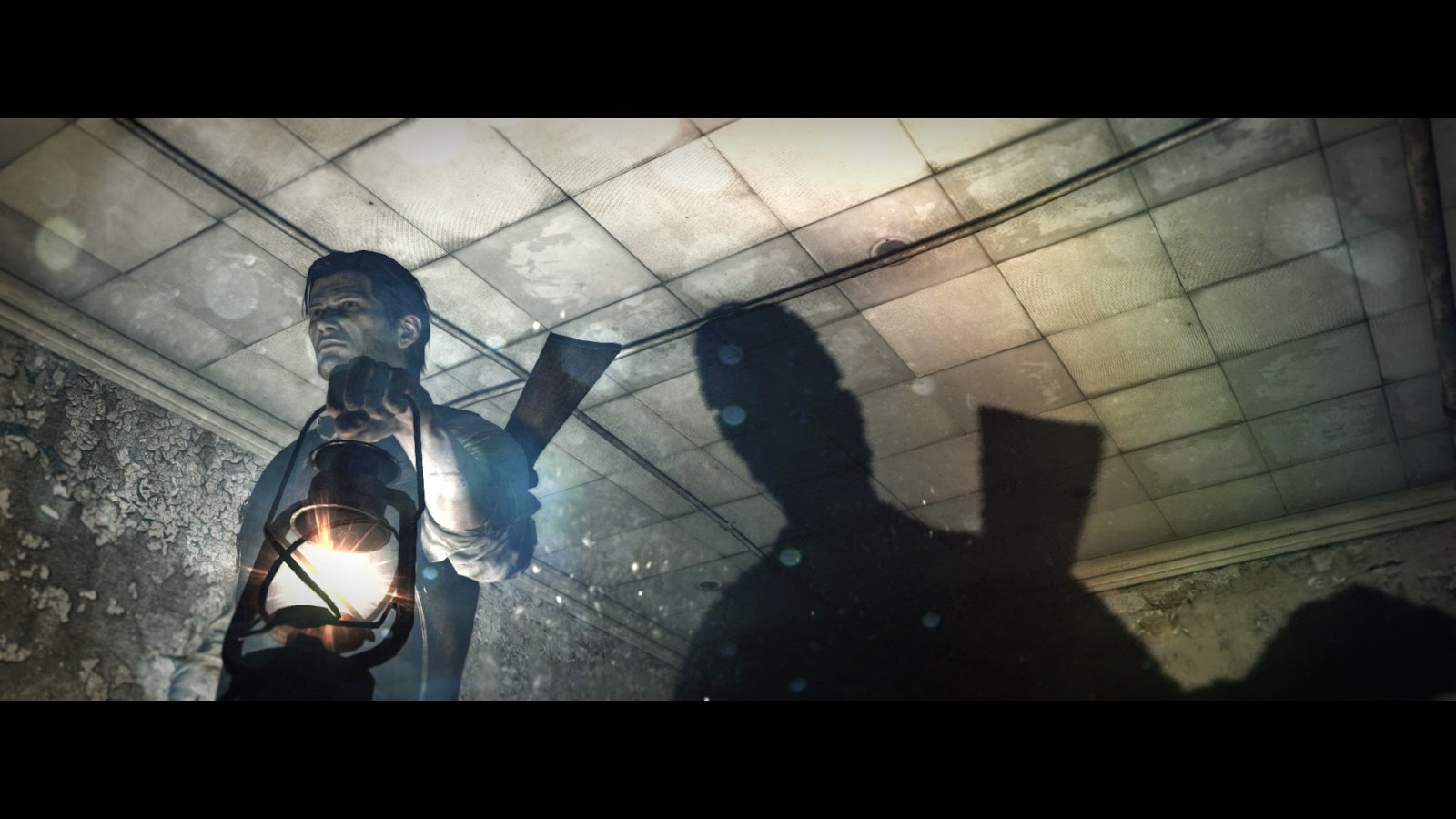 Before the events of the game, Sebastian and his wife lose their daughter in a house fire; his wife begins obsessing over it being no accident and allows conspiracy theories to consume her. Sebastian instead falls to alcohol and becomes a complete mess (funny enough, bottles of booze are a great way to distract and disarm the demons he encounters in the dream world.) His wife eventually disappears, whether by leaving him or by being abducted. Sebastian believes the latter, but it's hard to take any facts he gives in a dream at face value. I was hoping that any of this would matter to the game's world, as we learn that the people wired into the dream world are able to influence/see things in it that matter to them in some way. Instead, it's thoroughly ignored outside of what's essentially hidden content. Because of this, Sebastian never gets to grow as a person and confront his issues, even when they're very briefly brought up.

Game play is a mixture of the third-person shooting found in Resident Evil 4 (down to some nearly identical villager zombie enemies) and the stealth/distraction elements of The Last of Us, but it doesn't do either as well as those two games do. You're encouraged to avoid enemies and conserve ammo, and can do so early on, but soon enough you're left with no choice but to fight waves of enemies, and since the gun play is serviceable but not great, it's not a whole lot of fun. The bosses are pretty exciting, but the normal enemies are more of a chore than anything else once the game becomes more about fighting. 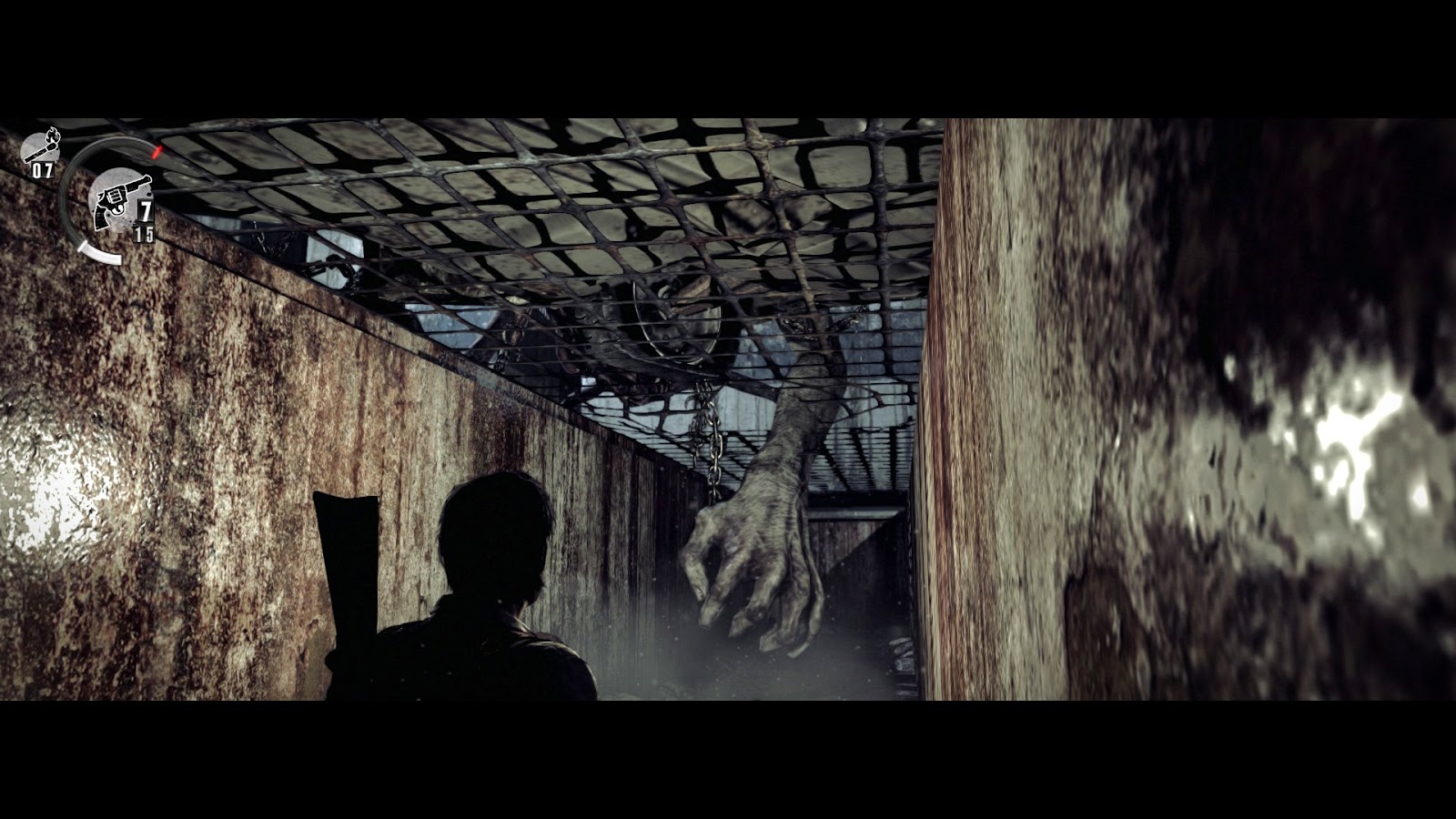 Using Green Gel found hidden in stages and dropped by defeated enemies, Sebastian's weapons and attributes can be upgraded. You're going to want to boost his stamina right away, since this full time cop gets out of breath from running after a pathetic couple of seconds, and his gun accuracy, since you're going to miss a whole lot of shots you shouldn't miss otherwise. 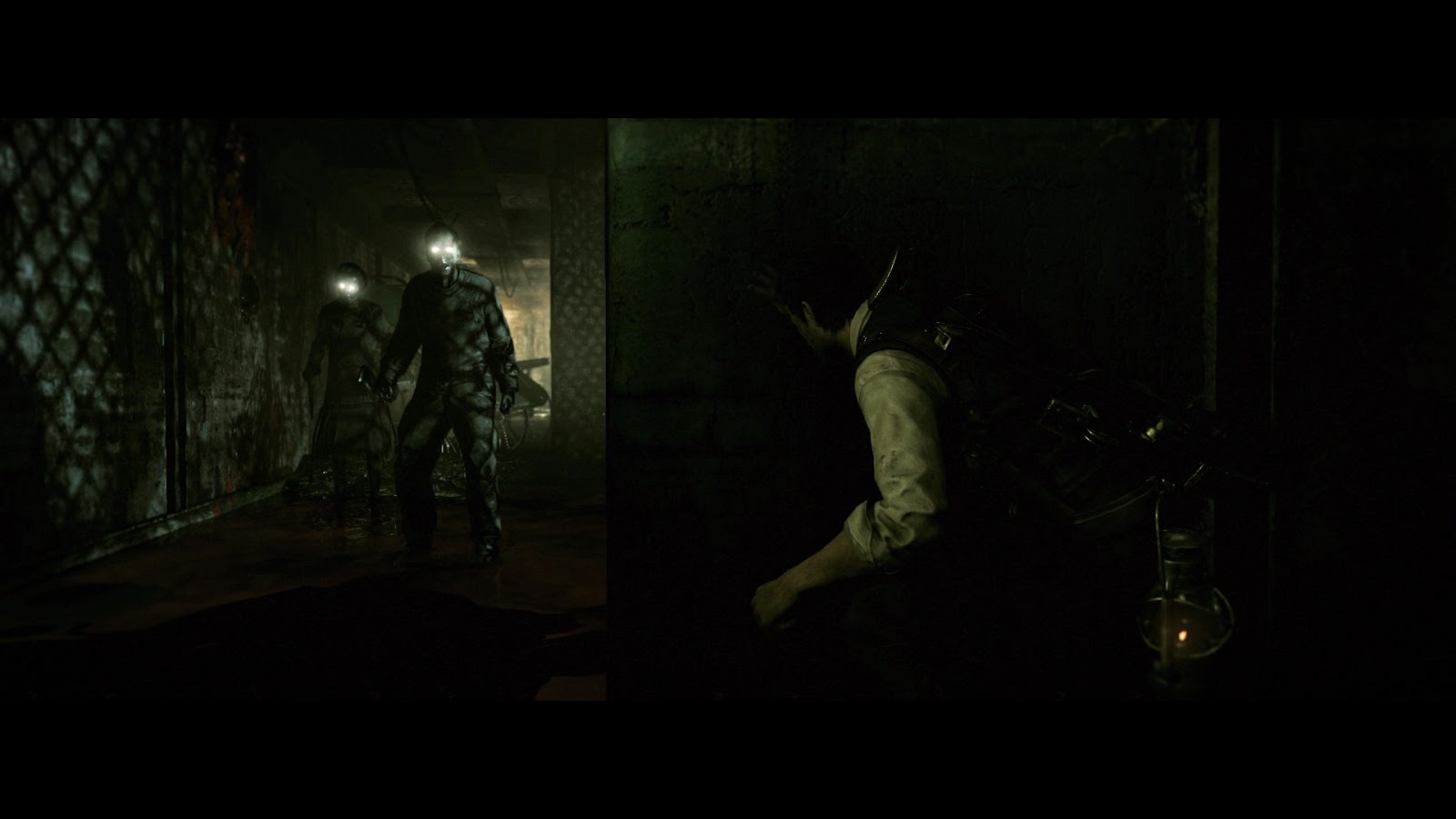 Unlike some games, where leveling up accuracy reduces your gun's sway and recoil, Evil Within's aiming reticle stays pretty still and instead your shots will randomly erupt way outside of where you're expecting to hit. You can have a shot lined up perfectly right in the center of an enemy, fire, and see your bullet hit way off to the right. It's extremely frustrating since skill really has nothing to do with it, and while it can be improved through leveling up, I just find that tedious. Leveling up the number of matches you can carry is also a must, since they're used for instant kill attacks on enemies that you've knocked over. You'll need to get good at using matches in order to avoid running out of bullets. 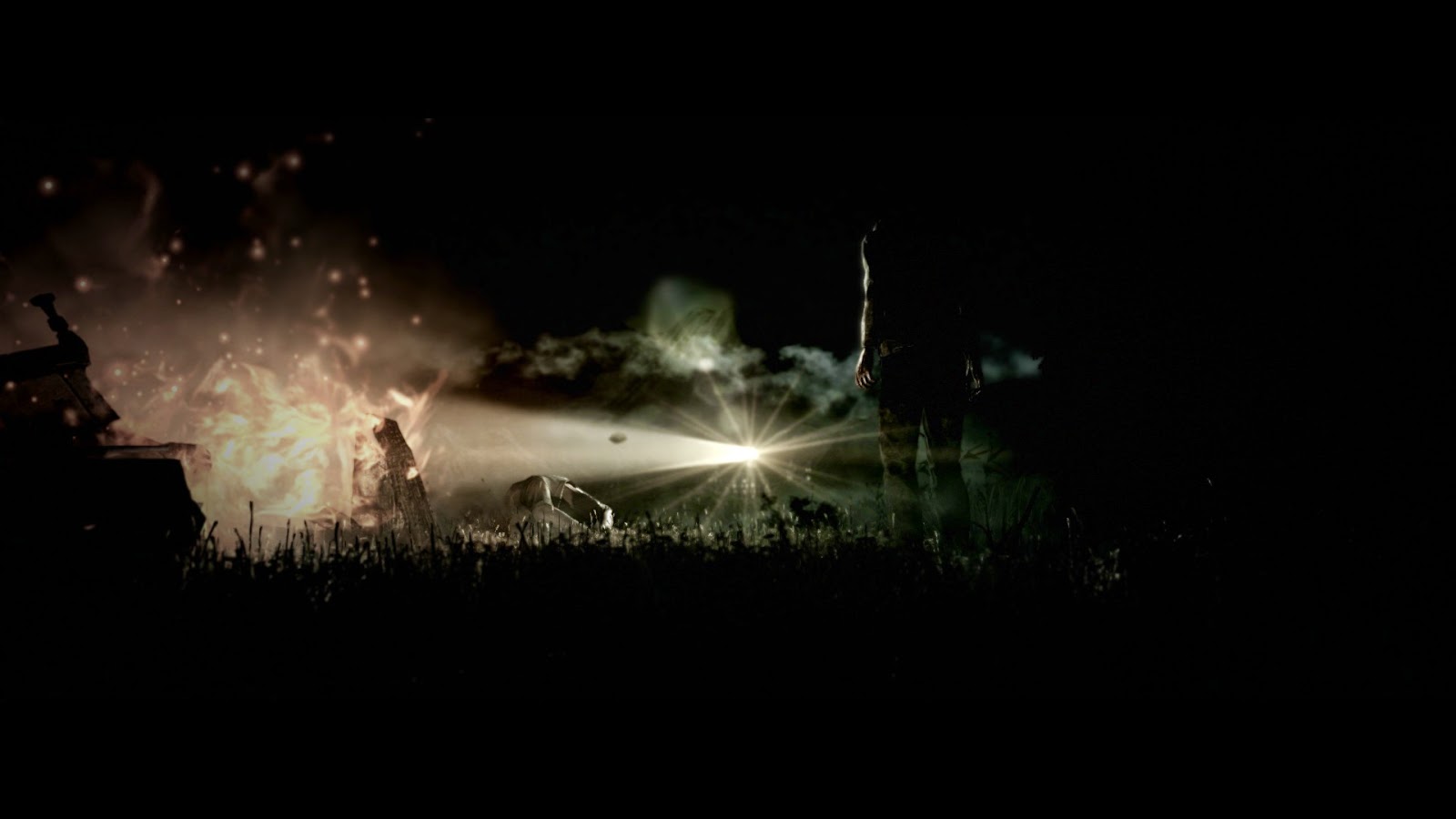 Evil Within's visuals aren't the most detailed and a lot of its environments are sparse, but the art design is strong enough for me to overlook that. Its frame rate is generally stable, though it struggles if there's a lot of fire on screen, and its textures are mostly sharp with a few noticeable, but unimportant, objects you'll come across. The camera is way too close to Sebastian, especially when aiming, and I would have preferred something closer to the way the camera works in Last of Us. There are also very large letterboxes on the top and bottom of the screen at all times, which is a fair cinematic choice but annoying for game play, since there were a few times that I missed key items and wandered around confused because the button prompt to use them was obscured by the letterboxing. I'm wondering if this was necessary to get the game running on the PS3 and 360, but then wonder why the PS4/Xbox One versions wouldn't have an option to turn them off. The PC version does have a workaround for it, though the developers don't recommend it. 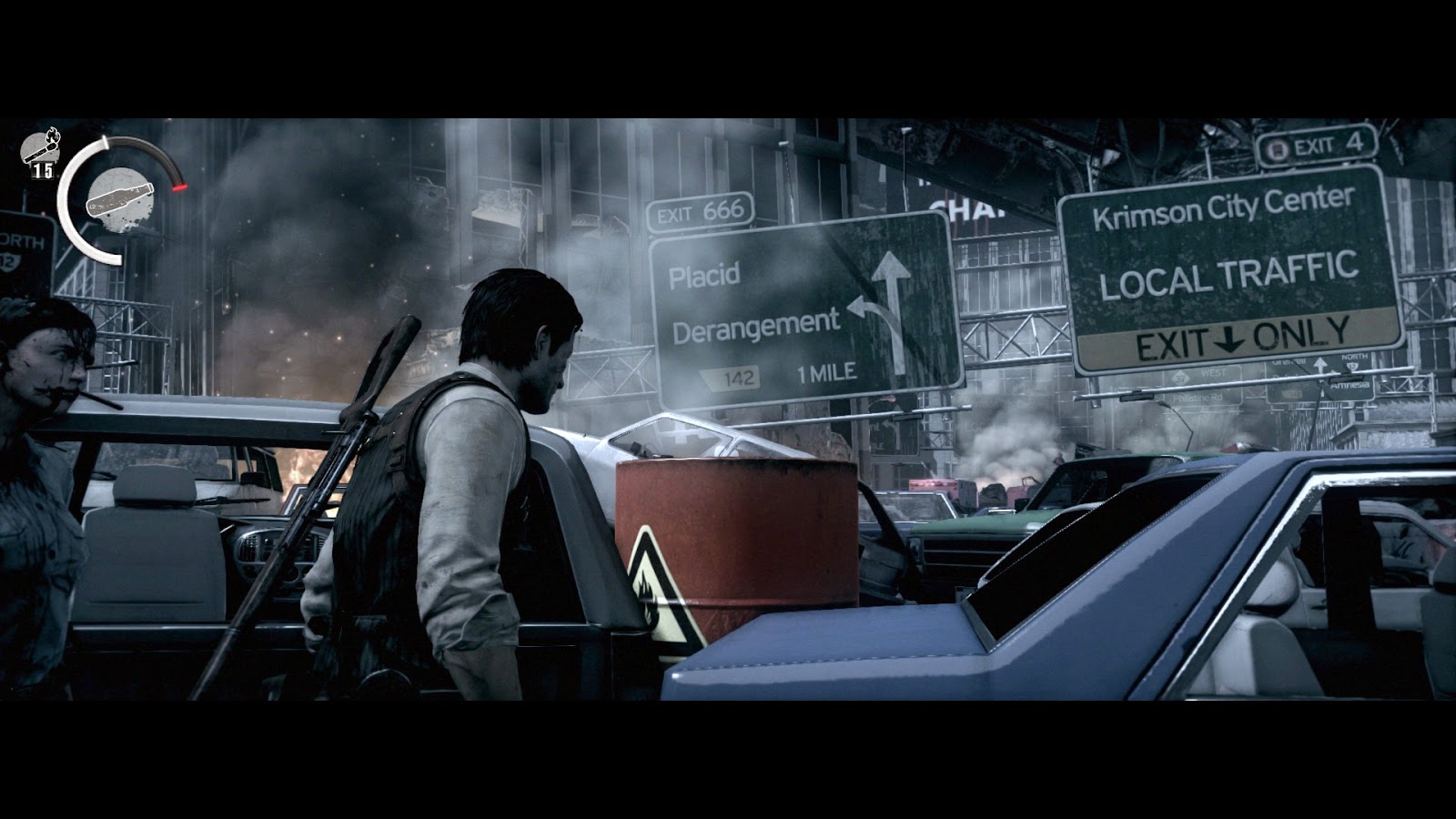 I'm surprised this game's actual game play is clunky, since Mikami's Resident Evil 4, God Hand, and Vanquish are so perfectly designed. The checkpoint system here is also sloppier than in any of those games and there are too many instant kills from enemies and traps that are hard to see your first time through an area. In spite of all that, I still think it's a good game and well worth playing, but I'm hoping the next project he helms at Tango Gameworks smooths out the rough edges seen here. It took me around 16 hours to finish the game, which is just about as long as it needed to be. 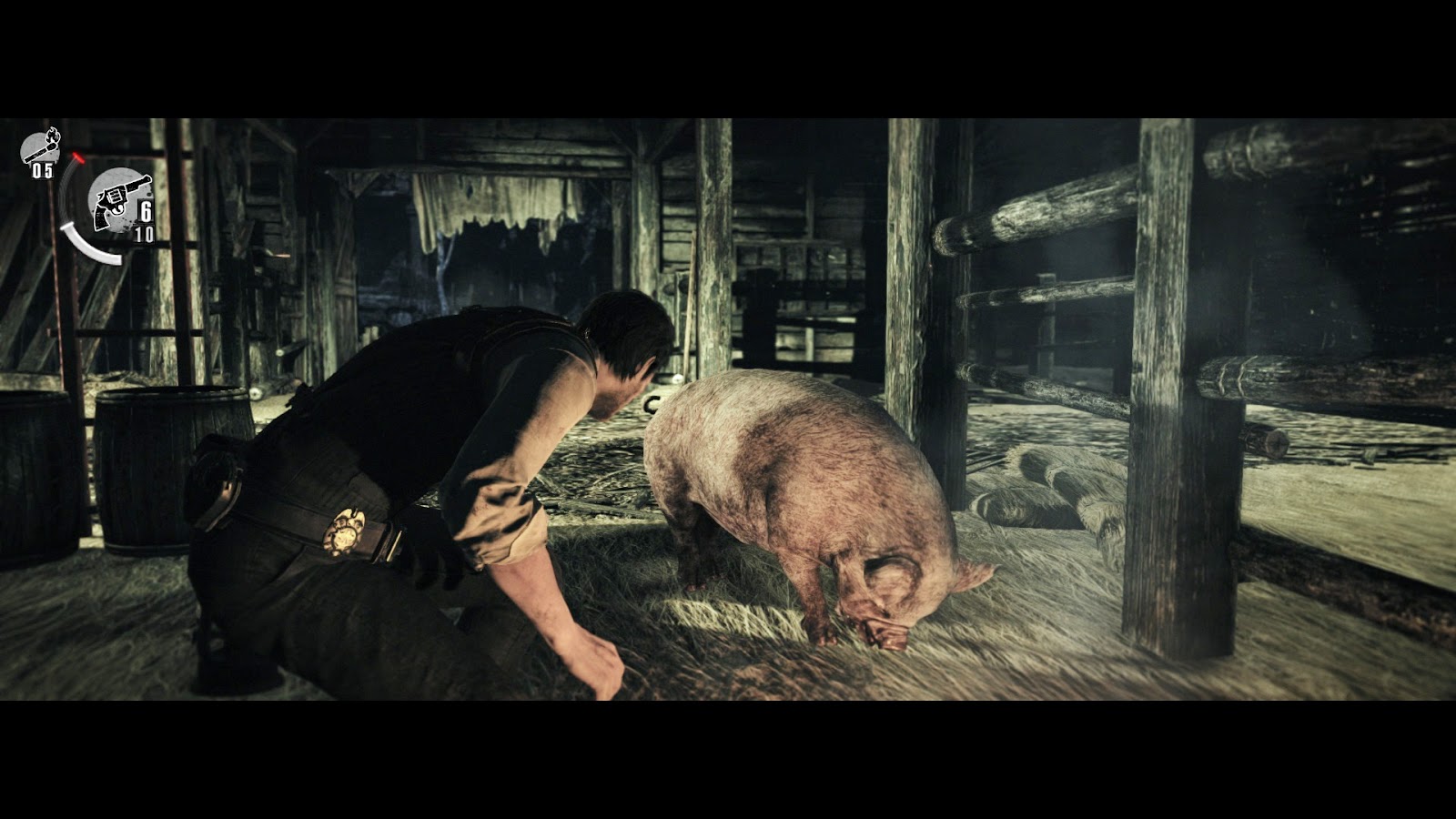 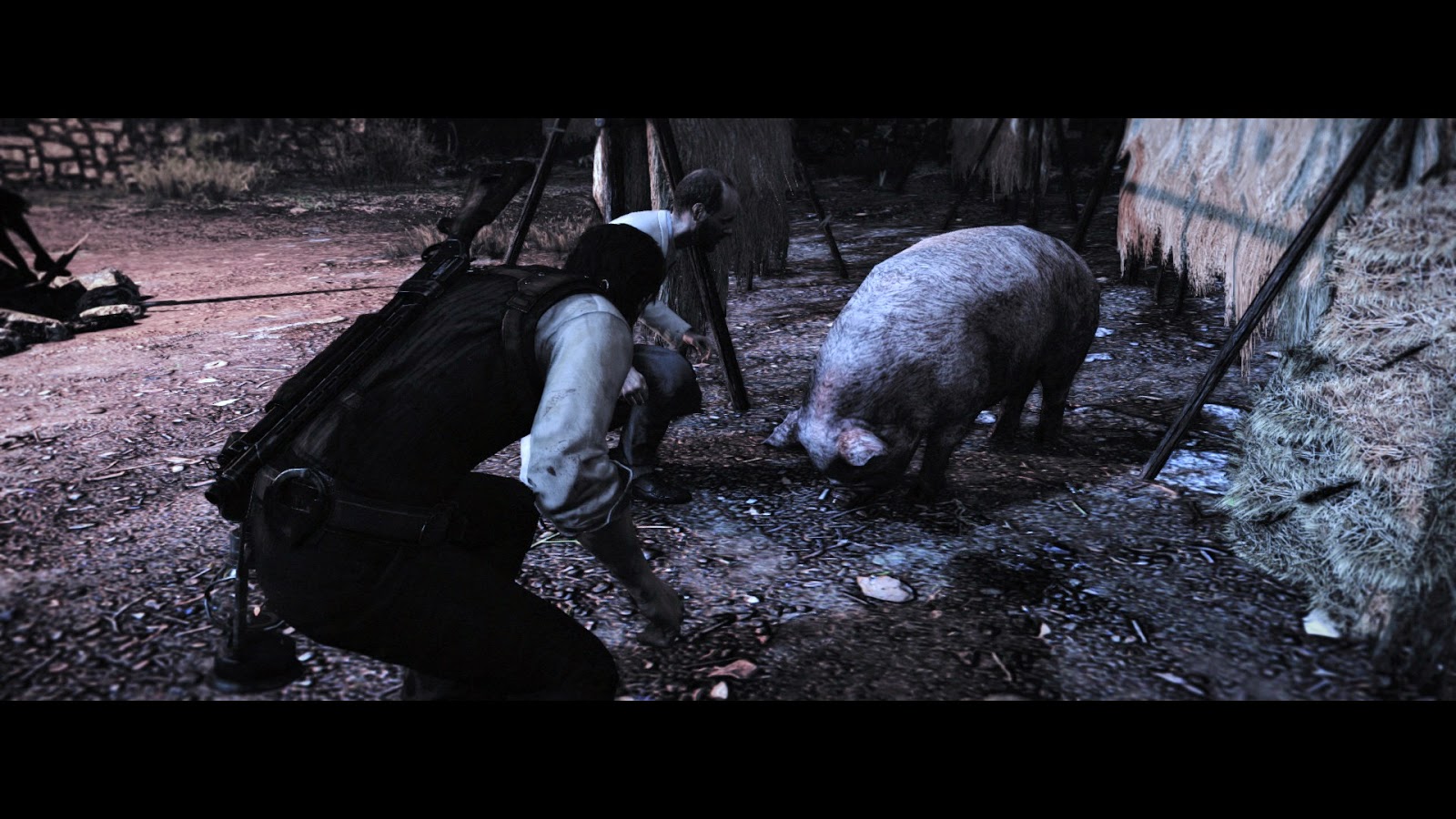