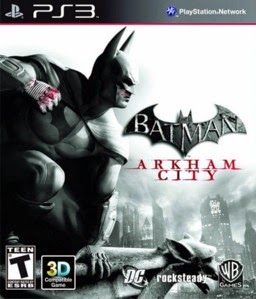 With 2009's Batman: Arkham Asylum proving to be a massive critical and financial success, a sequel was inevitable. Two years after Asylum's release, Rocksteady Studios would release their followup, offering players a much larger world, a bigger narrative, and more of the same combat. Arkham City abandons the claustrophobic, guided experience of Arkham Asylum, replacing it with a fairly large open world that offers much more freedom but at the cost of Asylum's relentless atmosphere. While the game play has improved, Arkham City suffers from a very poorly written storyline and continuous dialogue that drags down the experience.

Like Arkham Asylum, City is all about running around beating up enemies either head on, from the shadows, or via Batman's various gadgets. At its basic level, direct combat is simple, relying on a rhythm between punching, countering and dodging that becomes second nature pretty quickly. Enemies only become a threat when armed with guns, which are incredibly lethal, forcing players to clear rooms of foes in more creative ways. These combat puzzles are the best part of the game, and always offer a variety of possible solutions. Boss fights are also massively improved this time around, and the final battle is actually really good, in a strong contrast to the last game's stupid, stupid Joker on Super Steroids fight. 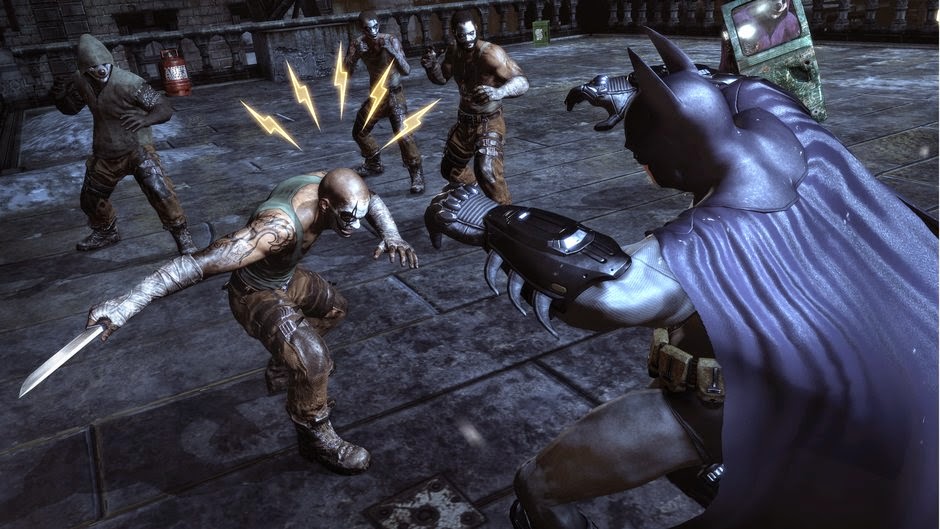 Players are free to glide around and grapple from building to building, seeking out villains to punch (there's a large number of super villains lurking around that aren't part of the main story, Mad Hatter's trippy nightmare mission being the game's best), people to rescue, and doodads to collect. When you're done with the open world, there's a ridiculous number of challenge rooms to play around with too. This game is absolutely loaded with content, so if you enjoy its combat and puzzles you won't get bored any time soon. For me, the combat was fun but became too repetitive by the time I was done with the main story. Like the Assassin's Creed games, I had to pace myself to not completely burn out on the game's open world elements and repetitive fighting.

I don't have a lot to say about the game play that wasn't already addressed in the previous game's review, as not a lot has changed. If you want more on that, check out the Arkham Asylum review linked above. My only real game play criticism, aside from the combat becoming repetitive, is that there are a couple of horrendous flying challenges in the game's Ra's al Ghul stage that look cool but are awful to play. Mostly, I want to talk about this game's mess of a story. 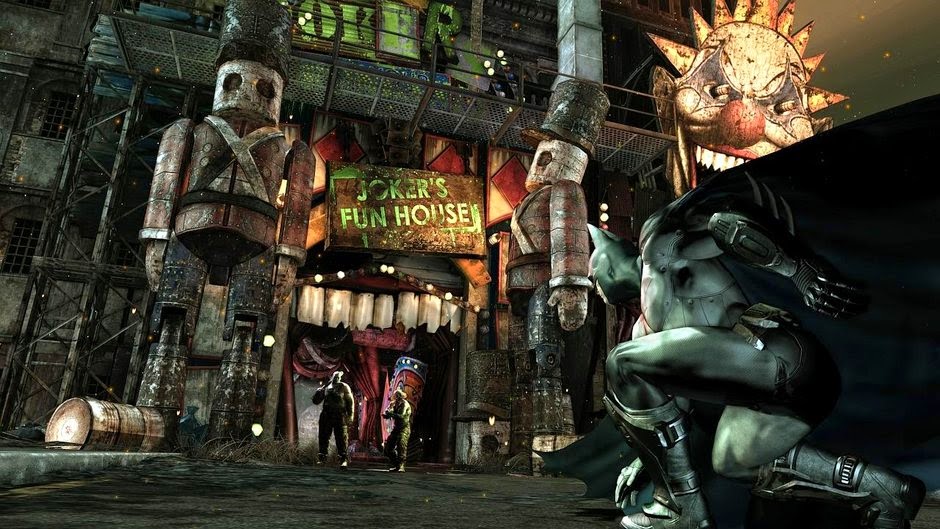 Spoilers below, ranging from mild to major.

Batman: The Animated Series and comic writer Paul Dini returns as lead writer, this time working with Paul Crocker and Sefton Hill. Like the first game, this Batman title has no idea if it wants to be follow the tone of The Animated Series (many of the cartoon's actors reprise their roles here) or the darker Alan Moore / Frank Miller versions of the character and misfires in both directions. The game's attempts at Mature Content are exclusively embarrassing. After saving a room full of doctors and cops, players get to hear a detailed story about a doctor cutting his own face off for no reason aside from adding grimness. When playing as Catwoman, enemy characters yell at the player about how they can't wait to rip her clothes off. When playing as Batman, enemy characters talk among themselves about how women in town better be careful, these guys haven't been with a woman in years. When you take on The Penguins goons, you get to hear them talk about how they're going to "have fun" with Harley Quinn before beheading her. They also like talking about how gross and weird it would be if Harley had been born a man and had a sex change. Batman has no reaction to any of this; Catwoman gets a couple of sassy quips.

I'm not saying a video game can't cover brutal topics, or else I wouldn't be a huge fan of Silent Hill 2 or Spec Ops: The Line. I'm saying Dini, Crocker and Hill wrote these topics in the stupidest way possible, resulting in a game where enemy dialogue exists to basically yell "I'M EVIL" at the player so they can feel good about beating them senseless. Incidental dialogue between enemies and NPCs can go a long way to adding flavor to a world, but having guys sit around essentially saying "Boy I can't wait to rape someone" isn't the way to do it. It's like having a shooter set in the Middle East where enemies rush the player screaming about how much they hate freedom, which I can't imagine existing outside of satire. 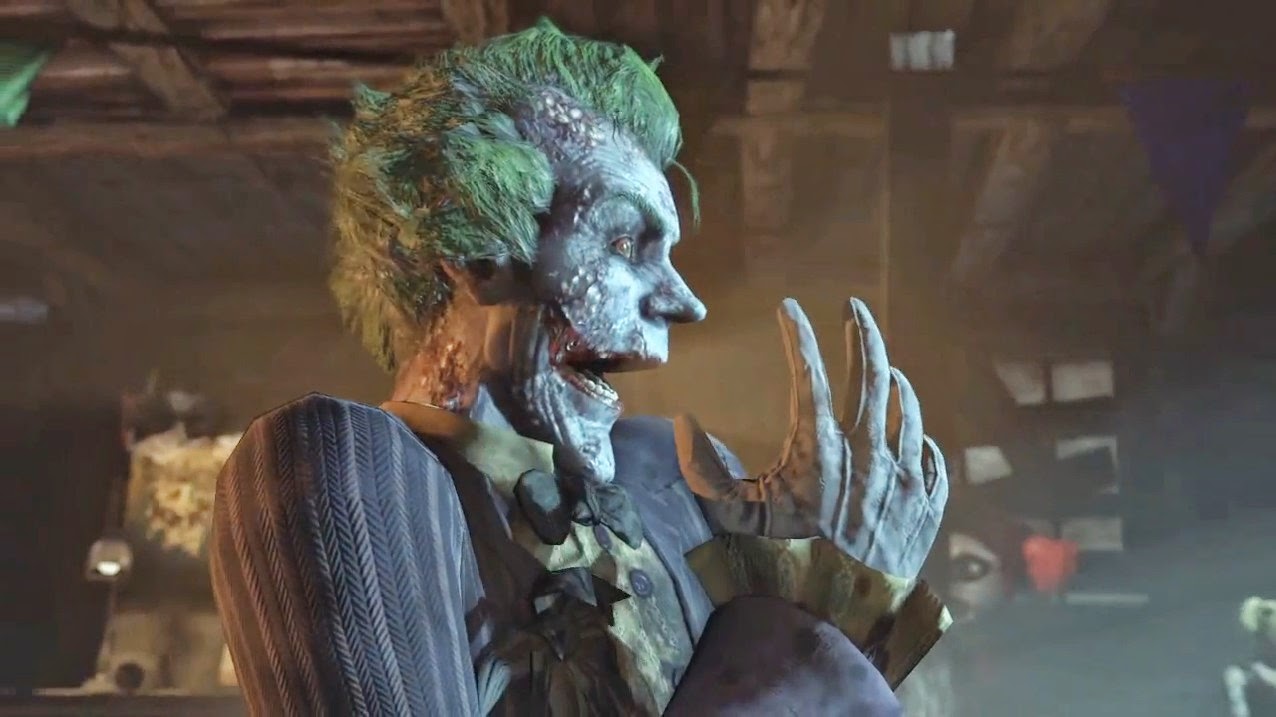 The dumb writing extends beyond the gross examples above. Arkham City's entire setting is based on a pretty shaky foundation that only gets worse as the game goes along, and it features two main storylines that never intersect in any meaningful way. After the Joker causes mayhem at Arkham Asylum in the previous game, there's a political movement spearheaded by deranged doctor Hugo Strange to move the city's patients, convicts, and anyone Strange disagrees with into a new super prison comprised of a massive chunk of Gotham's downtown area.

For some reason, the people running Gotham are fine with erecting giant walls around major parts of their city and kicking out the citizens of those areas so that the region can serve as a cell-free holding area for thousands of criminals, guarded only by a wall and a dozen or so cops. The idea of creating a ghetto district for undesirables is not a new idea in reality or in fiction, but it's pretty hard to buy anyone saying, "Yes, I'm fine with demolishing a major part of the city's financial and commercial district and placing all of these super-powered gang leaders here essentially unguarded, nothing could go wrong." Bruce Wayne opposes the creation of Arkham City and is tackled and thrown inside by Strange's guards, because having a giant prison in the middle of town also means abolishing any kind of judicial system.

Once inside, Bruce gets his Batman gear via airdrop and becomes entwined in two stories. In one, Hugo Strange is counting down to Protocol Ten, through which he's authorized to gun down every person in Arkham City without trial or oversight after a certain number of hours have passed. If the police and politicians are fine with this happening (Commissioner Gordon offers a half-hearted protest), Strange probably should have just executed everyone in regular prisons two years ago instead of investing millions of dollars and years of work into constructing this warzone. In the other story, the Joker is dying of a mysterious illness that he quickly spreads to Batman. Batman searches for a cure, with Joker taunting him about how they've both got about a day to live. These two stories occur simultaneously, but are so disconnected that they might as well have been two separate games. 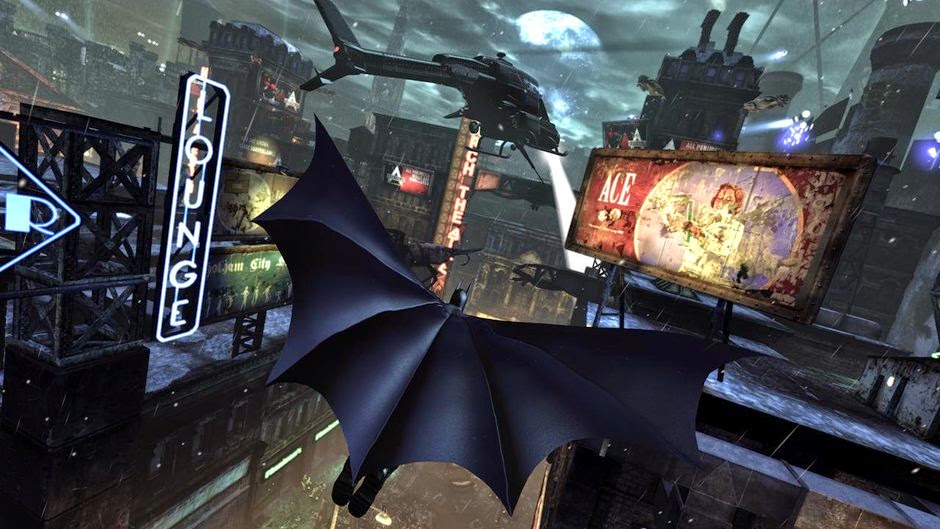 Batman is simultaneously a great detective and a complete chump here. He gets fooled too easily and too often, and plays along with Joker's plan far too easily. Examining whether Batman is ultimately a force that does more bad than good is a popular one in comics and movies, and is a central theme in Nolan's Dark Knight Trilogy. Here, we're given a Batman whose morals never seem to be in a sensible place. When Protocol Ten activates and Strange begins gunning down the people of Arkham City, Batman's plan is to ignore it and chase after the Joker, who has taken Talia al Ghul hostage off screen. Batman's support crew, Alfred and Oracle, remotely disable some of his gear and force him to deal with Strange's massacre instead. We're told that Batman is torn apart by his love for Talia, but none of their scenes together do anything to sell this. In fact, their main scene in this game is Batman using her and lying to her in order to steal her dad's blood in order to synthesize a cure for Joker's Syndrome. It's a moment of Moral Conflict that is completely unearned. At the end, Talia is killed, and Batman gets angry for a little while but doesn't really seem to care. He's more shaken up by the Joker's death, which is the one genuinely effective moment of shock in the story. Absolutely nothing sold me on her being someone that Batman would sacrifice the city to save.

I'm really bothered by Harley Quinn's use in this game. Her love for the Joker, whether genuine or a result of years of abuse and conditioning, has trapped her in the role of caretaker as he withers away with his disease. This works, and her motivations are believable. She's an interesting character that's more genuine here than in the previous game. The problem is that the game's incidental villains just won't stop reminding us of how badly they want to rape and/or kill her, or if they're some of the nicer inmates, simply remind us of what a "psychotic bitch" she is for the fiftieth time. When Batman eventually finds her tied to a pole and gagged, players can ungag her and ask her for information, which she willingly and helpfully gives with no ulterior plan. Instead of untying her or saying anything else, the player is given a button prompt to regag her.

Batman stops Strange's massacre but does nothing to affect the status quo. Arkham City is still standing, Gotham's politicians still allowed prisoners to be mass executed, and Harley is still tied to a pole in a city full of people that we're told can't wait to abuse her. I don't think Rocksteady's intention was to paint Batman as a failure here, but I can't see him as anything else. Stopping Strange should be act one; act two should be ripping apart the fascist system that allowed Arkham City to happen in the first place. We see at the beginning that Bruce Wayne is against the Arkham City system, but he does nothing to stop it outside of giving a weak speech and punching out its warden once he puts on the Bat Suit. The social contract that allowed the birth and the events of Arkham City to unfold ins left intact, merely with one of its major cogs removed. Batman is a hero of the elite, preserving the status quo while eliminating one of their more dangerous members. Nothing he does really aids the plight of the people. I wasn't expecting a full on communist revelation in which Batman throws off the shackles of Arkham City and takes the fight to the bourgeoisie that allowed it to happen, but I was expecting a little something more than a punch and a shrug in the face of fascism. 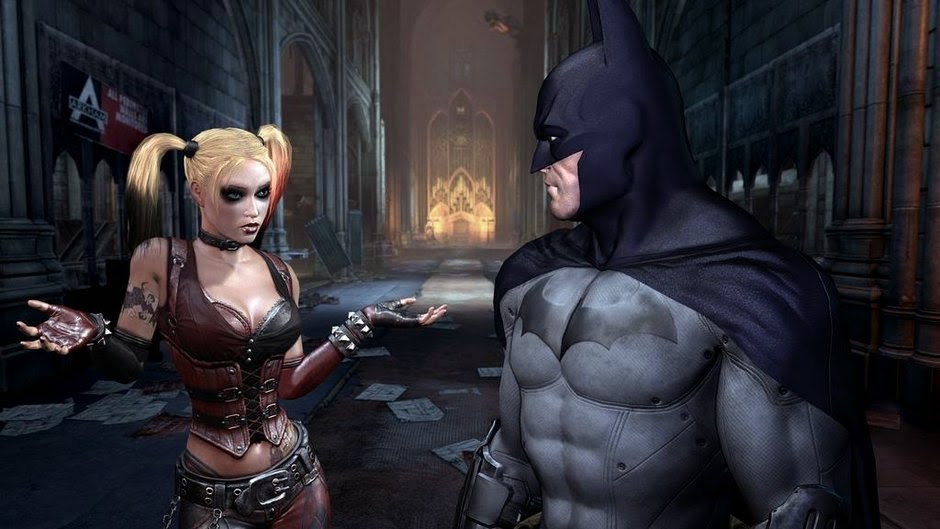 As a game, Arkham City is more well made and more fun to play than most superhero games, and is an improvement on its predecessor. As a story, it's a mess that can't pick a tone, can't settle on a story line, and has a lot of really gross imagery without earning it. I don't need a good story to enjoy a game, but if you're going to put hours of cutscenes and dialogue into a game, it had better be at least passable. Arkham City's is not, and is a massive step down from the writing of Dini's own Animated Series credits. For this trashy, tonally incoherent mess, Dini, Crocker and Hill were nominated for an award from the Writers Guild of America and won an award for Best Video Game Writing from the Writers' Guild of Great Britain.
Posted by surlaw at 8:35 PM