Featuring some incredibly nice hand drawn art, Ubisoft's Child of Light is a turn-based RPG with light platforming elements and an emphasis on interrupting enemies with properly timed attacks. It's the third game to run on the Ubi-Art Framework engine, an engine created for 2011's Rayman Origins and refined in 2013's Rayman Legends. This engine's focus on high quality artwork serves Child of Light well, with its painted graphics playing a big part in bringing its fairytale world to life.

Ubisoft deserves a lot of credit here; while they're notorious for putting out yearly sequels to their biggest titles (I enjoy the Assassin's Creed series but there's no question that they're pumped out nonstop and would all benefit from longer development cycles) they've recently put a lot of time into the creation of smaller, low cost digital titles. From Far Cry 3's gaudy neon standalone spinoff/DLC Blood Dragon to Call of Juarez: Gunslinger to Child of Light and to the newly released adventure game Valiant Hearts: The Great War, Ubisoft's more experimental approach to style and pricing has been a welcome change for the company. 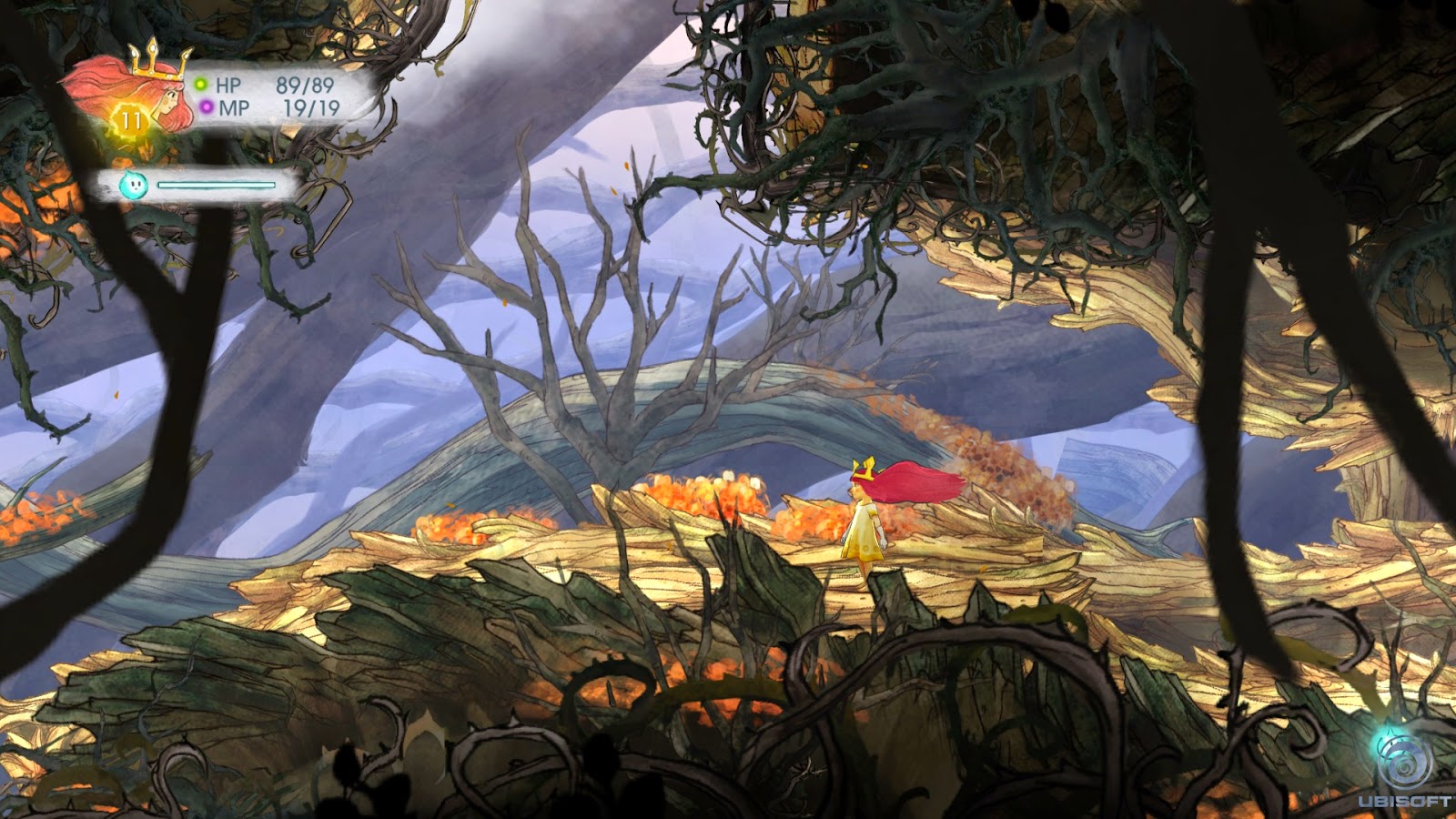 Child of Light is framed as a fairytale bedtime story and focuses on a younger audience than today's RPGs typically do but without pulling punches and without talking down to its audience. There's no questioning that this is a children's story, but unlike, say, Pokemon X/Y, the game doesn't think its audience is brainless. Its writing isn't on the same level, but Child of Light's approach is very much styled after the feel of a Disney animated film. There's a focus on growing up, learning who you are, and dealing with feelings of loneliness, betrayal, and loss in a way that, while aimed at children, tells its story with better emotional cues than many games aimed at adult audiences. Each character is written with a unique voice, something many RPGs fail at, and its dialogue is told through an ever present rhyme scheme that may annoy some players but fits the tone of the story and world here perfectly. 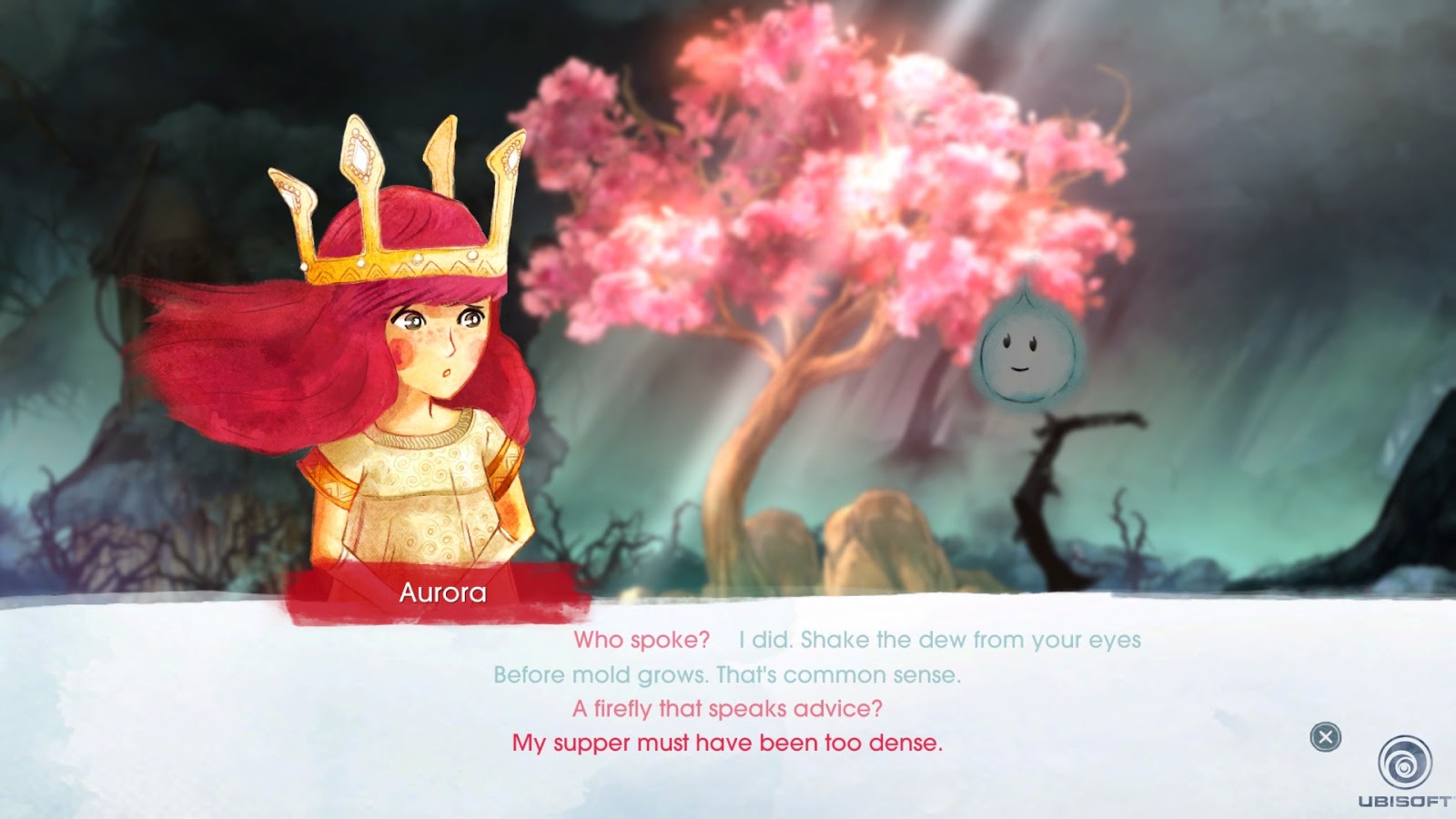 The story's star is Aurora, a young Austrian princess living in the late 19th century who falls ill and passes into a fantasy world. Her name comes from Disney's 1959 adaptation of Sleeping Beauty, and like the Aurora of that film, Child of Light's heroine falls into a deep, deathlike sleep. Whether the story that follows is real, a fever dream, or a fantasy before death is left largely up to the player, and all are fine interpretations. Through her voyage, Aurora befriends a firefly/spirit known as Igniculus, as well as a posse of clowns, monsters, and other outcasts while learning how to wield a giant sword and cast light-based magic.

Aurora is one of the stronger lead characters in a recent, mainstream release. When it comes to her friends, she's strong and kind, in spite of her childish tendencies surfacing regularly. She makes her own choices, and they're not always the right ones; she can be selfish and bratty, as any ten year old is going to be. This isn't a game about a flawless hero, but rather, a scared, lost child who finds the inner strength and confidence that allows her to pass through the often desolate world of Lemuria and banish the demons that plague her. It's at once both a metaphor for growing up and for coming to terms with death. 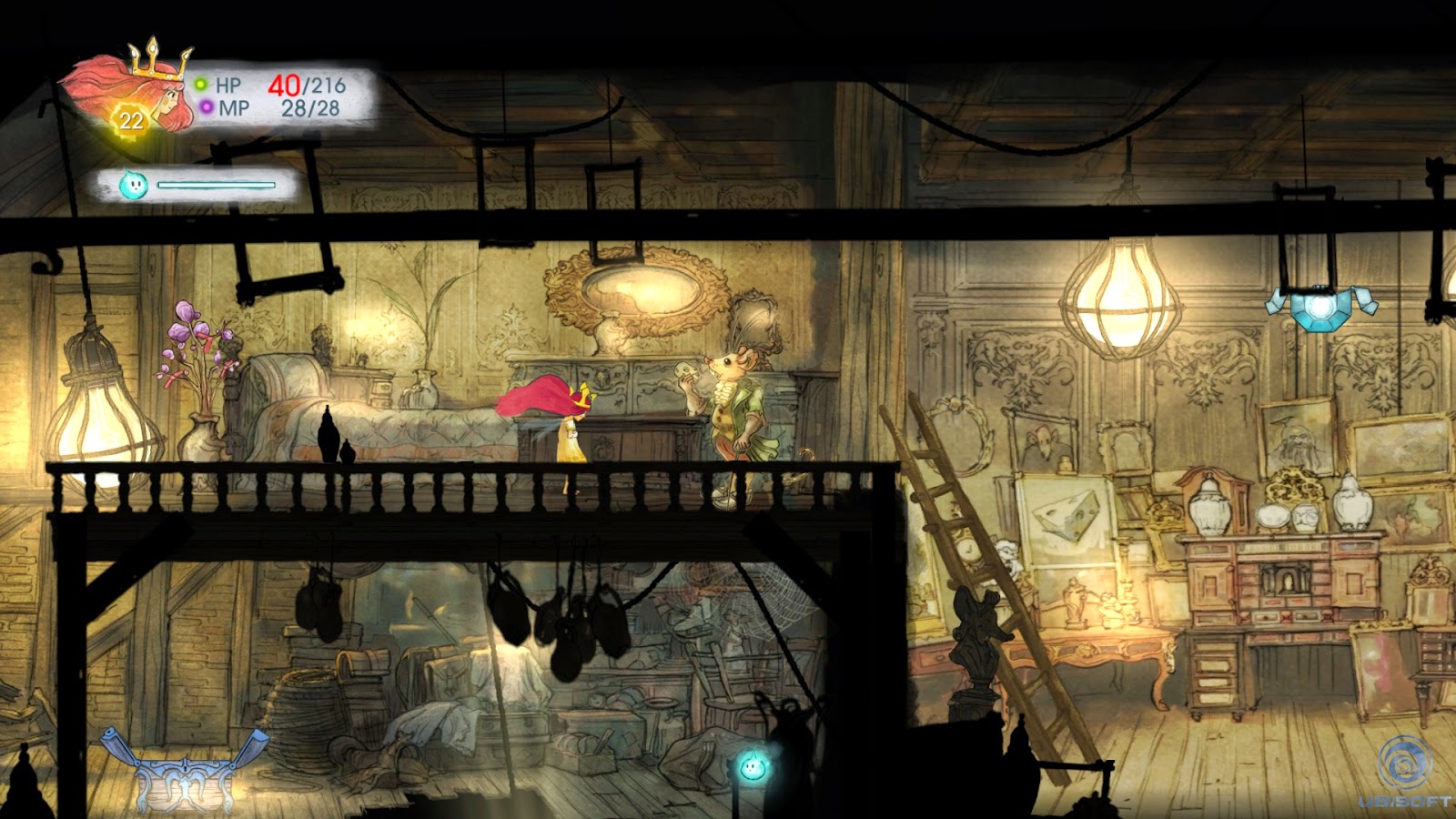 Accompanying the game's wonderful artwork is a soundtrack by Montreal singer/songwriter Coeur de Pirate. The game's orchestral work is a distinct shift from Coeur's usual pop/folk style, and an impressive one; it's got one of the more memorable soundtracks I've heard in recent days. I've been a fan of hers for a couple of years now and saw her put on a good show about a year ago at the Paradise in Boston. I was interested in Child of Light from the first screenshots, but hearing her work on the soundtrack pushed me into picking it up day one.

Child of Light's gameplay ranges from extremely simple to decently challenging depending on your difficulty level. The game's default difficulty is very simple, and enemies aren't much of a threat. This is good for players who just want to enjoy the world, or who are new to turn-based battle systems. More experienced players should select the game's hard mode, in which it's actually pretty easy to die during minor battles. The game isn't very punishing on Game Overs, so losing to a boss a couple of times to figure out a strategy is never frustrating. 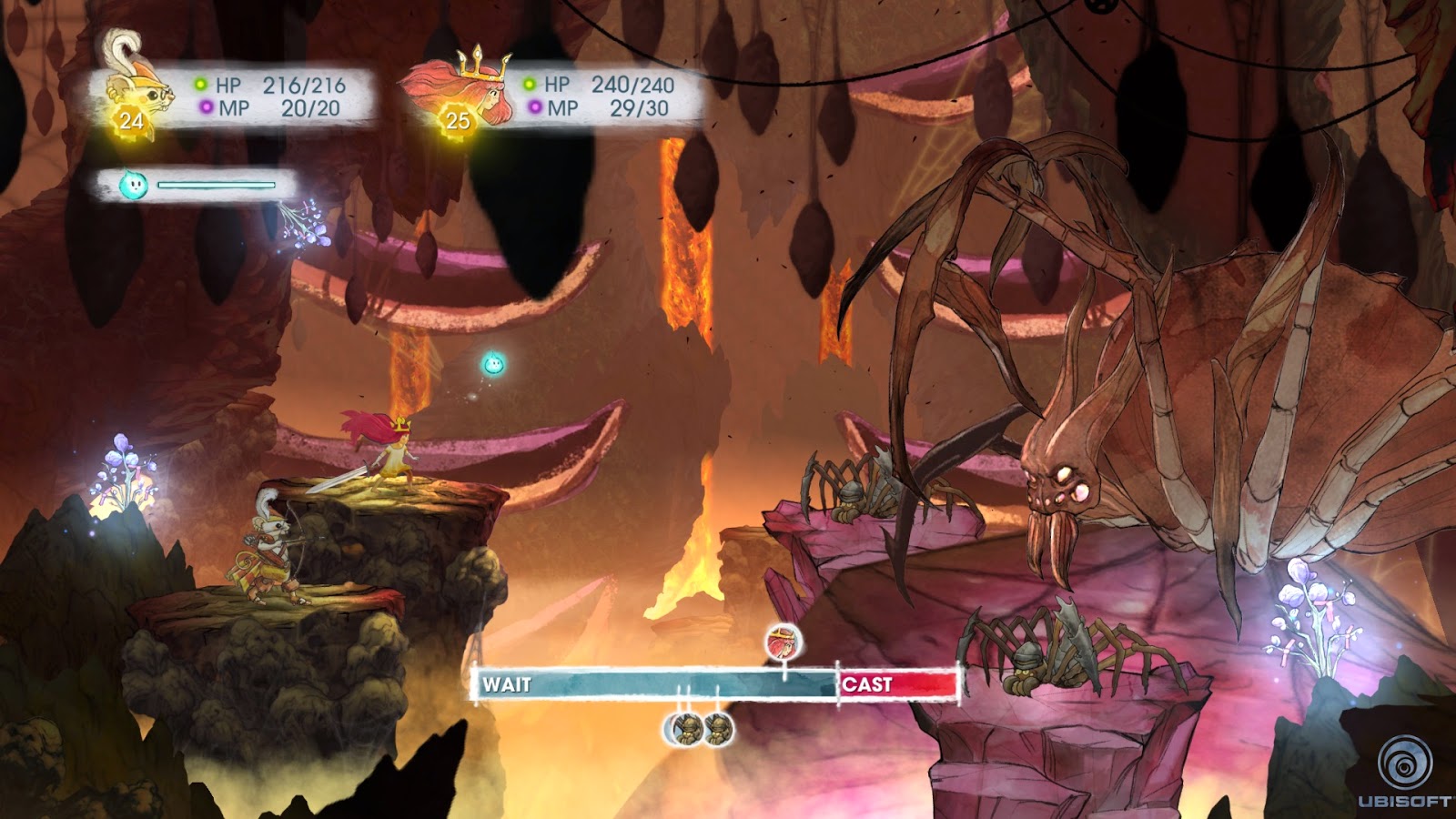 Only two characters participate in battle, but can be swapped out freely with the rest of the party, much like Final Fantasy X. The game's ability tree also plays out similarly to a simplified version of FFX's Sphere Grid. Gameplay flows much like the Grandia series, where players can interrupt, delay, and cancel enemy attacks depending on careful timing. I was never a huge Grandia fan, but Child of Light plays extremely well with this system. Using the PS4 touchpad, players can also move Aurora's firefly companion around the screen, placing him on top of heroes to regenerate health or on enemies to slow their attack gauge. This adds an active, sometimes frantic element to battle, and works very well with the controller's touch interface. Presumably, it also works well on the Wii U version's tablet or on the PC version using a mouse. 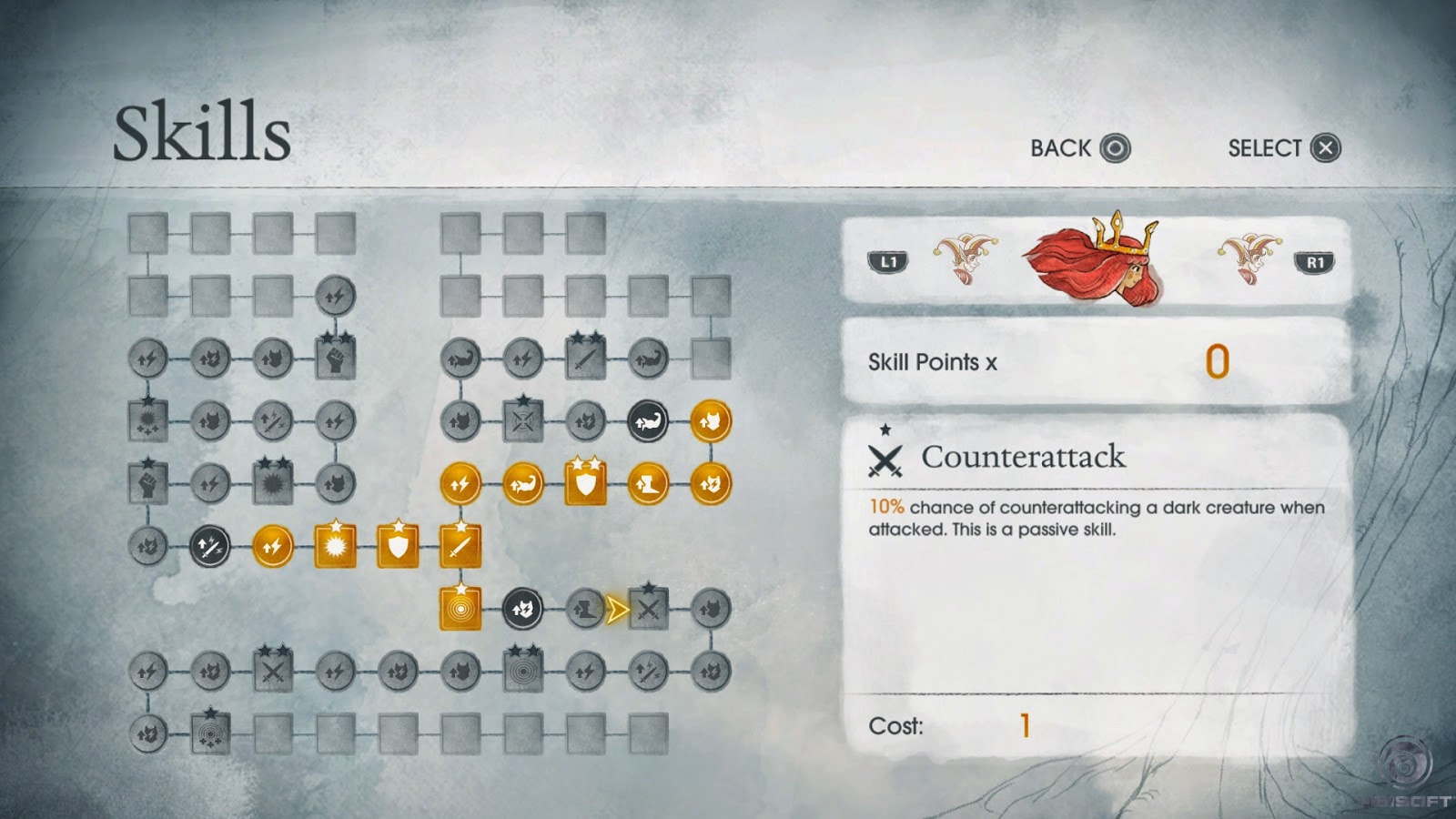 The game's platforming is its only weak element, since it's largely ignored after the first area. Players quickly gain the ability to fly, negating many potential platforming puzzles, but you can still take some serious damage if you fly carelessly into hazard areas. If you take your time, though, there's no real threat there. 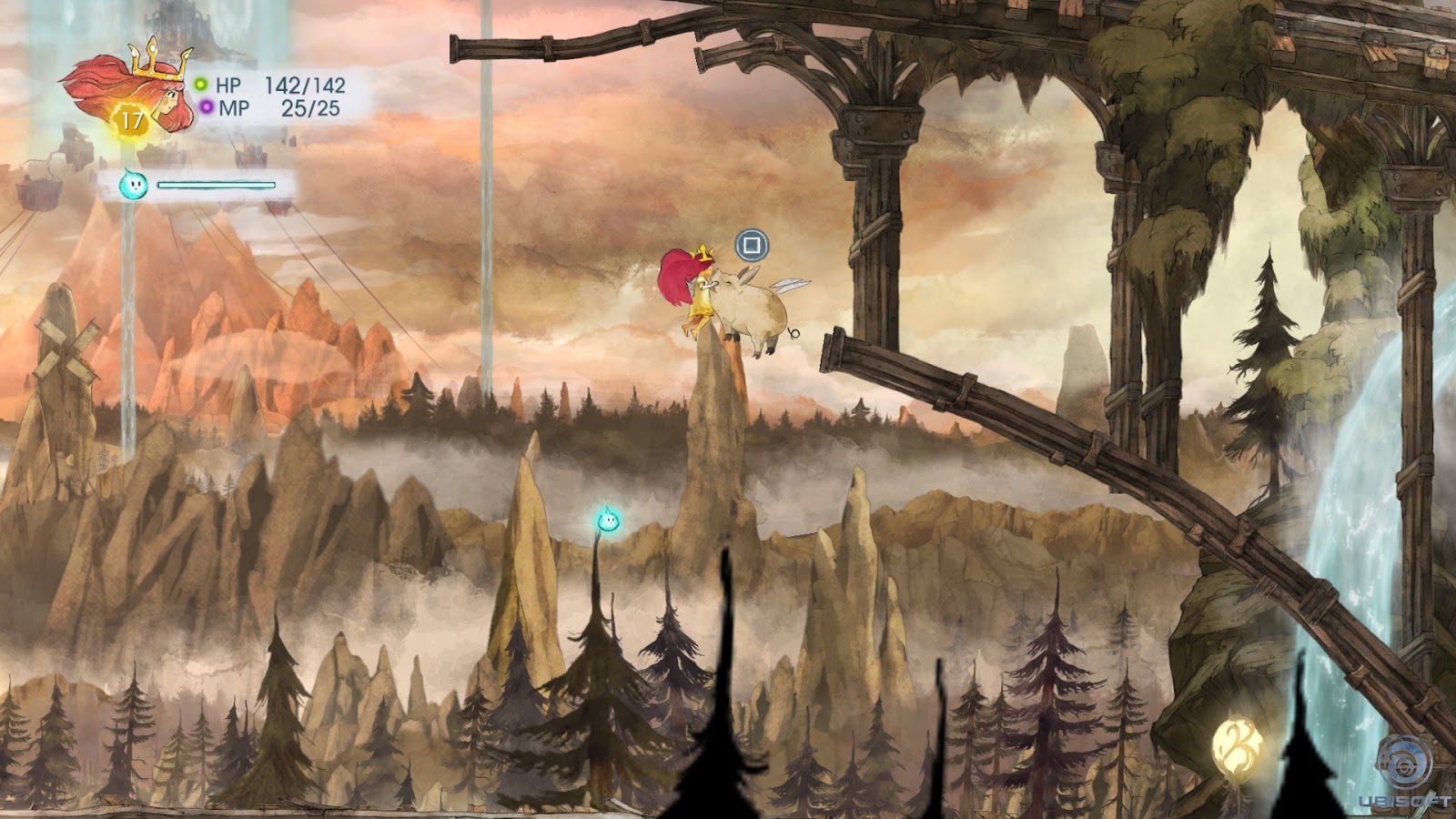 I really love what Ubisoft did with this game and I look forward to checking out Valiant Hearts. So far, Child of Light is one of my favorite titles this year, from its entertaining battle system to its art to its unconventional (in the video game world) approach to story. It's an extremely earnest game that knows exactly what it is and does what it sets out to do well, in a smaller, more personal way than RPGs tend to do. The story never derails, and never betrays its tone. Child of Light is a careful, well-crafted game from start to finish, and the team at Ubisoft Montreal deserves big praise for how everything turned out.
Posted by surlaw at 7:22 PM