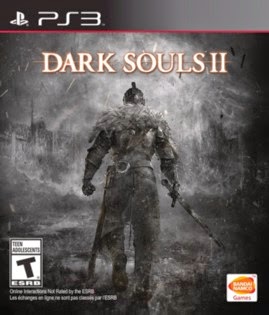 Dark Souls II is the third game in From Software's Souls series, following 2009's Demon's Souls and 2011's Dark Souls. The series has a reputation for being ridiculously difficult and unforgiving, when in reality it's a challenging but extremely fair series of games that rarely uses cheap tricks (and the ones it does use rarely happen more than once) and rewards slow, careful play. I love these games; I picked up Demon's Souls shortly after release and played through it several times in a row, and did the same with Dark Souls two years later. This is the finest series of games to premier in this console generation, and their meticulous design is unmatched. Dark Souls II had a lot to live up to.

Demon's Souls is a personal favorite of mine, but when I picked up the first Dark Souls I thought, "this is an improvement in every way," and I stand by that. Demon's is phenomenal, but Dark's intertwined world, expanded cast of interesting but evasive NPCs, and greater combat options won me over. Both games have fantastic boss battles, but Dark had the better stage design in my view. A year later, From would release Artorias of the Abyss, a downloadable expansion for the PS3 and Xbox 360 that was natively bundled with the PC release. This DLC offered improved (while still obtuse) storytelling, my favorite boss fights of the series, and some really gorgeous new areas. With each bit of Souls content being better than the last, and with a very enjoyable beta test that I took part in months before release, I had no worries about Dark Souls II being a good game.

Without a doubt, Dark Souls II is a fantastic game. The exploration and combat is still methodical, dangerous, and wonderfully rewarding. The world surrounding it is still mired in misery. The NPCs are still pretty funny. It doesn't do a whole lot new on the surface, but there's really nothing wrong with that. Demon's and DS1 are so good that I'm perfectly happy with just having more content. The only problem is that the new content just doesn't feel as inspired as the previous games or the Artorias DLC. 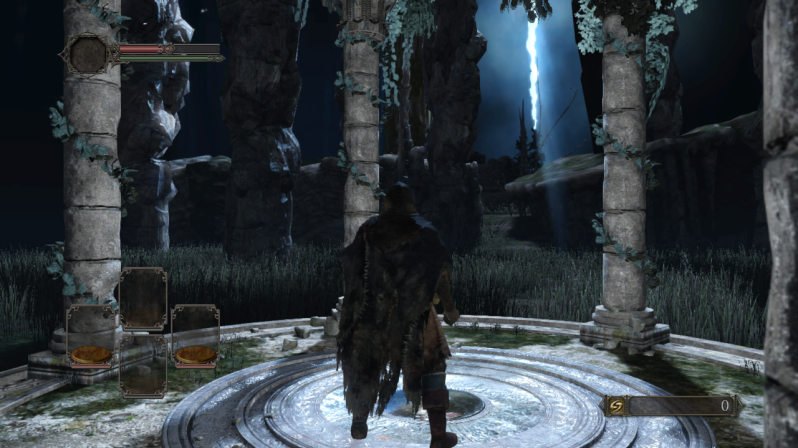 The world of Dark Souls II feels like a hybrid of the worlds found in Demon's and Dark 1. Demon's Souls featured a hub area which connected all the game's zones, inhabited by NPCs who provided scraps of hints as to what was going on in the world. Dark Souls 1 featured a larger world made of many interconnected zones that played could travel between and open short cuts back and forth, giving the game's world a much more organic feel. DS2's world centers around Majula, a safe hub area full of mostly friendly NPCs where players can venture down any of the game's four major branches pretty early on. These areas don't intersect, and are pretty linear in terms of progression. It's not as literal as going up to a portal and selecting your world in Demon's Souls, but it's not nearly as free or open as Dark 1, and as a result the world feels less coherent. You can fast travel from zone to zone immediately once you find your first bonfires to rest at, so there's never a reason to learn all the ins and outs of an area. For the most part, once you finish off a boss, you're not going to return to that area.

Most of the stages in Dark Souls II are well designed, though there are a few I'd prefer to skip (The Gutters is an easy, but extensive, romp in the dark that doesn't even have a boss, Sinner's Rise is barely a stage at all.) The game's frame rate is solid throughout, so there's nothing like the obnoxious drops in Dark 1's Blight Town. The biggest problem with the stages here are that there are way too many areas that are just long hallways with gauntlets of 6-8 enemies in a line, which is rarely difficult since they can be fought one at a time but is always time consuming, and that there are too many forgettable bosses.

More isn't always better; this game boasts 32 bosses, including optional ones, but a huge number of them are just big guys with swords and shields that you beat by sticking close and strafing around. Some of the most interesting bosses in the game are entirely optional, and offer little reward for beating, and the size of the bosses is generally a lot smaller. Dark Souls 1 only had 22 bosses (not counting the ones added in Artorias of the Abyss), but for the most part they're all very memorable, even the laughably easy ones. Demon's only had 16 real bosses, but I remember each one clearly, even the ones I didn't like. I found myself forgetting about some of DS2's bosses shortly after beating them. Granted, the ones that are good (Old Iron King, Skeleton Lords, and the Chariot are among my favorite) are wonderful, but there's too much filler. 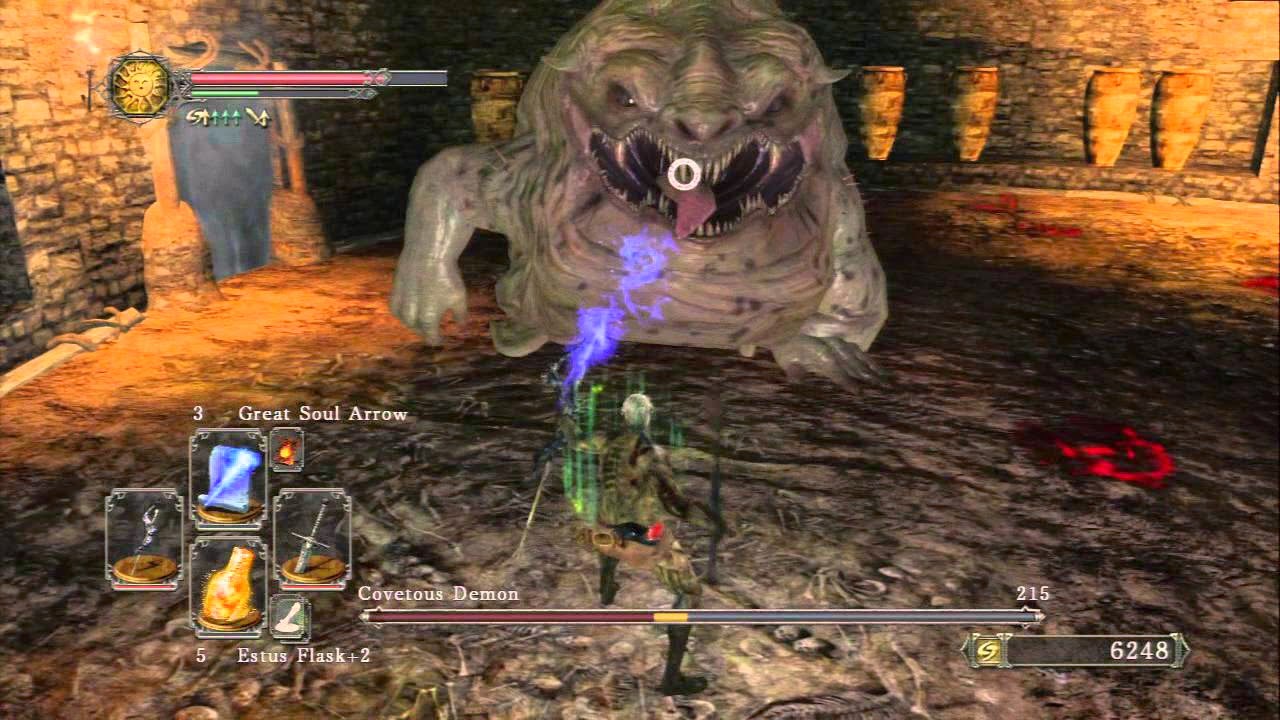 It's easy to nitpick Dark Souls II for not being what I expected, but there are still a lot of little design choices that just irk me. I hate having to travel back to the hub world to level up (this was the case in Demon's as well, DS1 streamlined it and let you level at any resting point.) Weapon upgrading is far faster and easier but massively reduces the importance of elemental weapons, which no longer have their own upgrade paths. The character designer is just as terrible as it was in the last game (but with even worse color sliders somehow.) There's no manual, either digital or physical, so you have to figure out basics like how to light torches on your own (press triangle while standing at a bonfire.) The window for parrying enemy attacks is far less forgiving, and it wasn't very wide in the previous games anyway. There's one puzzle involving burning an object using a torch that I don't know how anyone would figure out without another player helping, since there's literally no other puzzle anything at all like it in the rest of the game. I'm not one to call for games to be gorier, but this one's weirdly bloodless and its undeads are cartoonier than before.

The inventory screen in the last game showed too few items at once, the new one shows too many to the point of being hard to sort through. There's no way to see how a weapons will affect your stats until you've bought it. Dying and becoming a hollow reduces your overall HP with each death, which does more to punish players who aren't doing well than it does to reward those who are. Restoring your total HP and becoming human again can be done by using rare consumables, assisting other players with boss fights (sometimes; there's no rhyme or reason I can see for when I do or do not restore human form after assisting), or wearing a Ring of Life Protection throughout the entire game and just repairing it when it breaks (which is cheap and easy but wastes your time since you can't repair broken items without warping back to the home hub.) You can now be invaded while hollow, which kind of ruins the risk/reward system of being human in the previous two games. On the other hand, almost no one ever invades this time around. 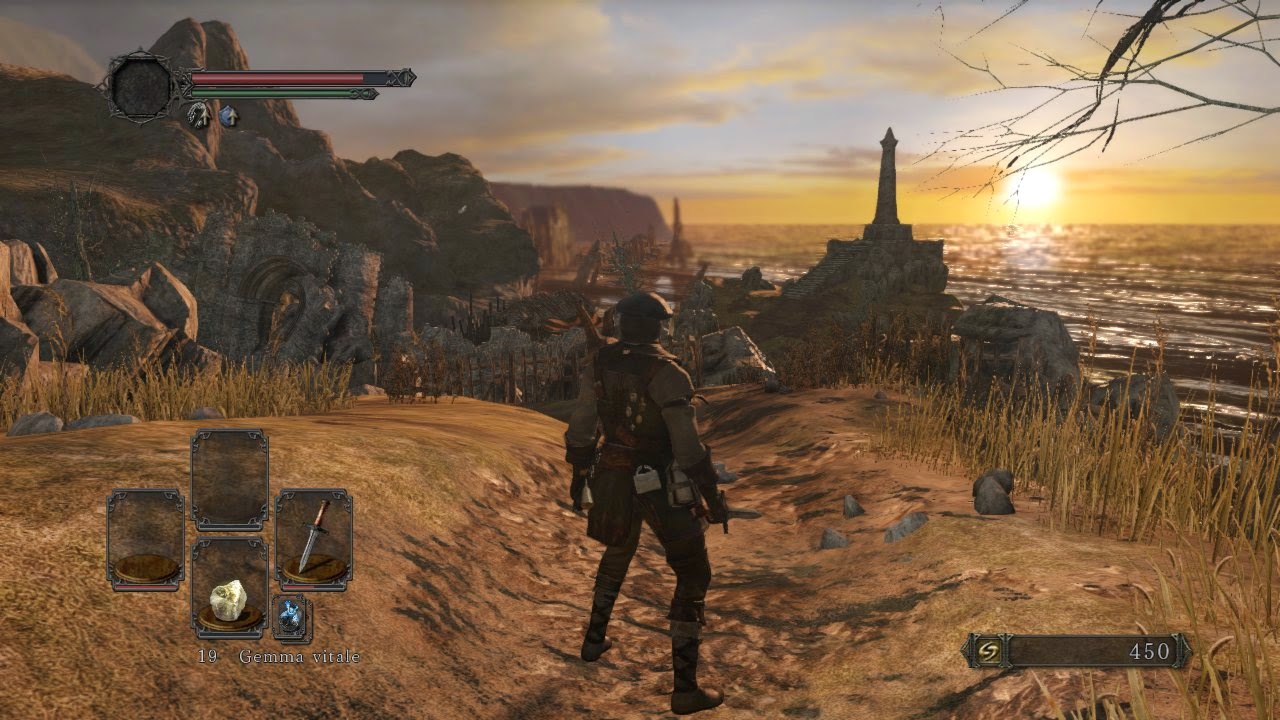 As to balance issues, certain spells feel massively overpowered (Soul Geyser and Forbidden Sun deal silly huge amounts of damage), strength based weapons feel good, dexterity based weapons feel much worse than they did in the last game, and it's much harder for a physical fighter to rely on pyromancy this time around. The Curse status effect, which ruined many people's days in the last game by being extremely expensive and obnoxious to cure, is now nearly harmless with how easy it is to dispel. Bleed effects are barely noticeable. On the opposite end, Poison is now grossly overpowered. It's easy to get and give Poison status, and your HP drains ridiculously fast. It's not as bad later in the game, but early on you're pretty much dead if you don't immediately treat the poison. This doesn't just apply to players; enemies afflicted with Poison can die before they even get a chance to turn around, and some bosses can be lose half their life bar to it in a matter of seconds. If you've played DS1, it's much more like the Toxic status effect was there, except now it's everywhere and you can easily stick it on enemies too.

One of the interesting issues the game has is its lighting. Players can light torches throughout the world, and originally, this was meant to be an essential part of gameplay. In this trailer from Tokyo Game Show in 2013 and in the beta I participated in, some areas are almost completely dark aside from the player's torch and they looked great. In the final game, the brightness has been turned up enough that these same areas look flat and washed out. There are only one or two points in the whole game where you'll want to keep a torch out, so at this point the whole torch system is pretty much ignorable. I'm fine with that change in theory, but From designed some of these areas to be dark, and the new brighter settings just make everything in them look worse. However, the areas which were always meant to be bright and colorful look wonderful. 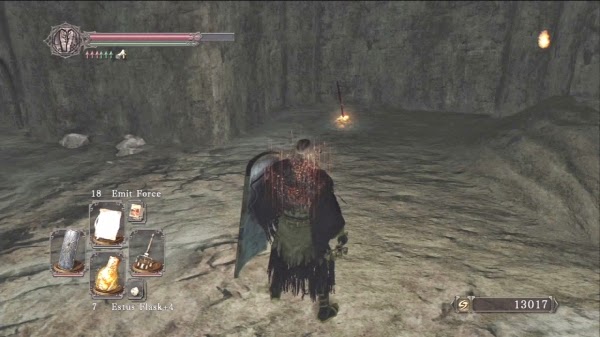 I don't want to come off overly negative, because I really think this is a great game, just one that's notably weaker than its predecessor. I'd put its stage design above Demon's Souls and above some of the later parts of Dark Souls 1, but its bosses below both games'. The new Hex spells, which drain HP when used, are a lot of fun to use. The music is still great and haunting, even if there's less of it. There are some great NPCs here, especially the talking cat and rat you encounter, but your main quest giver, the Emerald Herald, is nowhere near as interesting or funny as Demon's Maiden in Black or Dark 1's Frampt. Covenants are far easier to join and understand, but some of their requirements are ridiculous (Invading and defeating 500 players is not a reasonable goal, nor is defeating 500 invaders while summoned into someone else's game) but their rewards can be purchased cheaply in subsequent play throughs. Leaving and rating message for other players is far more streamlined now and can be done from your main menu instead of requiring an item, and I found myself summoning helpers and being summoned far more frequently than in the previous games. 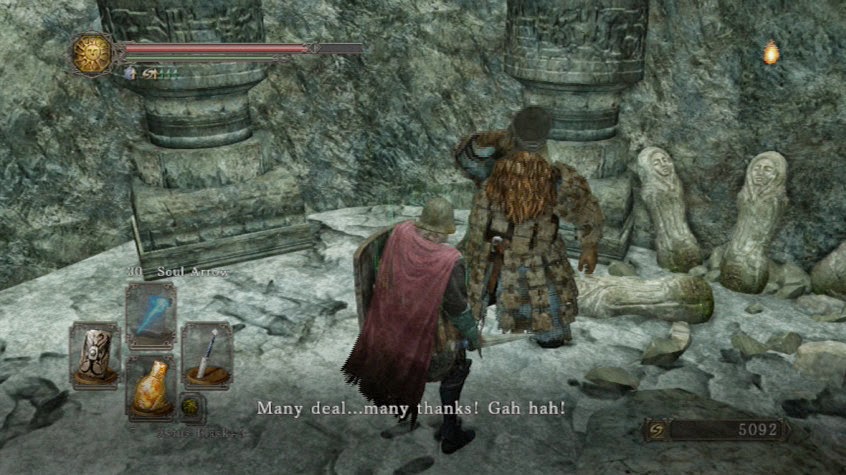 Ultimately, Dark Souls II is more of the same, and still great but not as great. I'm only picking at it so hard because I genuinely think the previous game was close to perfect, a few bad areas aside. It's absolutely worth playing for fans of the series, but I'd recommend Dark Souls 1 to new players first. The game here is still phenomenal, even if the world's not nearly as engrossing. I liked it enough to run through it two and a half times (New Game + adds new enemies this time around, in addition to boosting difficulty) and get 100% on my file, but I don't see myself coming back to it once a year or more like I did with the other games.
Posted by surlaw at 11:25 PM