Chibi-Robo Photo Finder is a budget-priced 3DS eShop game and the fourth installment of Nintendo's Chibi-Robo series. As in the other games, Photo Finder stars a tiny household robot who cleans up junk, collects objects, and works, often thanklessly, to make people happy. The original 2006 game is one of my favorite Gamecube titles, but neither its 2007 DS sequel Park Patrol nor this new game recaptures that magic. The saddest thing is that the second DS game, released in 2009, was the closest in spirit to the original title, but never got released outside of Japan. 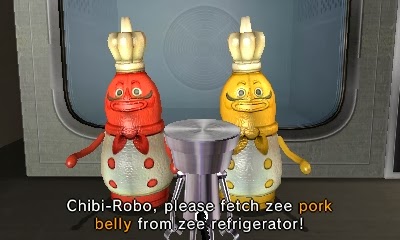 At its core, the Chibi-Robo series focuses on mundane busywork. Cleaning up dirt, picking up trash, and finding lost objects make up a good deal of the gameplay of each title. What makes this work in the original game is its huge environment, funny side characters, and genuinely well written plot. The first Chibi-Robo title plops the titular robot into a household on the verge of collapse, with a husband and wife drifting apart and an adorable but despondent daughter who withdraws from the world to avoid the pain of the impending divorce. It's a remarkably human story surrounded by weird cartoon monsters, and it's a shame that Park Patrol and especially Photo Finder would so thoroughly abandon this tone.

Park Patrol shifts from helping an emotionally damaged household get back on its feet to helping a run down park get back in shape. Wonderful little blob monsters known as Smoglings run around barfing up pollution and causing general mayhem. It's a smaller, less exciting game, but it's still entertaining enough. Photo Finder, in spite of being on a more powerful system, shrinks the world even further, to a ridiculous degree, while completely abandoning any pretense of the player doing something important. 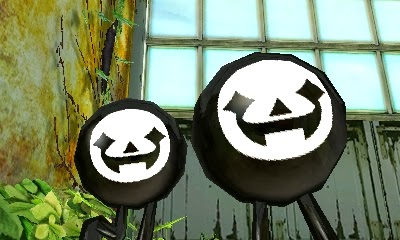 The original Chibi-Robo focuses on soothing emotional wounds, Park Patrol focuses on fixing the environment, and Photo Finder focuses on building a museum full of garbage from the past to appeal to nostalgia (Nostaljunk.) There's an obvious disconnect in theme here that bothered me immediately, and it doesn't help that Chibi-Robo's owner in this game is a creepy looking, completely naive museum curator that wants to spread the joy of showing off garbage that he often doesn't understand at all. Mr. Curator reveres for nostalgic products often without understanding what they are of why people cared about them and sums up modern Nintendo a little too well. Thankfully, the rest of the supporting cast is pretty great, and the Smoglings return. 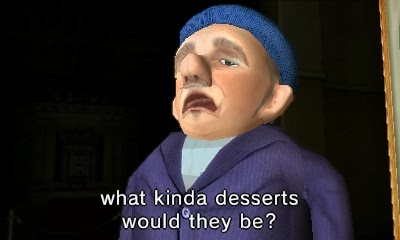 From a pair of living ketchup and mustard bottles to a pop star sponge shaped like a bear to an angry 50's style robot obsessed with precision measuring, Chibi-Robo's buddies in Photo Finder are pretty solid. They're all one-note characters, but they're funny and often hideous in an endearing way. The biggest problem is that dialogue gets repeated often and isn't skippable, so while Chibi-Robo's worrisome buddy Telly isn't horrible on his own, having to listen to him explaining how to save every single time you stop to recharge your robot's batteries (every five-ten minutes) is excruciating. Nintendo has no confidence in the intelligence of its audience when it comes to the game's repetitive text.

I could overlook all of this if the gameplay was good, but it's by a wide margin the worst in the series. As in the other games, Chibi-Robo must stop working and plug into an outlet to recharge his batteries, but in Photo Finder, there's only one outlet and it's not located in any of the areas you can explore. Because of this, your initial work/exploration missions last barely a minute before you need to head home, bookended by an equal amount of dialogue you've already read a dozen times. You eventually unlock better batteries, and by the time you unlock a 150% power battery, you learn that there's almost nothing worth exploring for anyway in these tiny, mostly empty environments. 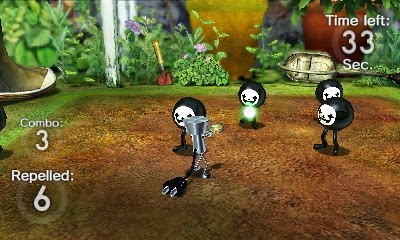 When you're not exploring, you're playing mini games, some of which are basic but fun enough (a simple balloon shooting game using the system's gyroscope to aim) and others that are completely horrible (there are eight boxes, one contains a bomb. Pick the seven that don't!) The purpose of all this is to earn Happy Points which can be used to buy film slides for taking pictures of everyday objects and convert them into Nostaljunk for Mr. Curator's museum. This would be fine if the payout for each job wasn't miserably low; it takes a huge amount of grinding to unlock all of the film slides, and each can only be used once before you have to buy it again. Between the low rewards earned per mission and the horribly low energy level of your character, Photo Finder feels more like a junky free-to-play game designed to suck dollars through microtransactions than a full, balanced game. You can't buy your way through Photo Finder, though. This game's all about grinding. 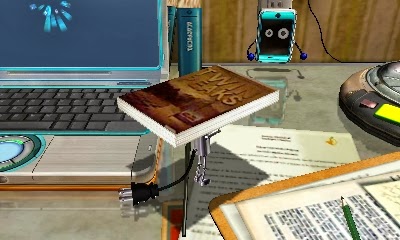 The most unforgivable part of Photo Finder is the fact that its photography system is absolute junk. This isn't really the game's fault, but rather the hardware's; the 3DS's camera is horribly low resolution, blurry, slow, grainy, and barely operates at all in low light. Making a game featuring precision photography on this hardware was a bad idea. It would work fine on any smartphone made in the last five years, but on the 3DS, photography is an exercise in frustration. You fill the museum and progress through the game by taking pictures of real world objects to match in-game silhouettes, but the 3DS  has a very hard time detecting the edges of objects, figuring out depth in spite of using a stereoscopic camera, and adjusting for brightness. you can take a picture that fits the silhouette perfectly and still fail because of the poor hardware, but on the other hand occasionally pass with a high grade even when the object doesn't even come close to lining up. The silhouettes themselves are also often nonsensical; I don't own a t-shirt shaped remotely like the one in this game, and having many of the objects you need to photograph be other Nintendo hardware just feels sleazy. 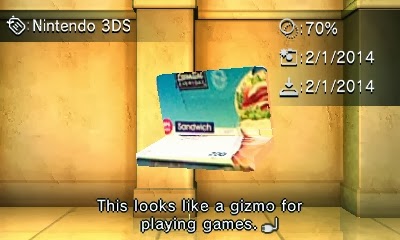 I really want to like it, but in spite of its charming characters, Chibi-Robo Photo Finder is a bad game. Its world is too small, its story too boring, its design too repetitive, and its hardware completely unsuitable. The original was such a unique, ambitious title that it's very sad to see the concept so watered down and broken. I know Nintendo can do better than this, even if the 3DS can't. As it stands, Photo Finder is one of the laziest cash-ins the company has published on this system.
Posted by surlaw at 7:12 PM