Originally released on the PC in September 2013, Outlast is the first title by Red Barrels, a company founded by former staffers from Ubisoft, EA, and Naughty Dog. Outlast is a first-person horror title with a focus on survival in a deadly environment with only your wits, a few places to hide, and a video camera that lets you see in the dark. The game stresses the everyman quality of its hero, reporter Miles Upshur, and gives players no weapons and no means to fight back against the horrors that pursue him through an asylum full of monsters. On paper, Outlast sounds like something I'd absolutely love. In spite of its flaws, Silent Hill: Shattered Memories remains one of my favorite horror games, in large part due to its protagonist actually feeling like a normal, defenseless person with reasonable motivations. I expected something similar from Outlast, and instead found a loud, dumb haunted house that tries way too hard.


I try my best to judge games and movies on what they are rather than what I expect them to be, but it was hard to ignore the hype I'd heard around Outlast. Both critics and audience alike promoted this game as an excellent example of atmospheric horror, so I expected a little more than a four hour series of loud jump scares and splattered gore. Outlast's asylum setting is creepy, well designed, and has some great lighting (through much of the game, your only source of light is your camera's night vision mode, producing an eerie, unsettling effect.) The feeling of being lost alone in the ruins of a facility where people were tortured and mutilated is pretty scary, but Outlast immediately undermines the appeal of its setting by throwing a dozen things that scream in the player's face, more randomly scattered gore than anyone could ever need, and a series of enemies that chase you, easily kill you, and force you to replay long sections of the game over and over. 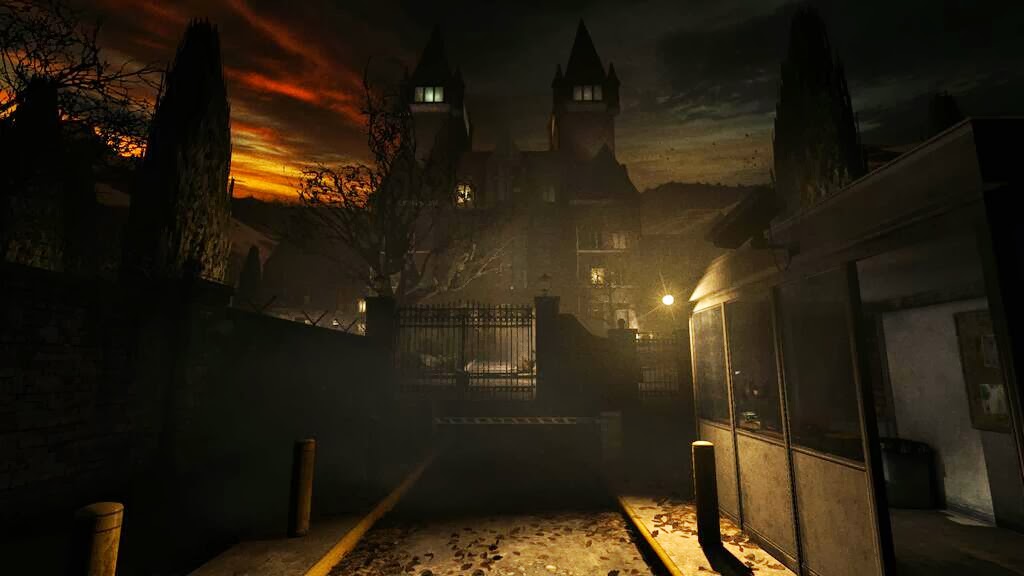 Outlast is at its best when there aren't any enemies around. Creeping through the asylum and finding notes about what happened, punctuated by occasional fluttering movement in the distance, is great stuff. Once an enemy is on to you, though, it becomes a rote exercise in running, jumping over chest-high walls, and hiding under beds until the enemy leaves. You're not going to get through the game without dying a dozen times, but the game has a poor checkpoint system (in the first half, anyway; it gets better about it later on) where you'll die to a scripted encounter after flipping a switch and have to keep redoing the scene until you've learned exactly the right way to get to your next destination. There's almost nothing you can interact with, so there's no way to cleverly evade enemies. Since you have so few options, the game's all about repetition and memorization.

The game's world is extremely linear, with each section of the asylum being fully disconnected from the rest. This can be done effectively, but here it just feels like a method for corralling the player from one scare to the next. No less than three times is Miles knocked unconscious and brought to a new location; the first time it made me jump, the second it made me groan, the third it made me say, "You've got to be kidding me, again?" I've got no beef with on-rails games when they're paced well and the rails aren't this transparent. Having to redo sections over and over again until I learned enemy patterns really killed the game's pacing and atmosphere in a way it wouldn't in, say, a fast paced action game. Having to walk from room to room flipping switches and then running to hide as soon as each switch was flipped quickly became a slog. If you want to design effective enemy stalker situations, you don't have an enemy pop up literally 90% of the time after the player collects a key item or flips a switch. It becomes too predictable too quickly. The loud musical stingers that punctuate each encounter also hurt more than they help. 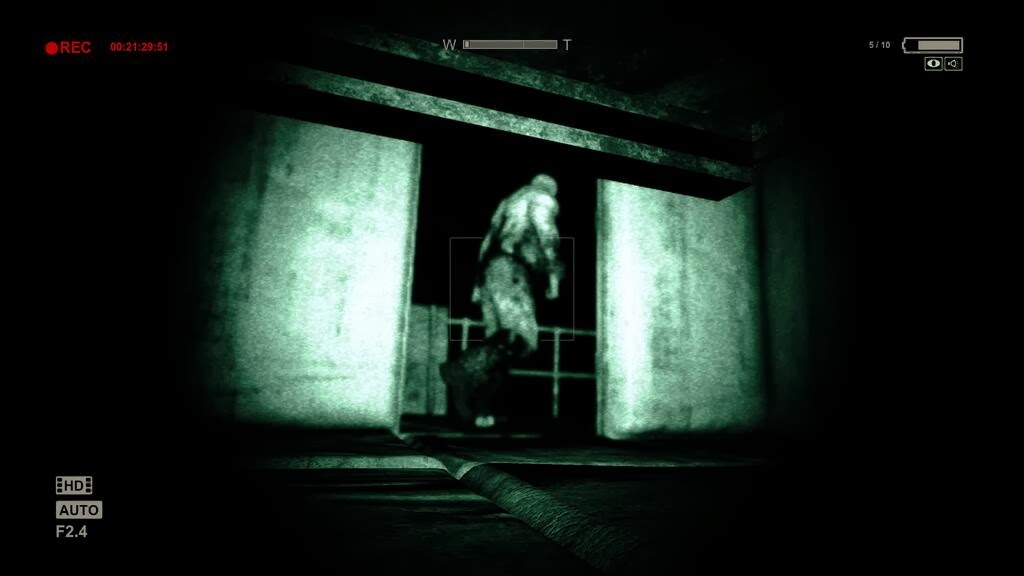 The story involves a bloody massacre, a deranged prophet, and Science Gone Bad that turns men into monsters. Realism in storytelling absolutely isn't something I need, but Outlast's writing is so stupid and so forced that it takes away any suspension of disbelief I could have. "Don't go where you don't belong" has been a horror cliche for as long as horror stories have been written, but the way Outlast handles this situation is amateur in a way that would make a Friday the 13th sequel blush. Miles chooses to visit the asylum (alone, in the middle of the night, with no flashlight) on the urging of an anonymous tip, and immediately upon arrival finds rooms upon rooms of dismembered body parts and buckets of gore. This right here is the moment he probably should have turned around and left, but of course then there wouldn't be a game. 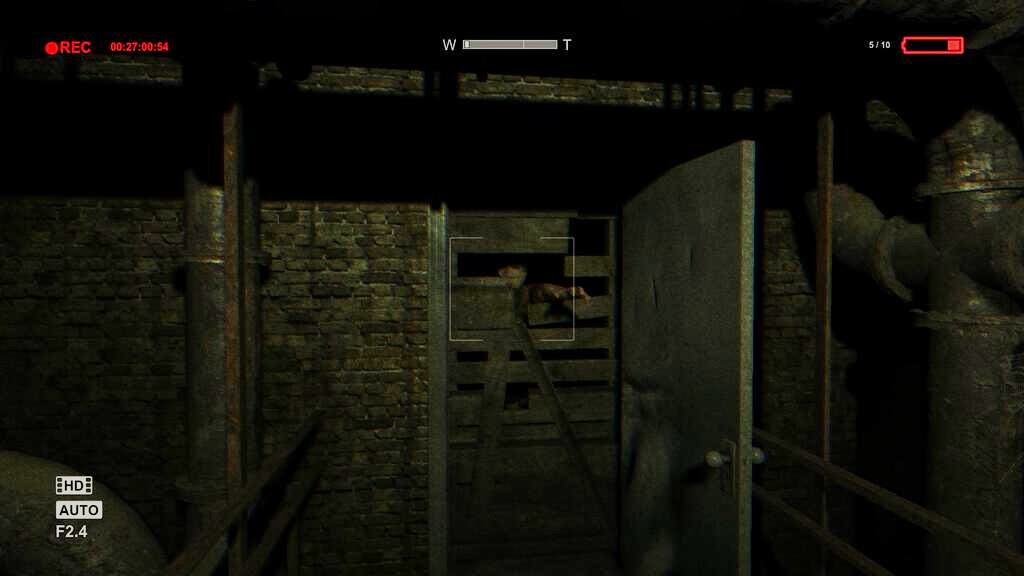 After a few puzzles, Miles is knocked unconscious for the first time and locked away by an Uncle Fester looking antagonist that needs his help and can largely control the asylum's monsters but still lets them try to kill the intrepid reporter for some reason. For the game to work, Miles shouldn't have seen anything out of the ordinary before being captured. There needs to be some reason for him to risk his life staying here beyond "What a scoop!" The player is constantly aware of Miles' fear, as his heartbeat and worried breathing are both audible throughout much of the game, so this isn't a case of a fearless hero with no emotional constraints.

Outlast is a perfect example of the terrible Mature Video Game Writing. Characters yell "fuck" and "cunt" a lot, Miles writes "fuck" his journal a few dozen times, monsters yell over the top, gory threats at you, and you're forced to walk through piles of severed arms because the writers decided it was time for another gross-out scene. It just feels so dumb and forced that there's no way to take it seriously, but the game's writing isn't corny enough for it to be funny. There's no "so bad it's good" element here; it's just bad.

Part of what makes haunted house attractions work is the dichotomy of fear and humor. Workers in crappy costumes popping out at you while loud sounds play is startling but fun in part because it's so kitschy and in part because it's generally a shared, group experience. Haunted houses are a short, directed experience where you're not meant to be genuinely upset after leaving; you exit the house at the end and have a laugh about how silly it was to be scared of a hall full of strobe lights and guys in discount Freddy Kruger masks.
Trying to replicate that in a game isn't an easy task, which is why the telegraphed jump scares here fall so much flatter than they could. Outlast can't be taken seriously enough to be scary, in part due to its terrible writing, but is never silly enough to have a laugh at the end, and the ending itself is a complete waste of time. The only game I've played that really nailed the haunted house aesthetic perfectly is a short sequence in the theme park area of Silent Hill 3.

There's really no excuse for Outlast to be as bad as it is. Until its plot goes off the deep end, the asylum is a setting with great potential, the video camera gimmick is actually quite good, and the idea of survival by running and hiding is fine. Adding as many enemies as it has ruins the tension, adding such terrible storytelling ruins the world it has built, and letting Miles survive mutilation and high falls and letting him effortlessly climb ledges by the tips of his fingers like an Assassin's Creed hero totally ruins the everyman appeal of the character. Ultimately, the game feels like the product of a dozen minds with vastly different ideas on what makes a good horror adventure, and none of them come together in a satisfying way.
Posted by surlaw at 10:22 PM