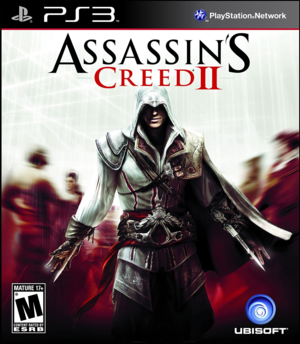 Ubisoft's Assassin's Creed has proven to be one of the most successful new franchises of the PS3/Xbox 360 generation, but one that I somehow missed out on playing entirely as it was ascending in popularity. It was actually videos of 2013's Assassin's Creed IV: Black Flag that got me interested in checking out the series, and since each previous game is easy enough to find for around $10 now, it wasn't much of an investment to just pick up a couple of the old ones. I skipped the original 2007 title at the recommendation of some friends and went right into Assassin's Creed II, the first of a trilogy of games starring Renaissance-era assassin Ezio Auditore. What I found was a flawed but fun game with enough repetitive side content to make any completionist's life miserable.

The Assassin's Creed world is split into two parts. While the majority of the game takes place in Italy in the last 15th century, there's a framing device set in the modern day starring Desmond Miles, a direct descendent of player-character Ezio who gets strapped into a virtual reality device known as the Animus that allows him to relive the experiences of his genetic ancestors. The first game sent him into the memories of Altaïr ibn-La'Ahad in the 12th century, while this one drops him into Ezio's shoes from birth to adulthood in the 15th. From Altaïr's time all the way up to the modern day, there's a running conflict between two groups; the noble Assassins who fight to protect the world, and the evil Knights Templar, who fight to control it. In the modern day, the Abstergo corporation uses the Animus device to view the past and unlock its mysteries in their quest for world domination. 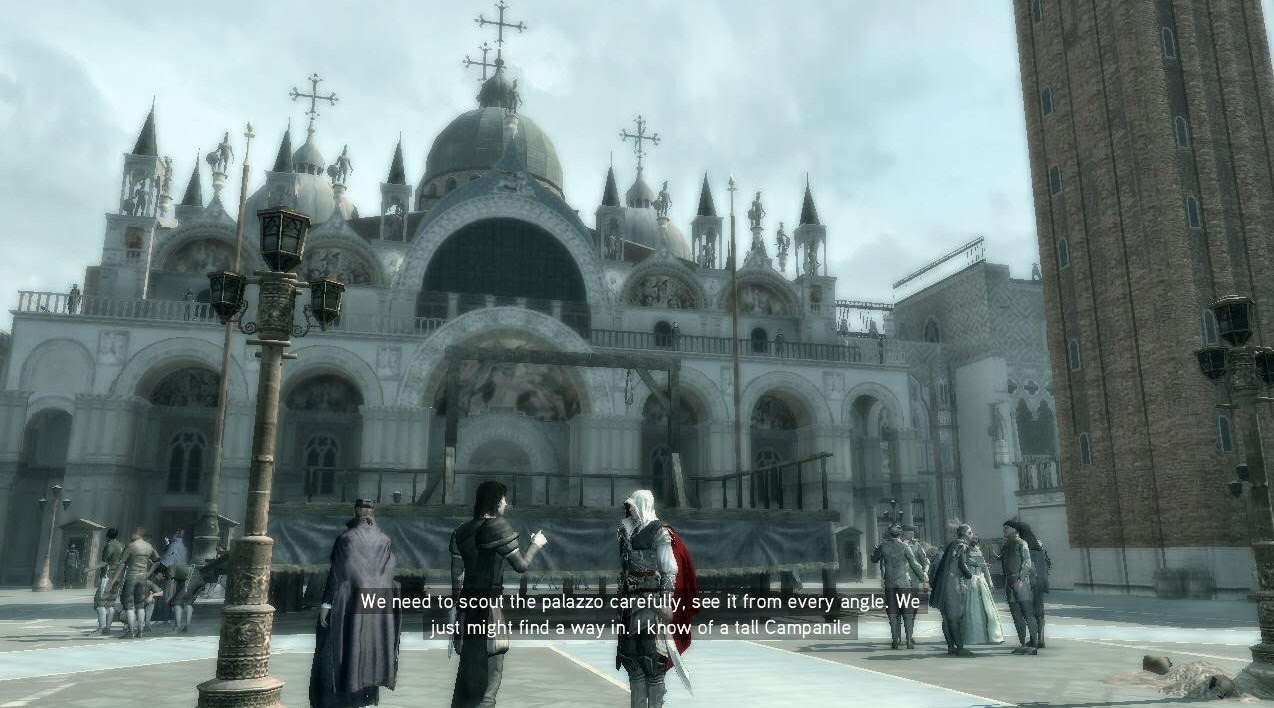 While this framing device isn't a bad plot, it's ultimately unnecessary and feels like a distraction from Ezio's story. Players explore open worlds set in several Italian cities, but exploration is artificially gated based on whether Ezio would have memories of that area or not. I really enjoy exploring the worlds of these games, but being restricted in this way annoyed me regularly. There's also a series of optional puzzles hidden throughout the game left behind by a previous Animus user that Ezio can access and solve to help uncover some truth about human history and a whole bunch of conspiracy theories. I found almost every one of these puzzles fun to solve, but the focus on "everyone important in history was a Templar or Assassin!" got kind of old, and would get worse in the following game. 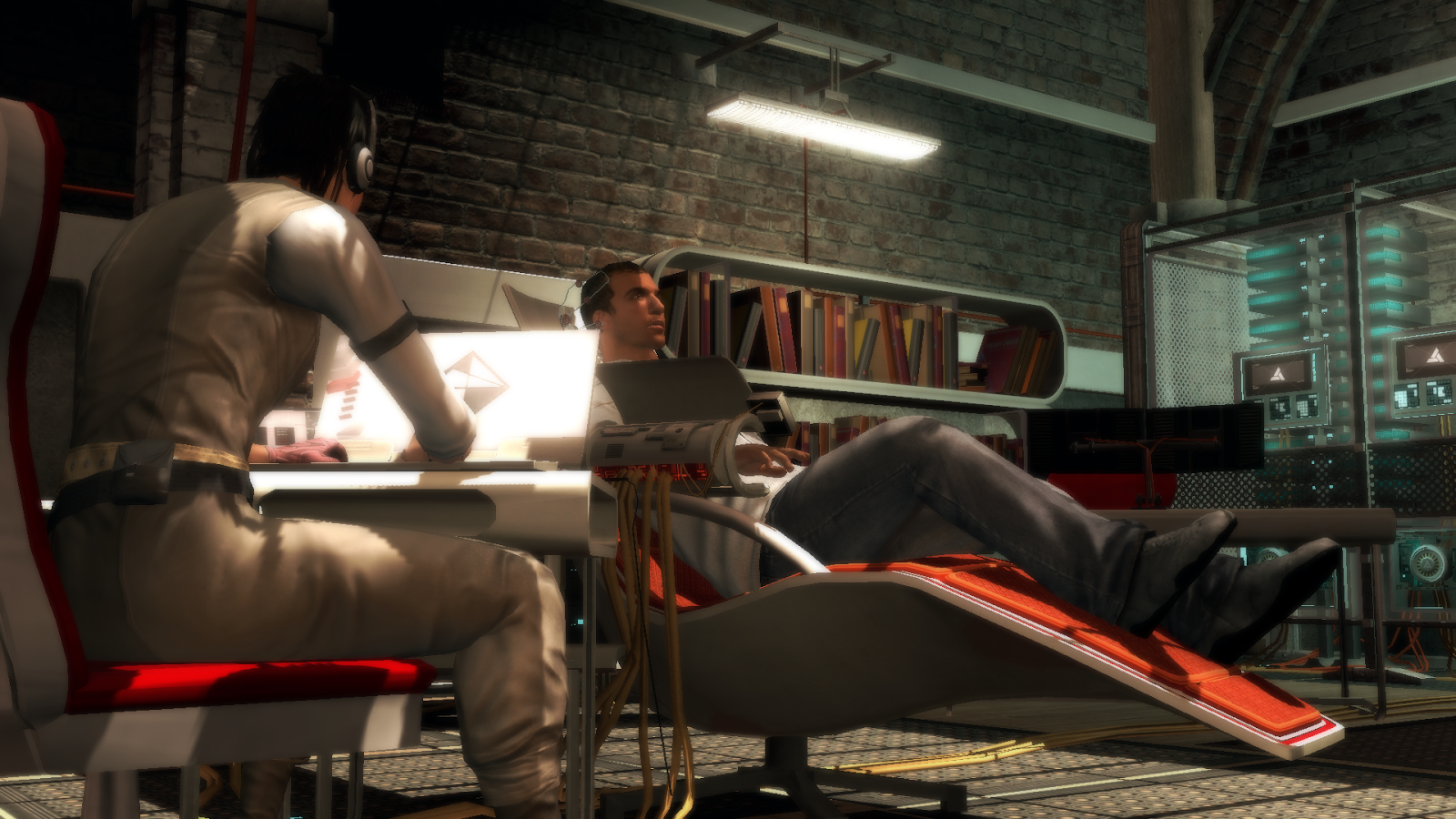 Ezio's story begins as a brash youth, flirting with ladies and getting into brawls with other local brats. Shortly after his introduction, his father and brothers are executed as part of a conspiracy among a group of men seeking to seize power in Italy. He escapes with his sister and traumatized mother to an uncle's estate, where he is trained in the ways of the Assassins so that he may have his revenge. I like that Ezio's story takes place over decades and really does show him growing from a carefree kid to a full, mature member of this order, but it's not plotted very carefully. Aside from the major players, characters drop into and out of the story repeatedly, and aside from its big boss the game's many villains are almost always killed shortly after their introductions. There's an overarching sense of menace form antagonist Rodrigo Borgia as he seeks to become Pope, but his lieutenants are mostly uninteresting characters who never get the time to become true threats.

Something that really doesn't work here is the game's moral sense. Characters are all good or evil, with no shades of gray. The men Ezio assassinates all range from "extremely corrupt" to "completely monstrous," and he never gets into any morally complicated situations with this. He doesn't hesitate to become a killer, because why would he when the only people that get hurt are cartoonishly evil? Ezio spends his life being shaped into a weapon, but the game has no real interest in exploring that theme. There's never a situation where Ezio must kill a good, or even neutral, person for the good of the order. There's no interest in asking how all of this killing affects Ezio; on the contrary, he's a completely well adjusted, friendly guy who behaves more honorably after his induction into the order than he does before. Ezio's a fun character, but he could have been much more interesting if Ubisoft were more willing to a chance to explore the darker side of the Assassins. 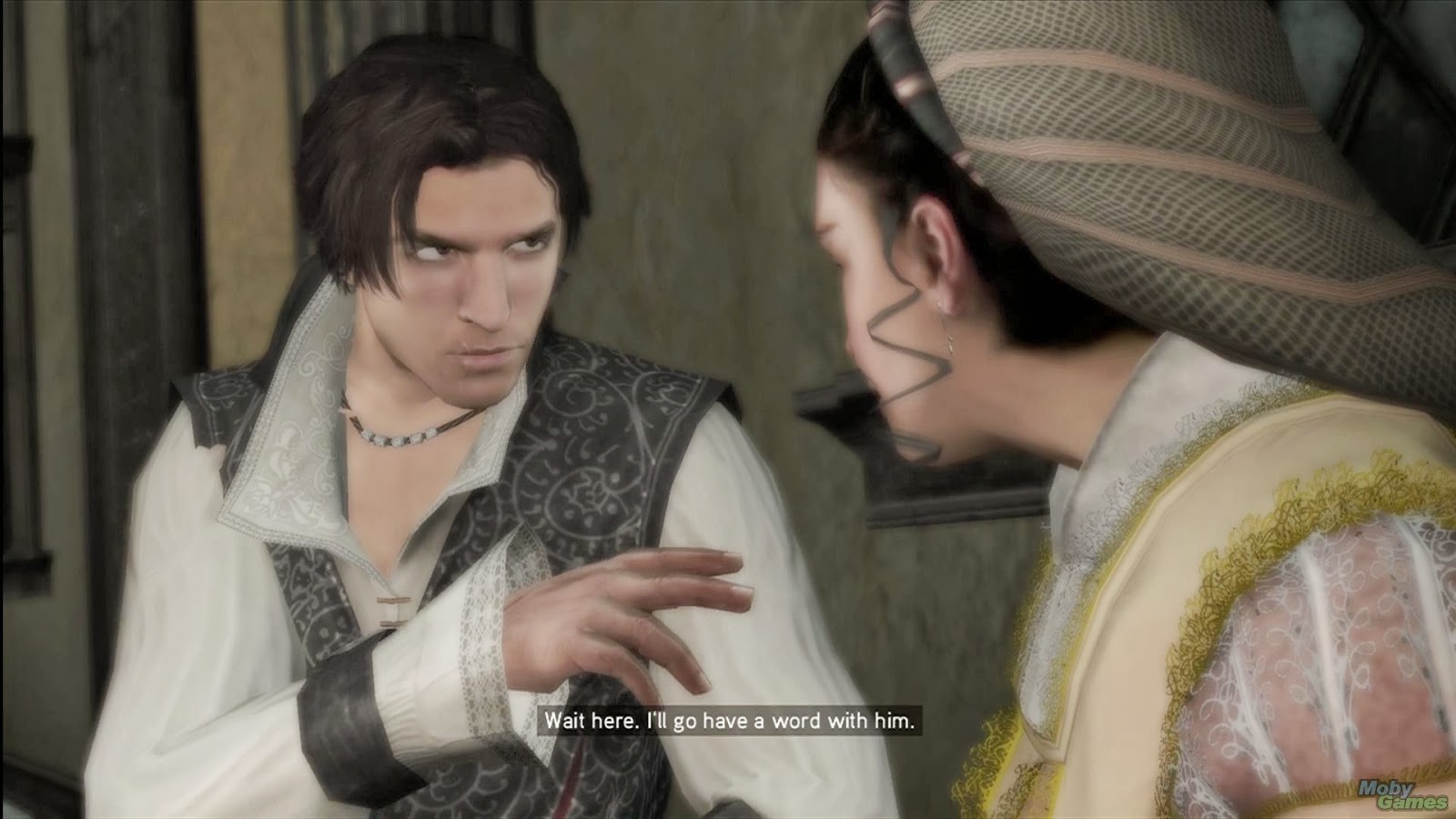 Back in the modern day, Desmond is rescued from Abstergo as the game opens but is quickly placed back into an Animus by three modern members of the Assassin order who hope to recruit him and save the world. Desmond relives the memories of Ezio in order to train physically and mentally to be able to fight, kill, and perform crazy acrobatics in the real world when the time comes. Like Ezio, he's being conditioned into a weapon, but again, little attention is paid to the fact that this is a pretty messed up situation. The fact that he is able to become a powerful warrior capable of great stunts just by playing what's essentially a futuristic video game has its own (unexplored) unsettling dark edge too. For a series that explores the "man as a weapon and the loss of soul" angle in a more interesting way, look to the Metal Gear series. Metal Gear Solid 2 in particular examines the angle of virtual reality used to condition a man into a weapon. Raiden's story there is a lot more nuanced and human than Desmond's, in spite of a greater emphasis on realism (to a certain point) in the Assassin's Creed world.

When it comes to gameplay, Assassin's Creed II is a mixed bag. There's a heavy focus on stealth, and sneaking around guards and dispatching them from the shadows is fun, but there's almost no consequence if caught. Combat is simple and based mostly on properly timing parries, but the window in which parries succeed is extremely wide and enemies telegraph their attacks heavily, making combat quickly become rote. If you're caught by enemy guards, you can run and hide or stand and fight, but since fighting is so much easier and faster than fleeing, there's little reason to not just mow down every enemy that jumps at you. 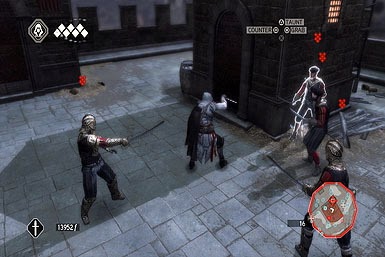 The highlight of the game is its environments. The Italian cities represented here are large, pretty, and offer plenty of high vantage points which are a lot of fun to climb up. I genuinely loved climbing around the buildings here and exploring this world. There are a ton of little doodads to collect, far too many for most people to ever want to find 100%, but I still enjoyed picking them up casually as I played. You don't need to collect anywhere near 100% of this game's collectables in order to earn all of its trophies, but you do need to collect a series of particularly annoying to find ones.

In addition to the main plot missions, there are optional side quests with activities ranging from following people to fighting to racing across rooftops. These are fun for a little while, but like the collectables, there are just way too many of them, and if you're intent on fully completing every one, I don't know how it's possible to not burn out on them and hate the game by the end. I enjoyed this game, but partly because I chose to ignore many of its more ridiculously repetitive elements. 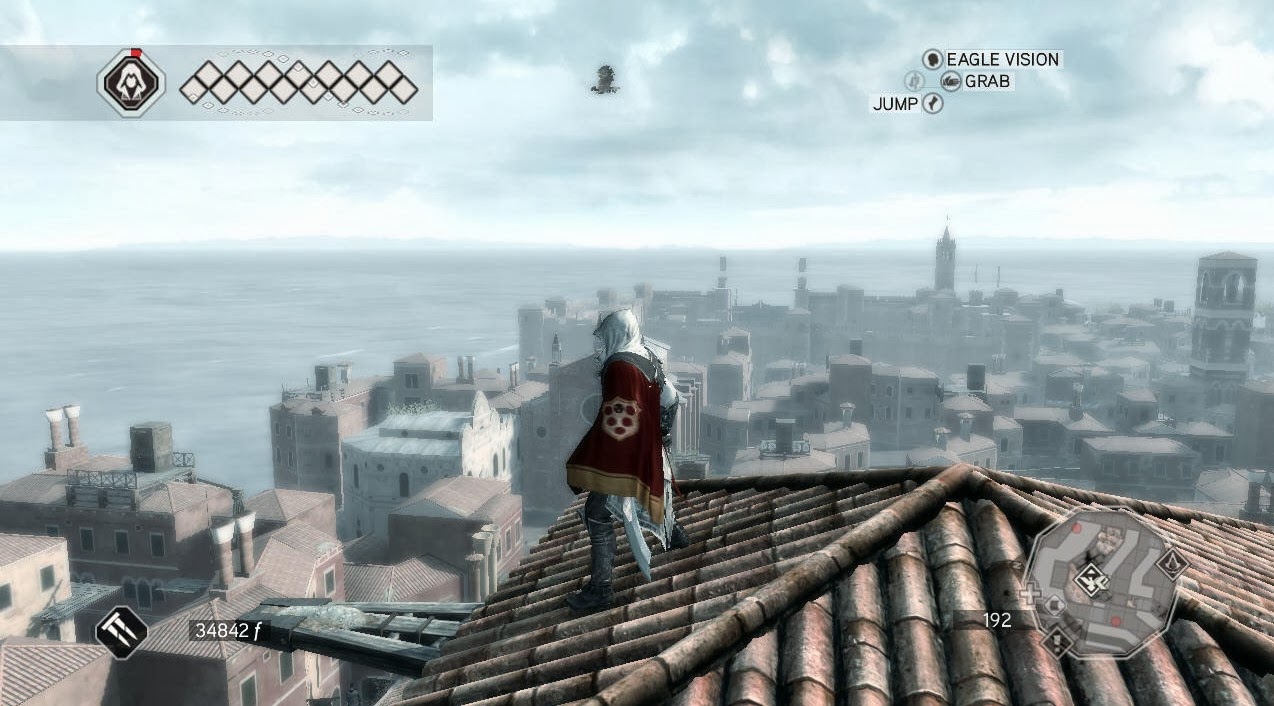 Assassin's Creed II is a solid foundation with a number of little issues that detract from the overall package. Its followup, Assassin's Creed: Brotherhood refines the gameplay and plot pacing and is superior in nearly every sense, but its story will be unapproachable if you haven't played AC2 first. AC2 ends on a cliffhanger with a major villain spared Ezio's wrath entirely to pad out the story and allow for a sequel. It annoys me deeply that Ezio's story is split across three games, but at least Brotherhood's ending legitimately feels like an ending, even if it's part two of three. AC2's does not. The ugliest part of the game, however, is cutting a couple chapters near the end of the story and selling them as DLC. Whether that DLC is good or not, it's a really gross thing to do in a story-heavy game.

I recommend Assassin's Creed II only if you're not a completionist and if you can overlook some ugly bumps. Its world aside, it's not a phenomenal game, and there's a ton of half-met potential here, but for the $5-10 you can find the game for and for the lead-ins to a superior sequel, you can't really go wrong. However, if you're only going to play one Assassin's Creed title, you're best off skipping to Assassin's Creed IV: Black Flag.
Posted by surlaw at 8:09 PM