Resogun is a Playstation 4 launch title by Finnish studio Housemarque that plays like a combination of the company's 2007 PS3 title Super Stardust HD and Williams' 1980 arcade classic Defender. This game's a side-scrolling shooter with a focus on high scores and intense audio/visual overload in a way that feels overwhelming at first but completely natural once you get into a groove. I enjoyed Super Stardust, but Resogun is a much more impressive, addictive title.


As in Defender, players pilot a spaceship through waves of enemies while saving defenseless humans on a planet's surface. Resogun ups the intensity of the battle by adding a series of special abilities that are crucial to survival, as well as a score multiplier that decreases with each second that the player goes without shooting an enemy ship or rescuing a human. In addition to basic laser beams, the three selectable ships here also have a limited number of screen-clearing bombs, a massive Overdrive cannon that can be readied by collecting pixelated debris from enemy ships, and an engine boost that recharges with time that works as both an offensive and defensive maneuver, destroying any enemy in its path while granting temporary invincibility.

Each ship has its pros and cons when it comes to which abilities it excels at, and each offers a unique gameplay experience; the Nemesis, powered by lasers that track enemy ships, makes basic enemies much easier to take out, while the slow but powerful Phobos makes quick work of bosses. The Ferox ship is the most average of the three. The recharge rates on the speed boost and Overdrive attacks vary from ship to ship, so it's worth spending time with each to see which one suits your play style. 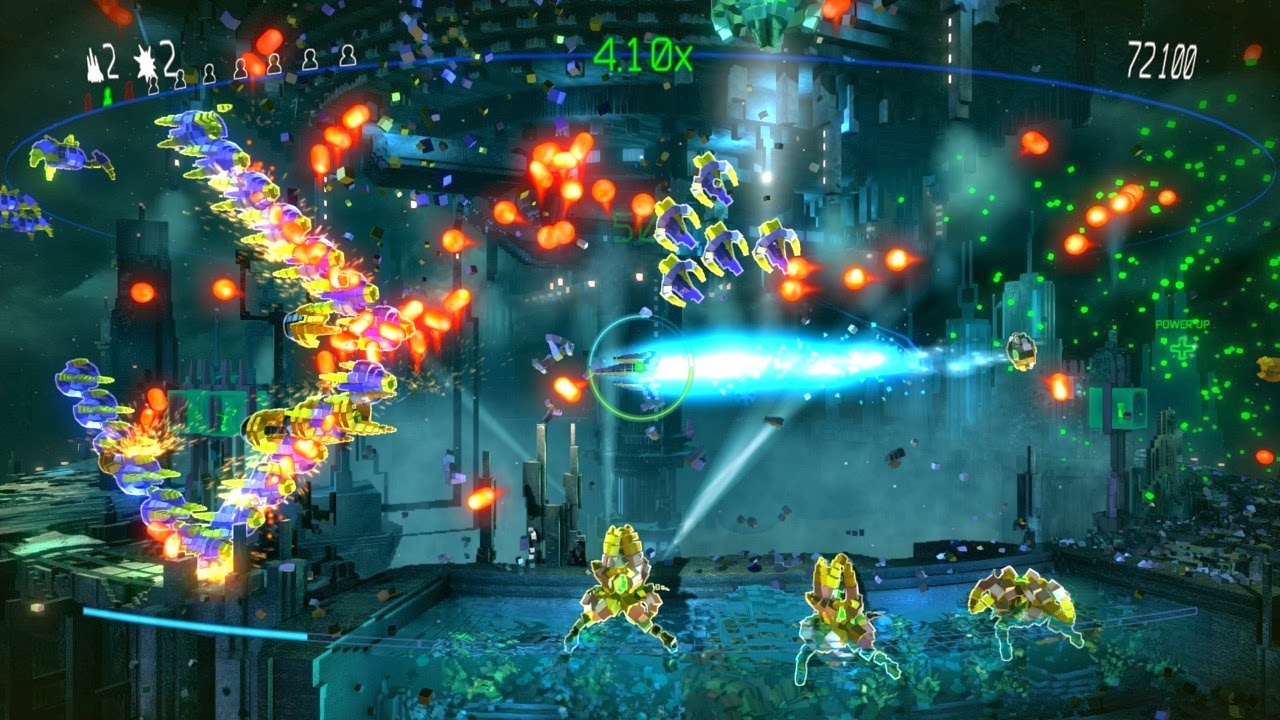 Each of the game's five stages features three waves of enemies, ten humans to rescue, and one big boss. As you fight the enemy waves, your on-board computer will occasionally announce "Keepers detected," letting you know that a wave of glowing green enemy ships is approaching. If you succeed in destroying the Keepers, one of the level's ten humans is released from captivity and you've got a limited time to catch them and fly them to safety. If you take too long, the Keepers flee and one of the captive humans dies. Saving the humans, aside from being the morally right thing to do, gives you new power ups, extra lives, and score bonuses. 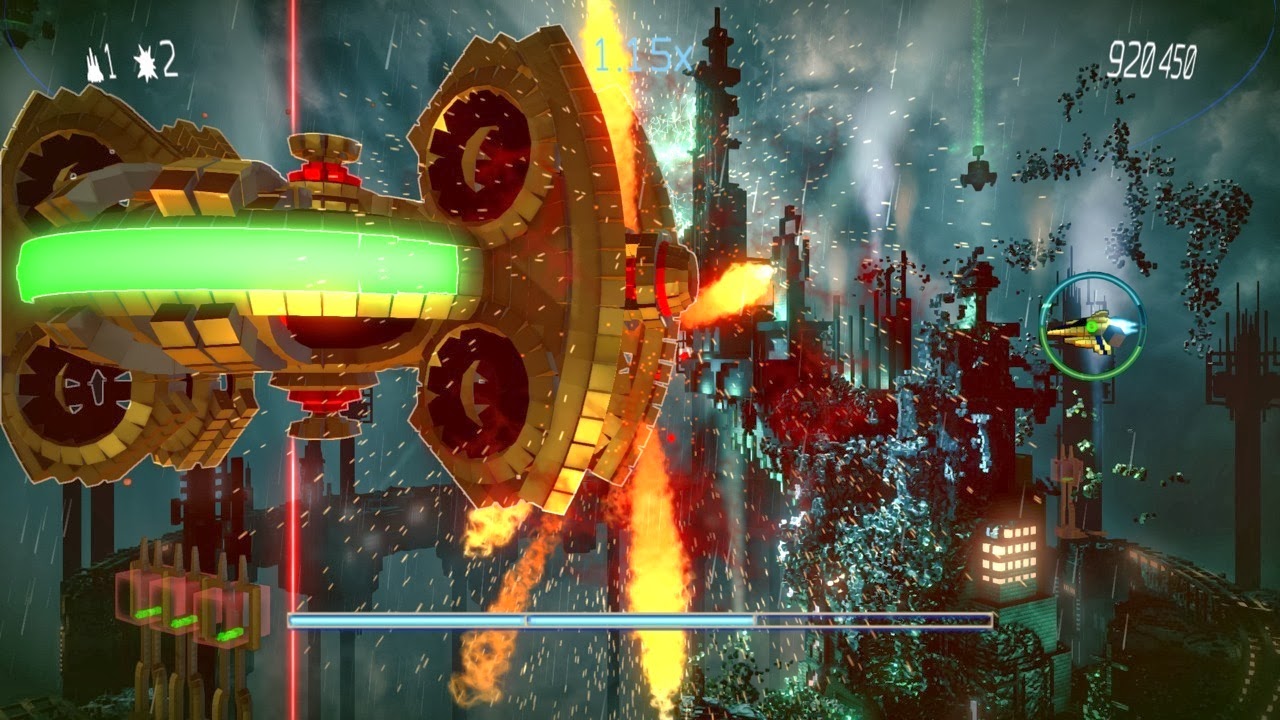 The game's soundtrack features a loud, pounding bass that fits perfectly but isn't exactly memorable. I don't remember any of its tunes once I'm done playing, but what's there isn't bad. Sound effects are nicely done, with explosions often sounding like fireworks and with nice robotic voice clips for the humans you save. Visually, Resogun is a flashy, hypnotic nightmare that progresses from order to chaos when you first begin and back from chaos to order as you get into your groove. Thousands upon thousands of blocky bits of enemy and environment fly around the stage in a way that truly fits the game's modern-meets-old school aesthetic. Both in style and feeling, Resogun is to Defender what Galaga Legions and Pac-Man Championship Edition are to classic Galaga and Pac-Man.

Resogun's the first game I've put any time into on the PS4, and I'm completely satisfied with it. I love old-fashioned arcade games, and I've said many times that I love these modern takes on that classic style. Resogun takes Defender's core mechanics and adds some wonderful new layers, giving players one of the best experiences currently available on this system. 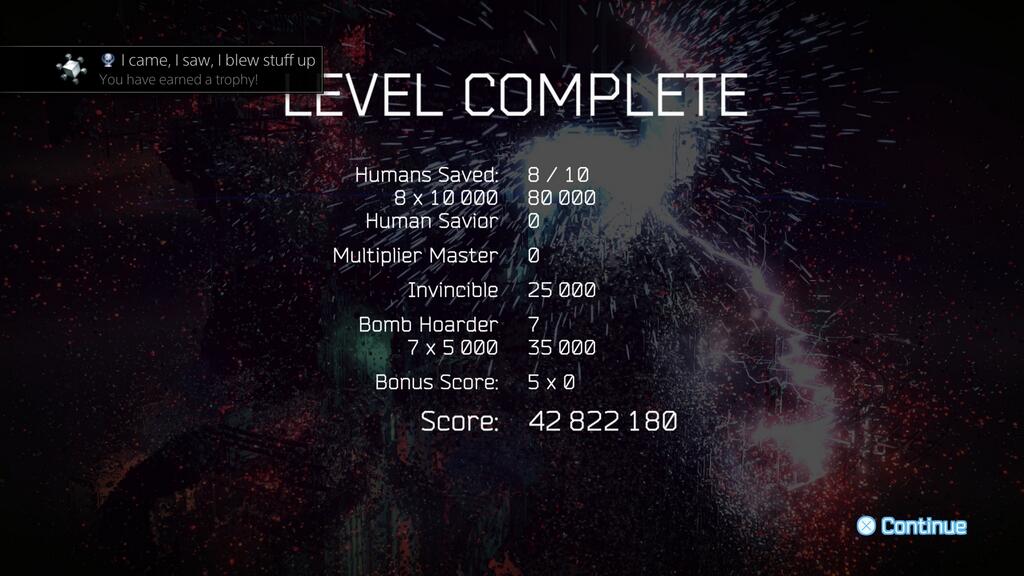