Wayforward Technologies is probably my favorite indie game team. From A Boy and His Blob to Contra 4 to DuckTales HD to Double Dragon Neon, they've made a name for themselves as the company that takes stagnant franchises and revitalizes them in wonderful ways. Bloodrayne: Betrayal is a title in the same vein. The original Bloodrayne games, developed by Terminal Reality in 2002 and 2004, were mediocre action games that managed to earn a small following and inspire three bad looking movies. I had no interest in the series, so if not for Wayforward's involvement, I would have never considered giving Betrayal a shot. Unfortunately, this one's a bit of a misfire.

Bloodrayne: Betrayal is a 2D platformer/beat em up starring a sassy vampire named Rayne whose objective is to kill all the other vampires. There's a bunch of cutscenes throughout the game's 15 stages, but not a single one is memorable or interesting. A few supporting characters show up to taunt, guide, or betray Rayne, but none of them give you a reason to really care. The game's art is gorgeous and its animation wonderfully fluid, but its character designs are dull outside of its boss fights. 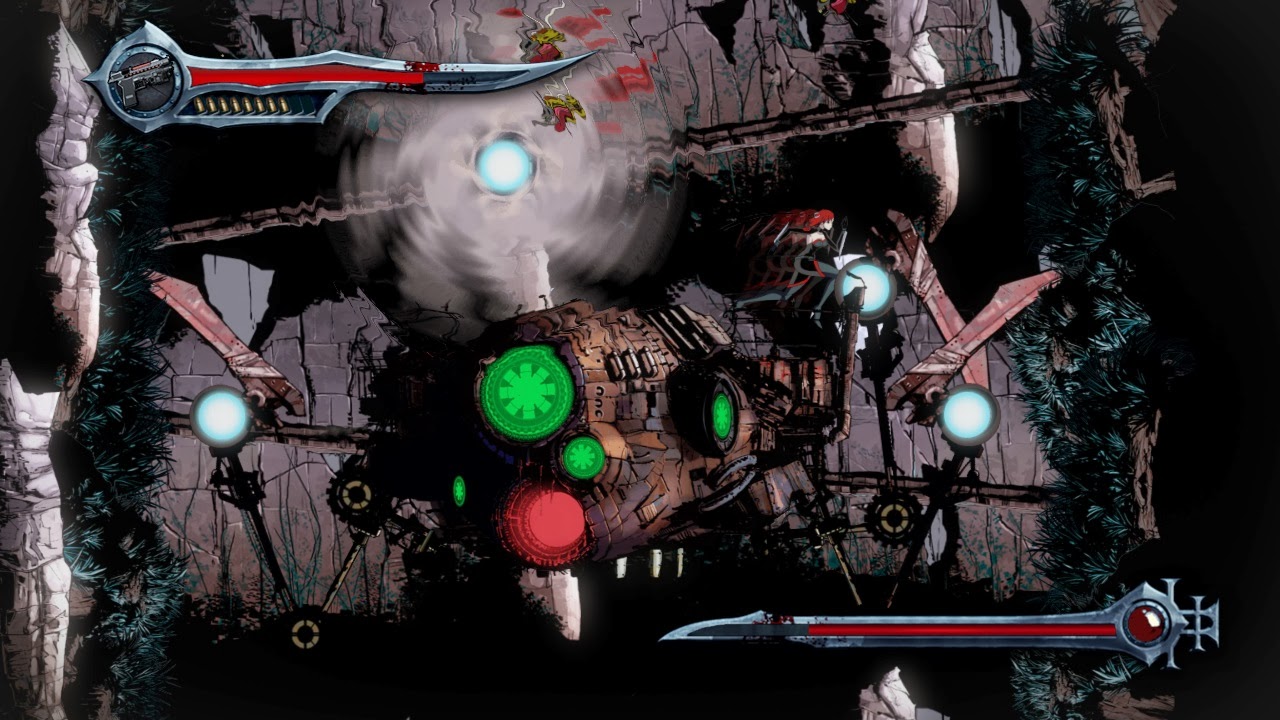 Rayne can fight enemies by using swords, two different guns,  and draining their blood to restore her health. Partially drained enemies turn green and can be used as living explosives to take out chains of enemies at once. Mixing up your attacks, dashing to avoid damage, and taking out enemies quickly all contribute to an overall score at the end of each stage. I felt I had the mechanics down pretty well and very rarely died in battle, but I still earned a nice fat F grade at the end of almost every successfully cleared stage. Combat feels decent and flows well, but it's easy to get hit by cheap shots when there are way too many enemies on screen and almost every encounter has two or three more waves of enemies than necessary. A smaller number of deadlier enemies would have been more fun than long waves of mostly cannon fodder when you're forced to fight every single enemy to progress.

When you're not fighting, you're platforming. Bloodrayne's platforming ranges from mindlessly easy to obnoxiously precise, and while you have unlimited lives, it's extremely annoying to die from failing a jump and have to refight another four waves of monsters to get back and give it a second shot. You can eventually gain the ability to turn into a bird and fly, but the game puts hazards down that prevent you from using your bird form in places you'd want to use it most. The mixture of brawling and precision platforming make this game feel like an sloppier, far less fun ancestor of Guacamelee, a game that does everything Bloodrayne tries to do but actually gets it right. 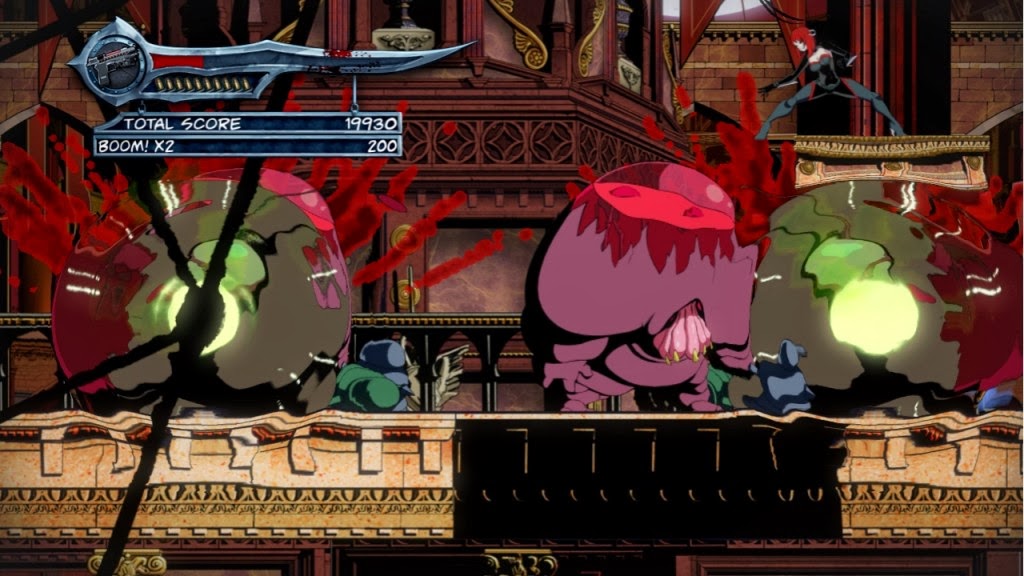 The platforming is challenging, but I never really found it fun. The final stage of the game involves escaping from a collapsing castle and is probably the least fun Collapsing Dungeon Escape Stage I've ever played. It's hard to see where you're going, it requires you to memorize the layout to get through, and it's ugly. Weirdly, it's a very similar stage to the new final stage Wayforward added to their remake of DuckTales, and it wasn't any fun there either. Most of the standard combat is dull too, so the only thing the game really has going for it is its boss fights, which are generally pretty fun.

Stylistically, Bloodrayne is a very pretty game on a technical level with some real junk for design direction. Stages and characters are drawn very well, but they're not fun to look at. There's fountains of blood everywhere to the point that it feels kind of embarrassing to look at, and I'm pretty sure this is the goriest Teen rated game of all time, and I can't even comprehend how it got this rating when most Mature games I play aren't this gory. The one perfect part of the game is the soundtrack, provided by Wayforward regular Jake Kaufman. Every track is a hard hitting, gothic rock piece that sounds fantastic. His music is the highlight of the game, and I'd recommend picking up the soundtrack over the game itself in a heartbeat. Kaufman's possibly my favorite game music composer right now, and he's in fine form here. 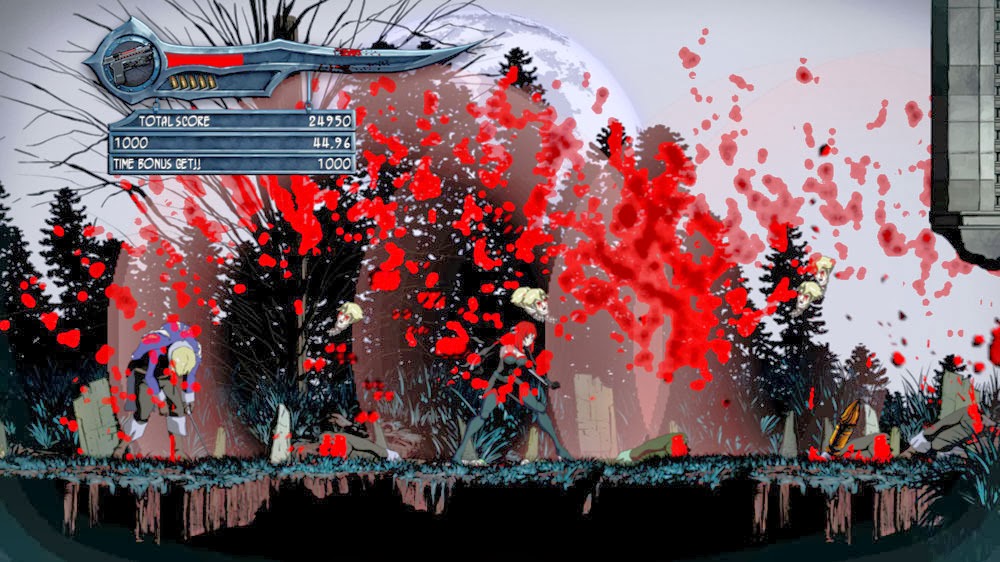 As a big Wayforward fan, I'm sad that I really didn't enjoy this game. I love platformers and beat em ups, but this one didn't satisfy what I was craving in either direction and it's not nearly as polished as Wayforward's usual games. There's a decent core here, but it's all put together in a sloppy enough way that I just couldn't have much fun.
Posted by surlaw at 10:34 PM