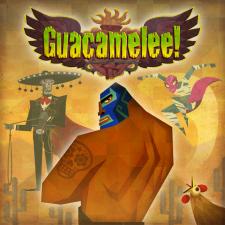 Guacamelee! is the third title from Drinkbox Studios, following up 2011's Tales from Space: About a Blob and its 2012 sequel, Tales from Space: Mutant Blobs Attack. Featuring well designed, frantic beat em up action and super smooth platforming, Guacamelee! is an extremely good game with a great visual style. I have yet to play either of the Tales from Space games, but this one certainly makes me want to go back and give those a look. Guacamelee! is definitely my most pleasant gaming surprise of 2013. As a nice bonus, anyone who buys the PS3 version receives a free copy of the PS Vita version. I don't own a Vita myself, but that's a great extra.


The story begins with Juan, an agave farmer living outside of the small Mexican village of Pueblucho preparing for a Day of the Dead celebration. The village is attacked by evil skeletons, the president's daughter is kidnapped, and Juan is killed. Shortly after arriving in the world of the dead, Juan encounters a blue-skinned luchador named Tostada, who a second player can control in co-op mode (two players can play on the PS3 together, or one can play on the PS3 and the other on a Vita.) She helps Juan embrace the power of Lucha Libre and returns him to the living world to track down the evil Carlos Calaca and save the president's daughter. It's a silly, fun story with a great Cartoon Network Studios look to it.

Aesthetically, Guacamelee! is phenomenal. The animation is simple but smooth and everything looks great in motion, the colors are extremely vibrant, and the music could not fit the game better. Its sound effects aren't anything special, but they aren't bad by any means. This is kind of good, as it allows you to listen more closely to the music without having too many punchin' noises playing over it. There's no voice acting, which I think was a good decision. It wouldn't have fit the old-school meets modern vibe that the game goes for. 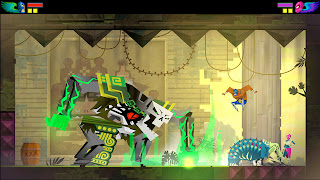 Guacamelee!'s world is split into two villages, seven main dungeons, and one optional one. Progression is linear, but in Metroid style, there are plenty of optional paths and power-ups to find by going back to earlier areas once you've gained new abilities. Each area has its own map and item completion rate, so it's nice and easy to go back and see where you still have secrets to uncover. Aside from one or two things that I had to look up, all of the game's secrets are reasonably easy and fun to find once you start exploring. Drinkbox did a great job with the game's difficulty, as its platforming is always challenging, but the most extreme, pixel-perfect challenges are reserved for optional areas, mostly ones where you find special orbs required to unlock the game's true ending.

At first, combat is pretty straightforward, with only one button to attack with and different moves executed simply by holding different directions. As the game continues, players unlock more and more special moves, each with its own colored element, which are required both for combat and for platforming. Some of the jumping puzzles that require the using of fighting moves to cross areas are quite clever, and some of the later battles are absolutely intense. On Hard difficulty, some of the very last non-boss fights feel a little unreasonable, as they're more difficult than the actual bosses, but on Normal, everything is fair. The bosses are all quite different from one another and each is a lot of fun to fight. 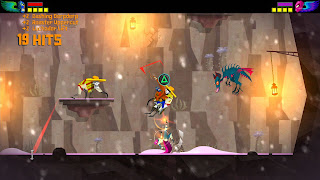 It took me about six and a half hours to clear the game with 100% collection on Normal, and four with a lower completion rate on Hard. I've seen people say this game is short, but I think this length is perfect. There's no unreasonable backtracking, fights vary enough and introduce new enemies often enough to not get stale, and the difficult platforming parts always have very generous checkpoints, so you never feel like you're wasting time. The pace is perfect, you're constantly uncovering new abilities and strategies. There are leader boards for comparing your final time, both with and without 100% completion, to other players. It's definitely worth another play or two after your first time through, so for $15 for the package containing both the PS3 and Vita versions ($12 for PS Plus members) I feel the game's a great deal.

As far as the action and platforming goes, I've got zero issues here, although my fingers had some trouble in later parts of the game since there are times when you need to use almost every button on the controller in quick succession. My only issue with the game at all is that while it's super charming and has some great luchador jokes (my favorite is the toilet-masked luchador El Baño), it goes way, way overboard with internet memes and retro game references. If done subtly, it could work, but when you've got pixel outlines of Mega Man, Mario, Space Invaders, Donkey Kong statues, an advertisement for Mega Man E-Tanks and many more, it's anything but subtle. When there are posters scattered around town with Rage Faces, Grumpy Cat, Insanity Wolf, and many, many other internet memes, it really takes me out of the game. Nothing made me more unhappy than seeing a poster for a certain terrible bear character from 4chan. 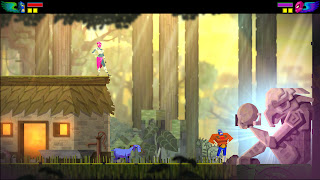 Metroid's power-up granting Chozo Statues appear here, called Choozo Statues, and both look the same and serve the same purpose. I really don't see how they're distinct enough to be legal, even as satire (especially since nothing about them is being satirized.) I clearly don't have a problem with relying heavily on an outside reference to make a game work, but there has to be more to the joke than just "I know that thing," and I don't really feel that there's any depth to the reference jokes here. Either you know the thing, or it looks like nonsense. A good reference joke needs to be funny even if the audience doesn't know what's being referenced; the knowledge of its origins should be an added layer of funny, not a base requirement. At least the Grumpy Cat sign is a satirical advertisement for cat food; there's a poster with Strong Bad on it whose text just says "Fuerte Malo." There's no joke there. Also, calling the dashing punch attack the "Derpderp" is incredibly stupid.

Ultimately, Guacamelee! is a fantastic, beautiful game with a sense of humor that ranges from good and whimsical to trashy and cheap. Almost none of the internet and game references appear outside of posters in town, which kind of gives me the feeling that they were added late in the game as a cheap gambit to get hype on the internet. I could do without them and the "Mexicans have tequila everywhere" jokes and would have preferred more lucha puns, but that's just me. If you love internet memes and love yelling that you know that thing, you'll love them. At the very least, I respect how garishly brazen the team was when it comes to skirting legal issues with some of these jokes. The whole thing gives you the feeling of walking into a shady dollar store with miscolored Spider-man knockoffs, which is kind of awesome, but at the same time vaguely uncomfortable. Still, it doesn't really matter much. For both action and platforming, Guacamelee! is already one of the year's best games and I fully recommend it. 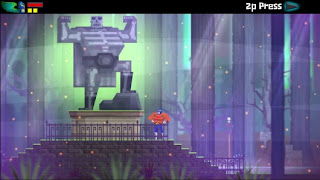