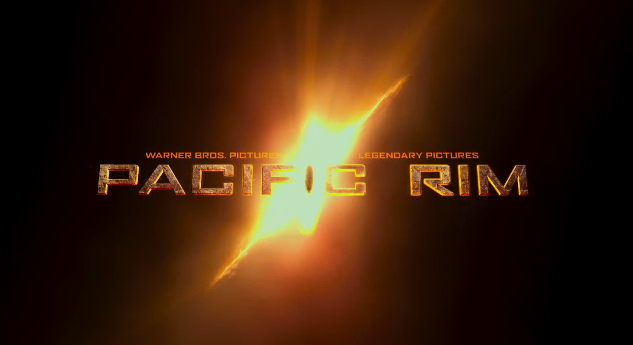 Guillermo del Toro's Pacific Rim is an absolute rarity among summer blockbusters; it's a family-friendly action film that skews younger than most action movies, it's not based on an existing property, and it's about giant robots punching sea dinosaurs. Del Toro is best known for his stellar visuals and creative creature designs, best seen in the wonderful Hellboy II: The Golden Army (2008) and Pan's Labyrinth (2006). Pacific Rim's monsters, machines, and set pieces are detailed, expressive, and a ton of fun to watch, making del Toro's resignation from directing the film versions of The Hobbit even more painful than it already was. With great art design, a fun, campy storyline, and a couple of good performances, Pacific Rim is a quality monster film but sadly lacks much of a human element.


Like Dark City and Oblivion before it, Pacific Rim opens with a needlessly long exposition dump explaining the world. Rather than dropping the audience into its world at street level to marvel at its giant monsters, the film spends an excruciatingly long time explaining that destructive monsters, called Kaiju, emerged from a dimensional rift in the ocean and humanity fought back by building Jaegers, giant humanoid machines on the same scale as the sea creatures. There are a few nice glimpses of how the world has changed since the appearance of the monsters; the world is now more unified than ever, children are buying toys based on the beasts, Jaegar pilots become the new rockstars, cities are rebuilt around the remnants of Kaiju bones, and there's a great shot of a foam-suited Kaiju clowning a Japanese talk show. However, all of this information could have been shown naturally over the course of the film rather than stuck at the front. The first real scene opens seven years after the first Kaiju appearance, and the majority of the film takes place five years after that. With the way the opening is edited, this feels like the final chapter of a trilogy, with a very long "previously on" montage rather than an introduction to a new world. 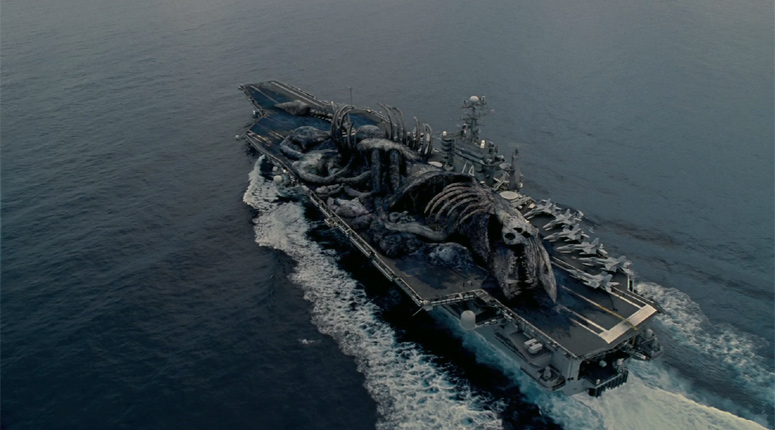 The badly paced opening is made more frustrating by a later scene, in which we get to see a flashback to one of the Jaegar pilots as a child running from a Kaiju in the early days of the attacks before being saved by the commanding officer of the Jaegar force. It's a fantastic scene, and it captures the size and ferocity of the Kaiju better than any shot in the movie, and it would have made a stellar opening scene. Instead, it's presented as a twist later in the film, to explain why this character is so upset by Kaiju (apart from the "they're destroying everything everywhere" deal) and why her commander means so much to her. There's no real benefit to either the characters or the plot in keeping this incident a secret for the first half of the film, and rearranging scenes to put it at the beginning would have been a far better way to hype up audiences from the first shot.

This isn't the only instance of weird pacing here; there are three major Jaegar vs. Kaiju fight scenes, with the first paced pretty perfectly, the second feeling way overly long, and the third feeling way too short. The second fight is the film's centerpiece, and there are some great parts (each time our main Jaegar, Gipsy Danger, pulls out a new weapon something amazing happens), but much of the fight drags on longer than it needs to. If the film remained the same length, but with a slimmer second act and beefier third, I think it would eliminate some of the problems I had with its pacing. It would have been nice if the very last Kaiju fought was more intimidating than one defeated halfway through the movie, too. I would have also liked to see more of the Russian and Chinese Jaegars, who get almost no screen time and whose pilots have no lines outside of yelling battle commands. Between these two machines you've got five visually interesting characters who ultimately feel less like characters and more like props. 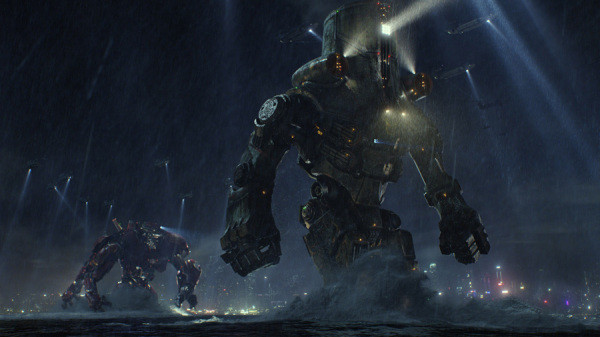 The hero of this story is Raleigh Becket (Charlie Hunnam), the handsome soldier with a heart of gold with a tragic past and blank slate personality. Raleigh feels like he's meant to be an audience projection character, a means for kids watching the movie to say, "That's me, I'm that guy." It's a typical way of character writing more at home in video games and anime, two sources Pacific Rim takes great influence from along with its obvious Godzilla influence, than it does in a film. Jaegars work by connecting the brains of two pilots to control the machine, since using a single pilot causes massive damage from information overload. Raleigh originally pilots the Gipsy Danger with his brother, who is killed in battle while their minds are still connected. Raleigh leaves the Jaegar program for five years after this, but it doesn't seem to matter much to his mental state in the long run.

Conceptually, two pilots sharing a brain, devouring each other's emotions and memories, is fascinating and deserved more attention than it got. There are brief mentions of Raleigh feeling the fallout of his brother's death, but no real attention is paid to the ideas of shifting identity or acquiring personality traits from the people the pilots have mind melded with. I understand that this movie is meant to be very light fare, but this is such a psychologically intense scenario that introducing it and only paying the faintest of lip service to its consequences is weak, and it weakens the already paper-thin main characters. 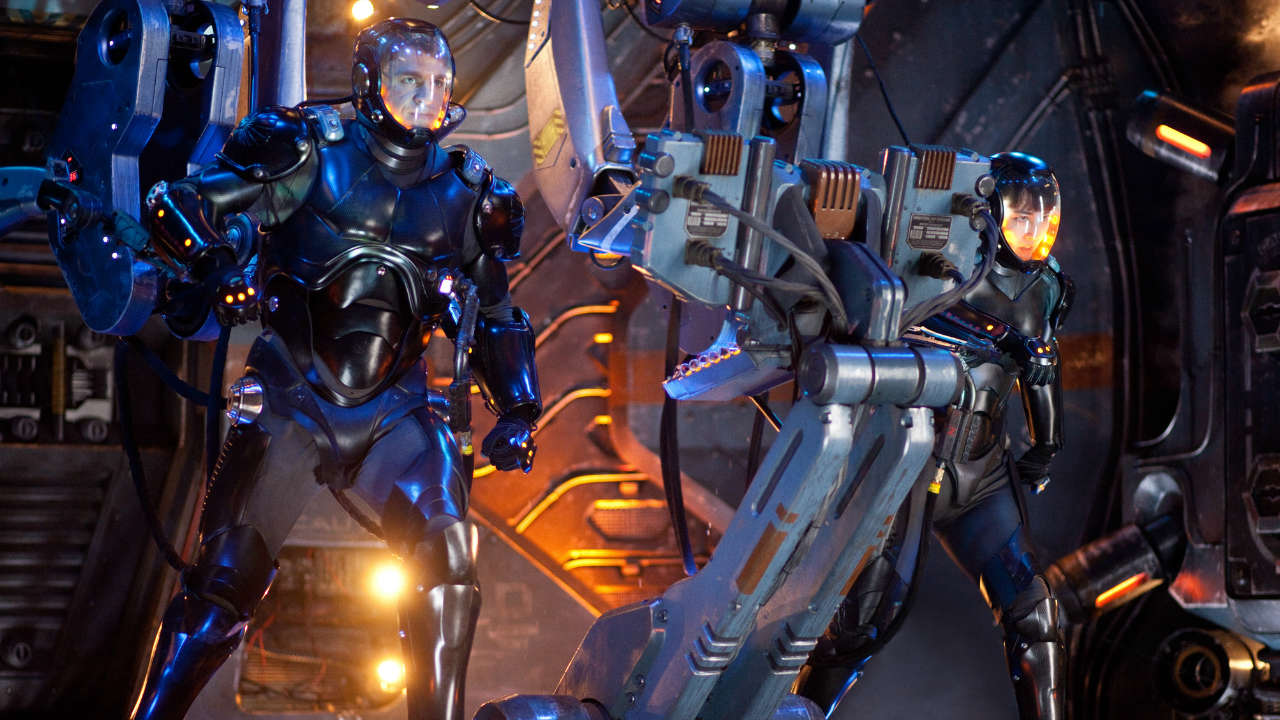 The film's secondary lead is Mako Mori (Rinko Kikuchi), a Japanese pilot in training whose commander and father figure (Stacker Pentecost, played by Idris Elba) doesn't want her leaving the simulations to fight in the real world. She's the only woman in the film of any consequence, and feels on the surface very capable; in combat, she's absolutely Raleigh's equal, and she's never used for fan service and never leered at by the camera. She has a strong sense of justice and determination mixed with a hunger for revenge, and seems very emotionally sure of herself. Then, once she's finally in a real Jaegar, her emotions overwhelm her and she nearly kills everyone. Raleigh, with actual memories of dying via his brother and a recent near death experience in this very machine, would be the logical one to have a breakdown, but he remains calm and cool every second of the film. Mako is instead the one to fall apart due to childhood trauma. She gets over it and becomes an effective pilot, but maybe the one solitary woman in the film shouldn't be the only pilot who becomes crippled by an abundance of emotion. 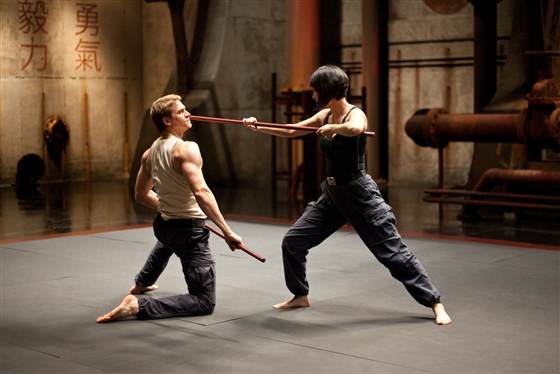 Pacific Rim is light on messages, outside of an overt "the monsters are our fault!" deduction which states that global warming and human pollution has transformed Earth into a place more suitable for the Kaiju to survive. I liked this concept, as goofy as it is, as a throwback to Godzilla himself being the product of humanity's flaws through the use of nuclear weapons. The other political message of the film is the abandonment of the Jaegar program by the world government as they move away from building giant fighting robots to building giant walls around countries. I actually have no idea why this happens; the Jaegars evolve as weapons as the Kaiju threat escalates, getting stronger with each iteration, while a wall will very obviously do absolutely nothing to stop creatures that regularly walk through entire buildings. There are themes involving the failure of big government, with the heads of the Jaegar program having to go rogue to save the world after the Not-UN cuts their funding, but it doesn't carry any real weight aside from explaining why there are so few Jaegars left. The walls themselves are a ham-handed way of saying, "Look, build all the fences you want, they're not keeping illegal aliens out." 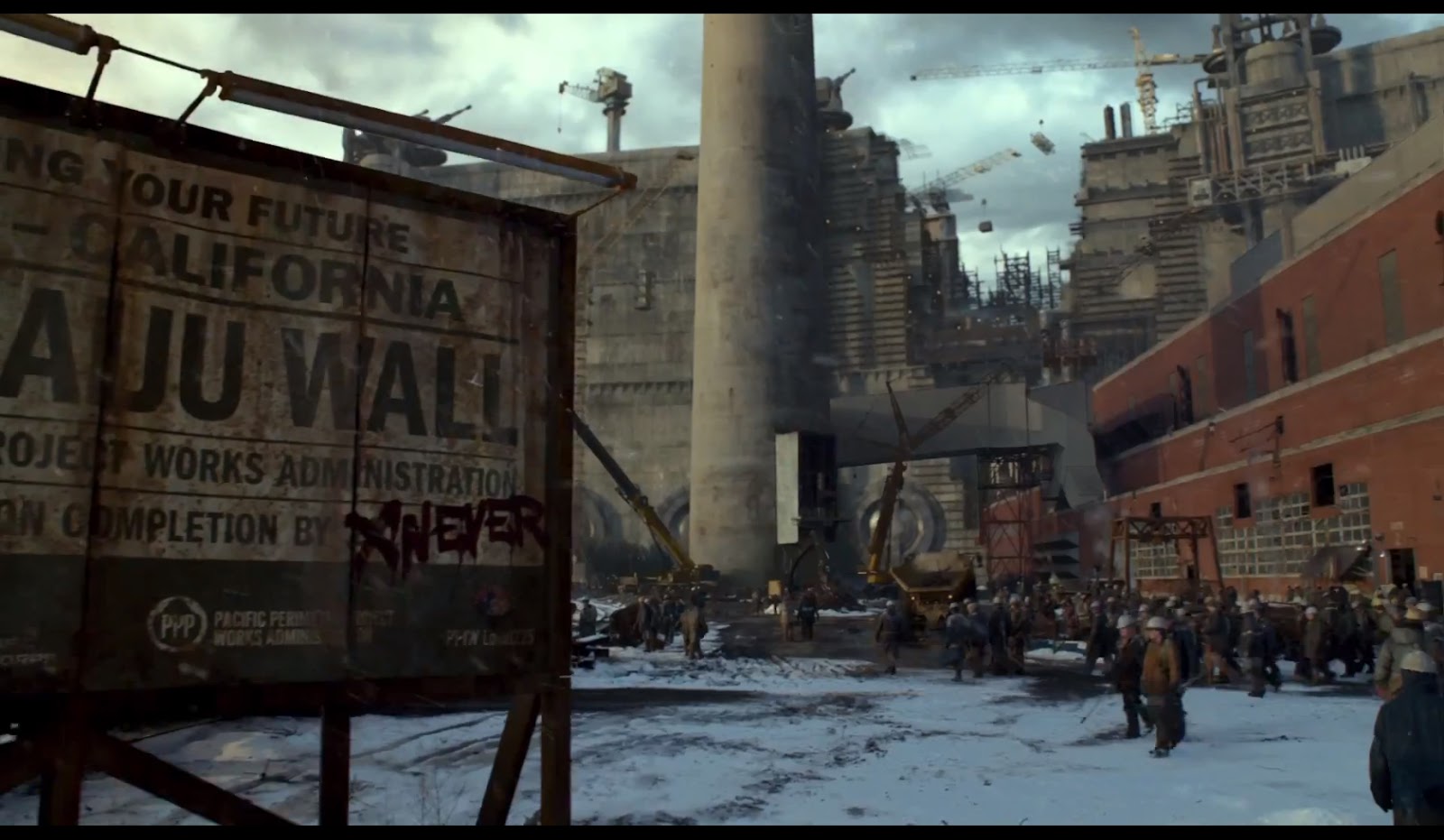 Weakness of themes and main characters aside, there's a lot to like about Pacific Rim, in addition to the aforementioned wonderful art design and effects. The fights may be paced weirdly, but they're a lot of fun, and just stupid enough to work. Every punch is visible, weighty, and solid, in spite of the creatures being entirely CGI. There's no way to get confused about who's punching who. Somehow, the film's comic relief characters are perfect, exhibiting far more personality than any of the main crew ever does. Charlie Day plays Dr. Newton Geiszler, a jittery biologist and Kaiju fanboy, while Burn Gorman plays Dr. Hermann Gottlieb, a straightedge, fussy British mathematician. The two rival scientists play off of each other extremely well, and in spite of being over the top cartoons, feel more human than the rest of the cast. These personality types could quickly become annoying if used poorly, but I loved every scene they had, whether together or apart. Del Toro favorite Ron Perlman also shows up as Hannibal Chau, a black market salesman from Booklyn who took his name from his favorite world leader and favorite restaurant. He only has a couple of scenes, but he steals the show, from his own monstrous appearance to the typically wonderful Ron Perlman swagger. 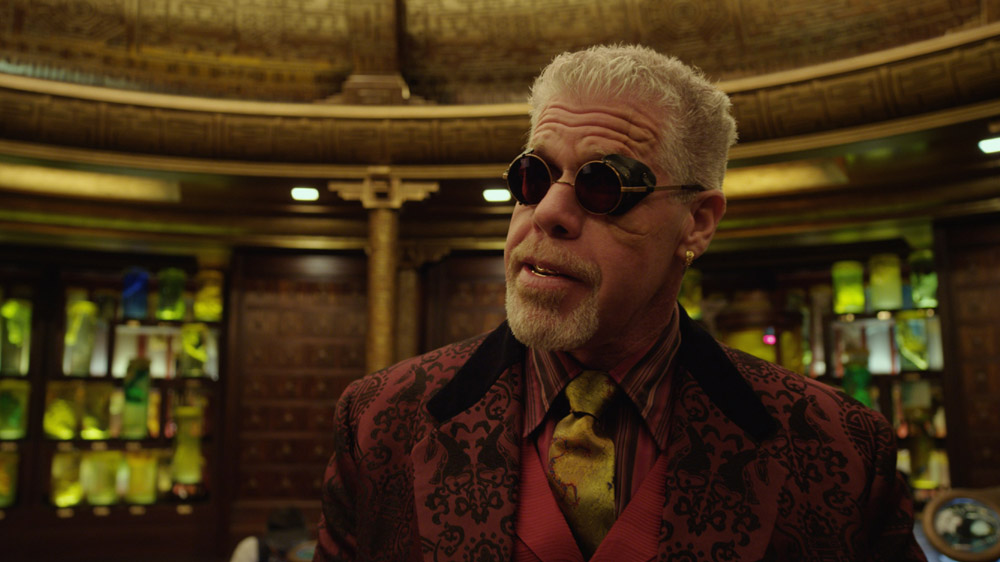 Pacific Rim is a love letter to del Toro's pop culture passions without ever feeling obnoxious about it. The film is the child of monsters from Godzilla to Rodan, and of anime machines from Mazinger to Evangelion. Del Toro even includes the voice of GLadOS from the Portal games as the Jaegar base AI, which was borderline too much for me, but unnoticeable and not distracting if you aren't familiar with the games. I'd love to see him continue to work in this world, especially since he gave himself twelve years of backstory to work with, but at the same time, Pacific Rim stands totally fine on its own. I'd still love to see more of how this society works at the ground level, though. While I take issue with some of the choices he made with it, del Toro shows a ton of love with this film, and I hope that it inspires a new wave of passion for giant monster movies for years to come. If nothing else, it's bound to be an absolute favorite with the right kind of 8-year old kid. As someone who grew up on Godzilla, there were a lot of wonderful sights here, even if the human element was sorely lacking.
Posted by surlaw at 7:10 PM