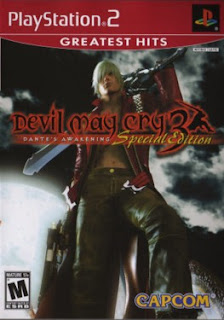 Released two years after the dismal Devil May Cry 2, Devil May Cry 3: Dante's Awakening is a prequel that shows the audience the devil hunter Dante's first big mission. The Special Edition, released a year later in 2006, is the definitive edition of the game and is the version included in the recent HD Collection. The Special Edition adds new boss fights, a much fairer continue system, the ability to play as Vergil after completing the main game, and more. DMC3: Special Edition still has its own flaws, but it's the first game in the series that really starts to do things right.

The story opens with a younger, brasher, much more entertaining Dante having his pizza time interrupted by scythe-wielding ghouls. He fights them by punching a jukebox to get the game's music going, surfing on downed enemies, and shooting pool. Right off the bat it's obvious that this game is going for a much sillier tone than the first time games. While Devil May Cry 1 a few jokey moments, it took itself too seriously far too often, resulting in a whole lot of very dull cutscenes that would get even worse in the second game. DMC3 finally manages to properly balance cartoonish action scenes with completely silly writing, and is the first game in the series with acting good enough to support it, even if it's not stellar. DMC3's a pretty funny game, and is the title that really established Dante as a likeable character, a personality that carried over into the next game as well.

There's a bunch of family drama in this one; Dante and his brother Vergil constantly clash and bicker about their departed father, while newcomer villain Arkham torments his gunslinger daughter Mary, who takes on the rather empty name Lady. Lady plays a good straight man to Dante's cartoonishness and is the first woman in a DMC game whose art design is actually good (DMC4 redesigns her and makes her look terrible, though.) Vergil and Arkham work together to summon a huge tower full of monsters that leads the way to hell and it's up to Dante and Lady to beat those suckers down. 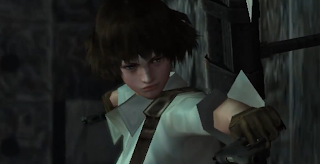 What amazes me most is that both Devil May Cry 2 and 3 are both directed by Hideaki Itsuno. DMC2 is so lifeless and bland in every regard that it's amazing that the same director could put out such a substantially better game. The story still takes itself too seriously at times, and the bad guy's plot is STILL "summon a dark power, take over the world," but it's much more fun to experience. Instead of Dante getting a new gun and saying "whatever," he gets a deadly electric guitar that he rocks out with on a crappy, demon-smashed stage all by himself. He's a complete goofball, and it really makes the game work. 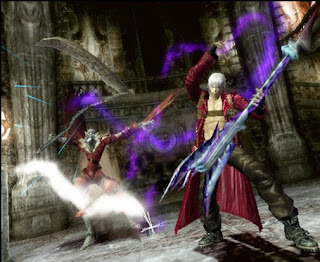 The art style of Devil May Cry 3 is a huge improvement over DMC2, but still not amazing. Too many environments are still too sterile and gray, and there are way too many samey rooms. The majority of the game is spent in the tower, where not a lot changes, though there's a nice, dreamlike world towards the end where physics take a backseat to art design. The graphics themselves are just much nicer overall too. The framerate's more stable, animation is nicer, and the whole game just looks far cleaner than the first two. 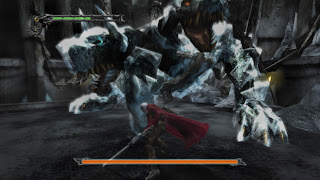 The biggest change to the series' standard swords and guns brawling is the addition of a class system. When the game begins, players can choose from classes focused on evasion, blocking, swordsmanship, and gun fighting. Class can be changed between any mission or at any shops mid mission, as can weapons. This game features the best weapon variety yet, but stupidly, you can only have two melee and two ranged weapons on you at a time, so if you reach a boss and don't have the weapon it's weak against you just have to deal with it and switch them up if you die. At least switching between the weapons you currently have equipped is quick and painless, mapped to the controller's shoulder buttons. Unlike the dumbed down combat of Devil May Cry 2, DMC3 offers more options than ever, and far more fluid fighting. It can still feel like a slog against too many waves of identical enemies in repetitive environments, but you do have a great number of options and the boss fights are top-notch (though I greatly dislike having to refight groups of them before the final mission, a la end of Capcom's Mega Man games.) In particular, the fights against Vergil are wonderfully designed.

The camera is still not perfect, but you do have more control over it than in the previous game, though only in select areas. It doesn't auto-rotate at all as you lock on to enemies, which becomes obnoxious. The game's difficulty is back up to the original game's level, and at times much harder. The amount of frustration you experience is directly tied to which continue system you select. When you begin a game, it lts you choose "Gold" or "Yellow" modes. On death, Gold lets you retry from a checkpoint if you die, so failing against bosses isn't too frustrating since you can immediately give it a second shot. Yellow mode makes you restart a stage entirely unless you buy expensive resurrection items. Having to replay a stage because you died at a boss is a terrible excuse for difficulty, and Yellow mode was the only option in the original release of DMC3. Gold mode is the single most important addition to the Special Edition. I enjoy Devil May Cry 3 vastly more than its predecessors, though DMC4 remains my favorite. Repetition is still its biggest flaw, and I'm disappointed that they dropped DMC2's visible life bars on enemies. DMC3 features a good variety of difficulty levels and never feels completely unfair on Normal. I don't love it, but DMC3's boss fights and cutscenes are so good that they're enough for me to more or less try and ignore the cannon fodder enemy battles between bosses and the couple of heinous platforming sequences. Personally, I'd love to see a DMC style game that was nothing but boss fights, even if it ended up being a short game. Of the original trilogy, if you're going to play one DMC game, make sure it's DMC3.
Posted by surlaw at 1:00 PM