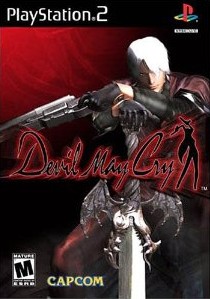 Capcom's 2001 title Devil May Cry set a new standard for combat-focused 3D action/brawler games. While DMC wasn't the first game of its kind, it was the first to really get things right, even if the original game in the series has aged poorly in some areas. From massively popular titles like Sony's God of War series to perfections of the genre like Platinum's Bayonetta and Metal Gear Rising: Revengeance to new takes on old franchises like Konami's Castlevania: Lords of Shadow, modern brawlers owe pretty much everything to Devil May Cry.


Devil May Cry is the creation of Hideki Kamiya, who both wrote and directed the game. Kamiya got his start at Capcom working on the original Resident Evil before eventually becoming one of the chief staffers at Clover Studios and Platinum Games. Kamiya would perfect his formula with Bayonetta in 2009. Devil May Cry began its development as the original version of Resident Evil 4, the high-point of Capcom's Resident Evil series that saw many, many revisions and staff changes before its eventual release in 2005. Some of DMC's Resident Evil heritage still shows through, from the "collect random junk items, put them in their proper places" puzzles to the terrible voice acting to the font and style of text used on objects you examine.

The series stars Dante, a white-haired demon hunter who runs his own monster removal business. He is the son of Sparda, a good-guy demon who messed up all the other demons two thousand years ago. The original game opens with him receiving a visit from Trish, a leather-clad woman harboring a terribly stupid plot twist. She talks him into visiting Mallet Island to defeat Mundus, the demon who allegedly killed his family. Once on the island, story is straightforward and fairly minimal; Dante runs into a series of boss monsters, lightly sasses them, gets bored, and fights. He later uncovers the truth about Trish, his brother Vergil, and his parents and gets an incredibly bad, melodramatic Love Conquers All scene. 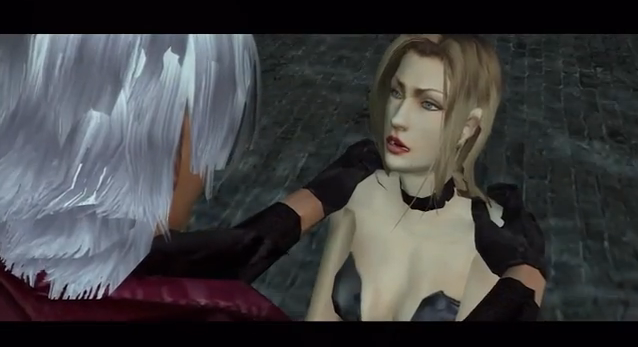 Like the original Resident Evil, parts of Devil May Cry make it feel that the game's cheesiness is intentional, but the writing and acting is so bad that it goes from intentionally corny to just kind of terrible and sometimes embarrassing. Resident Evil wouldn't perfect its self aware corniness until the fourth game, while Devil May Cry perfected it with its third (neither series has since done better than these installments in this regard.) While the Dante of Devil May Cry 3 and 4 is a fun, goofy dummy, he's actually quite dull in the first two games of the series. His Cool Guy Attitude and constant droppings of "whatever" are more boring than funny, and most of the game's cutscenes aren't very exciting as a result. The rest of the cast isn't any better.

Gameplay revolves around forming combos using Dante's swords and guns. Different moves can be executed based on how long you hold attack buttons, how much delay you allow between button presses, and directions held while attacking, making the battle system feel more like a true fighting game than an old-school beat em up. Players are ranked with a Stylish Meter that goes up as they fight waves of enemies without taking damage while mixing up the attacks used. Higher style means more Red Orbs, the game's currency. It's a fun system that tries to force you to use variety in your combos, but players that don't care about their Style rank will likely just settle into one or two combos that work and stick with them the whole game. Players can also tap L1 to switch into Devil Trigger mode, in which Dante does massively higher damage, recovers health, and gets new abilities. In this first game, Devil Trigger feels a little overpowered, as it doesn't take long to build the meter required to use it and the damage boost is so huge. 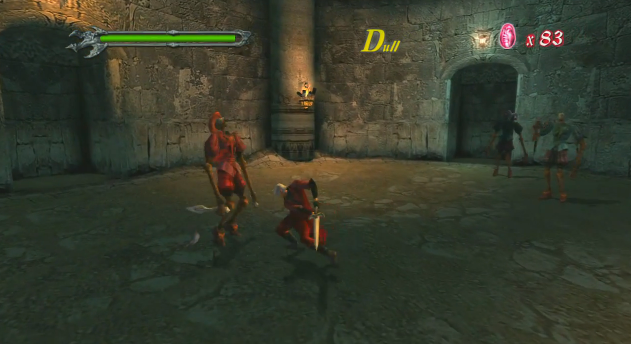 While the game's combat is decent, most of the enemies you encounter outside of boss fights are fairly bland cannon fodder that only provide a threat in large numbers or on higher difficulty levels. The game's best parts are its boss fights, which are both difficult and fun but have their own problems, the biggest being that several bosses are fought multiple times over the course of the game instead of giving the player more variety. The game's continue system is also needlessly punishing, prolonging the game needlessly. Players can use Yellow Orbs to continue after dying, or start an entire stage over. These orbs are rare and expensive, and since the bosses all require learning their patterns to survive, if you don't know what you're doing you're going to redo a lot of overly repetitive stages in their entirety far too many times. It wasn't until the Special Edition re-release of the third game that the series abandoned this stupid, stupid concept, though it's less of an issue in the far easier (though far duller) Devil May Cry 2.

The continue system and boring writing aren't Devil May Cry's only problems. The game uses fixed camera angles which lead to some really nice looking views, but often get players stuck in bad situations. It's very easy to be hit by enemies because of the camera suddenly switching to a new angle, and some of the angles make combat more difficult than it needs to be. It's also obnoxious in the game's few platforming sequences, which are all terrible and really have no place in the game. There are also a few out of place, completely unfun (but short and easy, at least) underwater sequences viewed in first person. The game also becomes an on-rails shooter for a little while towards the end and it's not a bad scene but it doesn't play particularly well. The result is a game that feels very, very rough around the edges and is hard to recommend to new players, even if its importance to the genre cannot be undersold. 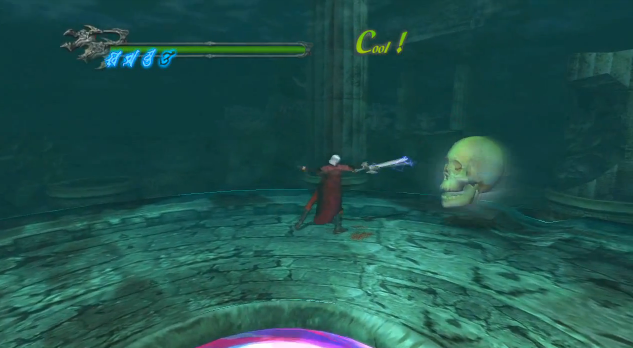 I recently replayed the HD Collection version of this game, which looks fantastic for the most part. Everything is scaled up nicely and looks very smooth, outside of cutscenes, which are shown in their original PS2 resolution. As a result, these cutscenes are muddy, blurry, and unpleasant to look at. The HD Collection versions of DMC2 and 3 have the same problem, though to a lesser degree, presumably due to better video compression being used in those games originally. Another weird problem that I can't recall being present in the original version (someone correct me if I'm wrong) is that the game's subtitles only appear on certain characters, and the sound mixing is so poor that it's sometimes hard to hear Dante's dialogue over the background music. 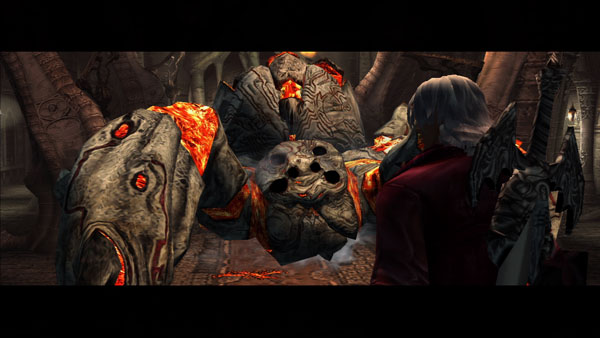 The HD Collection can be found for $10-15 on PS3 and Xbox 360. The third game is really the only one of the original trilogy I can still recommend today, and even it has its problems, though it's a massive step up from the first two games. My overall favorite game in the series is Devil May Cry 4, but Kamiya's own Bayonetta takes everything that this series tries to do and does it so much better in every possible way that it's really hard to go back. Though very important historically, and still quite fun in some spots, the first Devil May Cry just feels too clunky for me now to really enjoy it.
Posted by surlaw at 7:24 PM