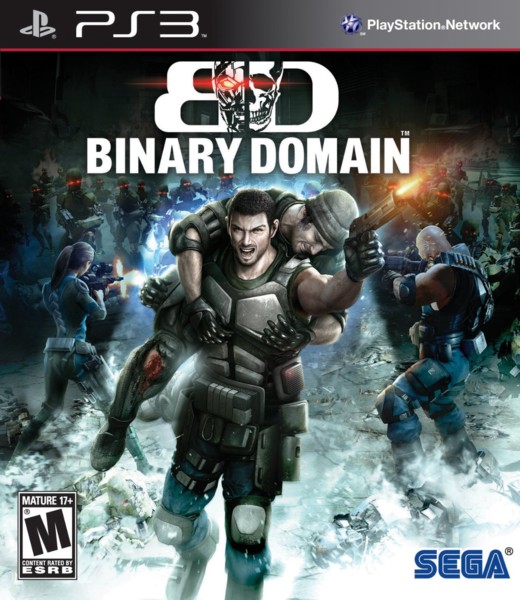 Binary Domain is a third person shooter created by Toshihiro Nagoshi, best known as the father of the Yakuza series. Released worldwide in February 2012, Binary Domain feels like an expansion and refinement of the gunplay found in 2011's Yakuza: Dead Souls, though Dead Souls wasn't released outside of Japan until after Binary Domain was already out everywhere else. Like the Yakuza games, Binary Domain is character-driven narrative with a lot of time spent in cutscenes or conversing with your partners, but its gameplay is pure third-person shooter with arcade-style stage progression rather than Yakuza's open world dude punching. While it is a massive improvement over the gameplay of Dead Souls, Binary Domain lacks the heart that makes the Yakuza games so endearing, while also feeling downright primitive compared to Japan's best robot-based shooter, Platinum's Vanquish.

Binary Domain's combat controls well enough, but doesn't offer anything new. It's a very standard cover-based shooter with a few huge, fun to fight bosses. Regular enemies come in waves and, since everything you fight is robotic, tend to be quite durable; hitting an enemy in the head doesn't kill it, but rather, confuses its sensors, causing it to open fire on its allies. There's a lot of focus on hitting individual robot parts, but ultimately, most of the things you fight are damage-sponges that take way too long to take down. There are weapon upgrades and equipment available that modify your stats, but the combat is very much basic, by the numbers third-person shooting, for all the good and bad that comes with it. 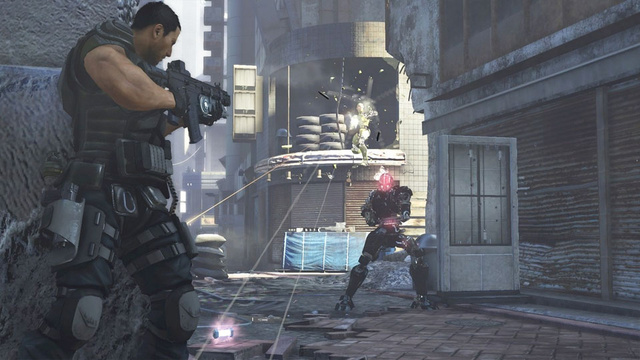 Conversations between squadmates play a big role in character development and in determining your ending. Keeping everyone happy is essential to keeping them all alive, and both the commands you issue in battle and dialogue choices you pick between combat sessions determine their attitudes. Commands can be issued either by button presses or by voice commands if you have a headset. This is a fun system, but easy to screw up since some of the choices are written very poorly and you'll sometimes make your character say the opposite of what you think you picked. Squadmates also have a tendency to wander into your line of fire mid-combat, lowering their overall morale.

The game opens roughly 70 years in our future, in a world where global warming has caused sea level changes and massive destruction to coastal cities. Governments of the world scrambled to repair the damage, building new cities on top of the dead ones a la Futurama's New New York. Robots were invented and deployed on large scales to complete work too dangerous for humans, and soon became a part of everyday life. Like most sci-fi involving robots, the ones in Binary Domain eventually come into violent conflict with humans. This story's conflict comes in the form of Hollow Children, robots designed to pass perfectly for humans who often don't even realize they aren't human themselves. International law has made such robots illegal, and part of the job of Rust Crews led by player character Dan Marshall is to hunt down and terminate these machines. A massive Japanese robotics corporation is rumored to be producing Hollow Children, and Dan and his company are sent in to a walled-off Tokyo to find the Amada Corporation's CEO. Japanese defense robots (non human ones) show up to slow him down. 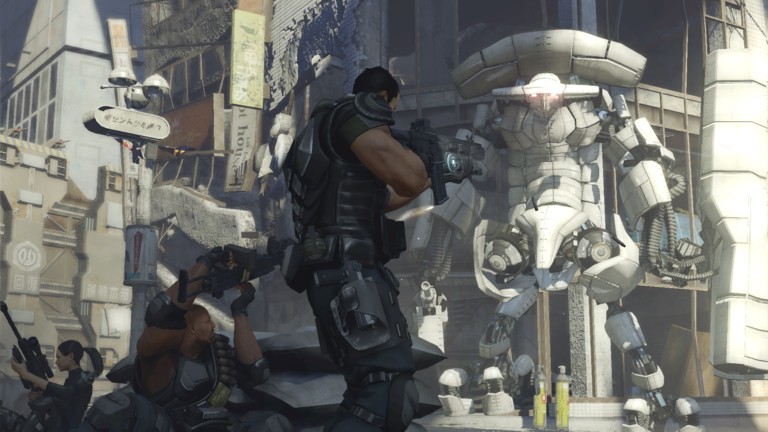 Dan looks like a generic Video Game Soldier; he's a macho white guy with short brown hair and plenty of muscle. While Binary Domain doesn't spend much time satirizing this cliche, it does give him a thoroughly unlikable personality that I didn't expect from such a bland design. While he's still ultimately the hero, Dan embarrasses his squad mates with his machismo, often survives by blind luck, and has the most toxic, resentful attitude towards artificial lifeforms of anyone in the game. It's no surprise that he eventually learns "Robots can be ok too. Sometimes." but it's still tough to get used to playing a character who's so openly racist, if that's the right word for his anti-robot discrimination.

Later in the game, one of the military brass says that they've got to get rid of the Hollow Children because the last thing the world needs is another fight over civil rights. Dan, the military's attitude, and the aggressively xenophobic portrayal of Japan creates a game that really wants to say something about race and race relations, but isn't well-written enough to make a very meaningful statement. There's plenty of racial harmony among the human members of your squad, a handful of characters with a decent variety of ethnic backgrounds, so the implication is that persecution will live on even if discrimination over skin tone goes away, which is certainly true but not particularly insightful. The one robot your team reluctantly accepts is Cain, a French combat unit with a jovial attitude and wonderfully thick accent. Cain dresses and acts more human than most robots, but is still very distinctly not human, perhaps as an uncanny valley commentary; the people in this world can accept Cain as long as he doesn't appear TOO human. Cain's a lot of fun to have around and is a welcome change from dreary, kill-all-humans robots that show up in lots of games. He's by far the most interesting character in the game. 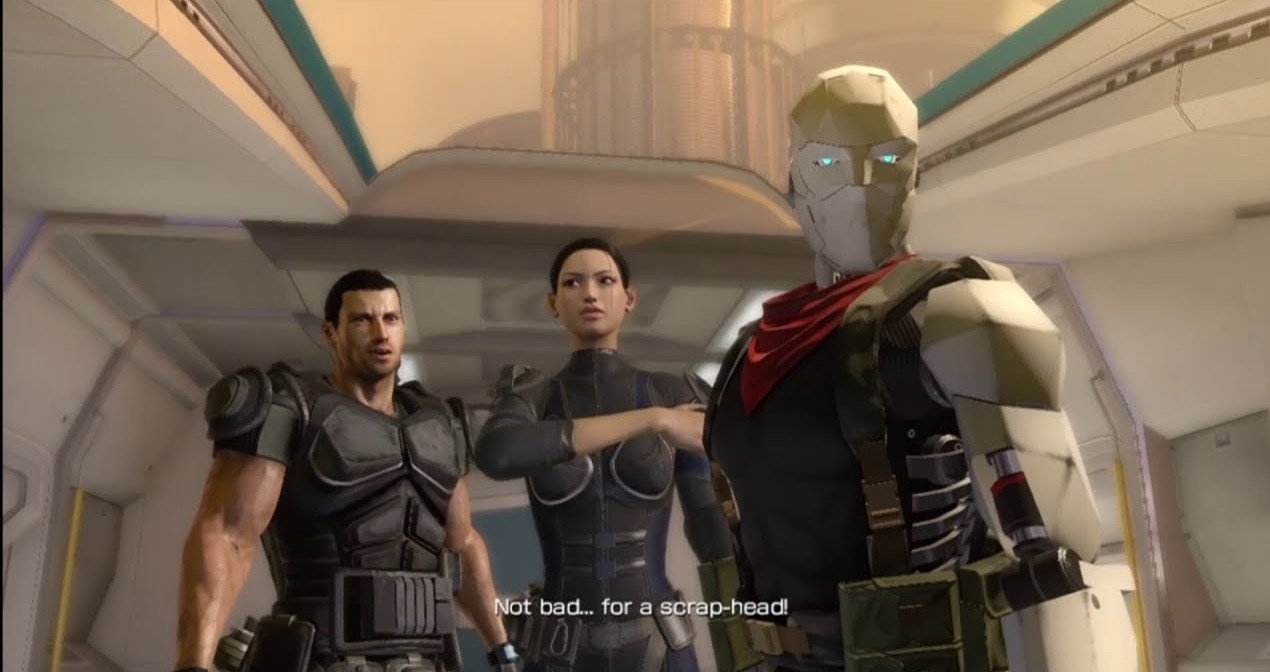 While the idea of humans who don't know they're actually robots certainly wasn't a brand new idea at the time, Binary Domain's execution of the concept feels startlingly similar to the 2004 reboot of Battlestar Galactica. Major spoilers for the ending of Binary Domain and the first season of Battlestar, highlight to read: It's revealed late in the game that Faye, one of Dan's lieutenants, is actually a Hollow Child. She's unaware of her true nature, and by all possible tests is 100% human. Through this revelation, Dan eventually learns to move beyond his prejudices and fall in love with her. The pairing of Dan and Faye as a white man with short brown hair and an Asian woman with long black hair is visually parallel to Battlestar's Karl Agathon and Sharon Valerii, another human soldier and unknowning robot pairing. The presentation of the Hollow Children bear more than a passing resemblance to Galactica's organic Cylons, and the ultimate destiny in both stories is that hybrid children of humans and machines will be born, paving the way for a new future for both races. On top of that, Cain is the name of a major Battlestar character (though our friendly robot has no personality in common with the show's Admiral Cain) and Amada's name is a little too close to Adama's. I think these parallels are pretty fun, and I don't fault the game for taking inspiration from the show.

Overall, Binary Domain is a serviceable game with good art design, high concepts, and thoroughly average execution. Aside from enemy robots taking too much damage before exploding, I've got no specific beef with its gameplay, but no specific praise either. The story is ambitious, but not strong enough to carry its own weight. I would recommend giving this game a chance if you're not burned out on shooters, but it's a very solid middle-ground title and not up to the same standards as Nagoshi's Yakuza games. It's available as a digital title on PSN today for $20, which is a reasonable price for what you get.
Posted by surlaw at 9:17 PM