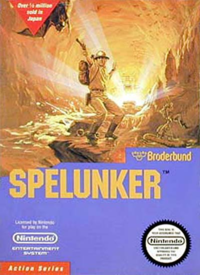 Originally released on the Atari in 1983, Tim Martin's Spelunker is famous for being a bad, unreasonably hard game, even by the standards of the time. I first became familiar with the series via Irem's 2009 remake on the PS3, Spelunker HD. Spelunker HD was very difficult and had gameplay mechanics unlike anything else I was familiar with, but I completely fell for it, with it quickly becoming one of my favorite Playstation Network titles. I heard that the original version was much worse, but I'd never had a chance to check it out until recently, when the NES version of the original game showed up on the 3DS Virtual Console. As it turns out, it's still a pretty great game, even in this much more primitive form, but it's so short that it feels like a demo in comparison to Spelunker HD.

Spelunker is a platformer with a focus on careful, extremely slow progression, all while your cave exploring hero's air supply slowly drains. Every step matters; this isn't a typical platforming game where you can smoothly run from one end of a stage to another. In a surprisingly realistic twist, falling from a height of more than your character's knees kills you; after all, you're carrying loads of explosives, treasure, and mining equipment. Spraining your ankle underground, alone in the dark, with all this stuff on your back really would be a death sentence for most people. A real person probably wouldn't die from being pooped on by a bat, though, which is one of this game's other biggest hazards. Rounding out the deadly falls and fearsome pooping bats are wandering ghosts with great theme music who can be exorcised at the expense of using your air supply to power an air-gun. There's some great risk/reward here, where players must decide whether to stand and fight and risk running out of air or make a run for it, hoping to get to a resupply station before they get ghost gobbled. 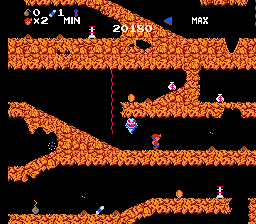 I love action games where every single step matters. If you're going to take a jump, you'd better be 100% sure of yourself (much like the NES Castlevanias, there is zero air control once you've jumped.) If you're going to run, you'd better watch the ground beneath you the entire way. If you see treasure out of reach, you have to ask whether it's even worth the risk of trying to get to. In a lot of ways, Spelunker feels like the platforming predecessor of From Software's Souls series. Every little thing can and will kill you, and you have to have enormous patience if you're going to make any progress, but once you have the obtuse mechanics down, it begins to feel completely natural. There are very few cheap deaths in Souls or Spelunker for careful players, with one exception: It's very easy to fall off of Spelunker's ropes and ladders while attempting to jump, since you need to perfectly press your direction and the jump button at the same time. The HD remake addresses this one part of the game that's actually pretty bad by allowing you to turn on a safer climbing option that affects neither your score nor any trophies. Aside from the problem with the ropes, there are only two or three really awful, pixel-perfect jumps that are very easy to screw up even if you're careful

Aside from platforming and rope climbing, players can drop bombs to blow up rocks (but don't stand too close to the blast) and fire flares to briefly scare off bats (but don't touch the flare as it descents from above.) Geysers and one water hazard also show up to trip up any unsuspecting spelunkers. The HD version features far more enemies, terrains, and hazards, so what's here works but feels pretty meager in comparison. 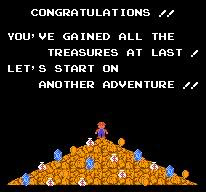 The graphics are simple but nice. You can tell what everything is, it's easy to judge distances once you get used to the game's unusual physics, and it's easy to spot traps once you've been hit by one once. The music is catchy and memorable, especially when there's a ghost on the scene. Once you complete the game, you can begin again with new color schemes and challenges, but the majority of the game remains the same (the way you pick up keys to progress changes on each sequential playthrough.)

The single biggest flaw in the NES version of Spelunker is that there are only five stages to explore, or more specifically one large cave divided into five areas. Spelunker HD, on the other hand, offers 100 levels across 10 caves, with 100 more available as DLC, and every one of those levels contains secrets to find. The NES version feels tiny in comparison, since replaying the same levels with invisible keys isn't a whole lot of fun. With so many more stages, enemy types, secrets, and a pretty fun multiplayer mode (both cooperative and competitive) there's no real reason to buy the original Spelunker if the HD version is an option, outside of historical curiosity. As a huge fan of Spelunker HD I was very glad to try out the original, and it's nice to have it always available on a handheld system, but while I still think it's a good game it's very hard to recommend it when such a superior remake exists.
Posted by surlaw at 11:44 PM