This is the first review in a series focused on games I spent time with during my most recent trip to Funspot. Be sure to request games for me to cover the next time I go!

Released by Epos in 1983, The Glob (alternately titled Super Glob) is an obscure maze game that runs off of converted Pac-Man hardware. Players control a hungry blue blob monster as it avoids legions of blob-biting rabbits, frogs, pigs, alligators, and apes. As with many maze games, the objective is to eat all of the food on screen, which in this game is actual food instead of just dots. Rather than navigating a top-down maze as in Pac-Man, The Glob is viewed from a side scrolling perspective and focuses on using elevators to move from floor to floor in some sort of hog infested post-apocalyptic supermarket. 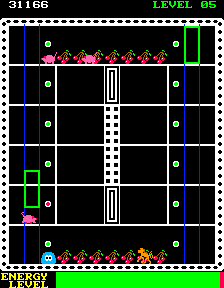 The Glob has two abilities: The power to ooze an appendage out of its head to press elevator call buttons, and the ability to jump up and stick to ceilings, both avoiding enemies and allowing Glob to drop down on them to defeat them. The elevators are used to get from floor to floor, but can also be used to squish enemies. To add to the challenge, certain enemy types will use the elevators as well, leaving you at risk of both getting stuck without an elevator when you really need one and of getting squished by an elevator riding rabbit. There is also an energy meter which serves as the stage's timer.

There are apparently 24 levels to this game, though I've yet to progress further than level 6. The difficulty comes not from clever AI or tricky mazes, but from sheer speed. While things start out manageable, by level 4 the game's speed (of everything; The Glob, enemies and elevators) ramps up so significantly that enemies get much harder to follow, making the game quite challenging. This isn't the best manner of increasing difficulty, and the curve is rather steep, but it's effective enough to make me keep trying. 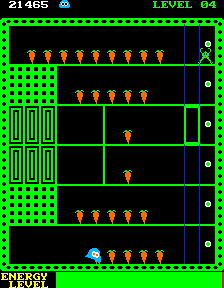 I've never seen one of these machines outside of Funspot. In fact, I'd never heard of this game at all prior to playing it there. From what I've researched, it's not very well known or popular, but I actually think it's a lot of fun. The music and sound effects are pretty grating, but the art style is nice and colorful and the blob's bouncy animation is cute. I do think it gets too hard way too soon, but that sort of thing isn't exactly uncommon in lesser known arcade games of the era. This isn't a game that's ever been released on a home system anywhere, so your only options for checking it out are through emulation or finding an actual machine, but if you do get a chance to play it I'd definitely recommend giving it a shot.
Posted by surlaw at 10:12 PM