Atari's 1983 Star Wars game is the first of several arcade Star Wars titles the company would develop during the 80's. It is a first-person vector-graphics shooter that puts players in the role of Luke Skywalker during his assault on the Death Star in the original Star Wars film, in spite of the game being released after Return of the Jedi had already come out in theaters. Atari would follow this game up a year later, out of sequence with the films, with an arcade game based on Return of the Jedi that used pixel art and an isometric view. They would return to the simple vector style displayed in the first game for their third Star Wars arcade title, based on The Empire Strikes Back.


Sega would take over the Star Wars reins in 1993 with their own game entitled Star Wars Arcade, a game inspired by Atari's original but with more modern design and art. 1998 would see a second Sega title, Star Wars Trilogy Arcade, that further refined the concept and became so popular that I still see these machines in movie theaters 15 years later. Their next title, the 2000 Star Wars Racer Arcade, would also prove very popular, but would be the final Sega-produced Star Wars game (and as of this review, the final Star Wars arcade game overall.) While there have been some pretty bad Star Wars console games, including clunky ports of some of these arcade titles, the arcade games themselves are all quality games. 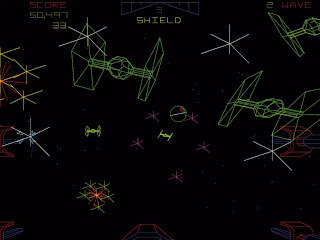 Star Wars 1983 is divided into three sections. In the first, Luke pilots his X-wing towards the Death Star, shooting down TIE Fighters and avoiding glowing balls of fire. In the second, the X-wing flies over the surface of the Death Star, with towers rising up and firing. The final segment involves running through the Death Star trench, avoiding enemy fire and low hanging beams, and ultimately blowing it up. Afterward, the sequence repeats indefinitely (Robert Mruczek has played the game for over 48 hours in one session). I'm sure there's a Wookieepedia article explaining how in some version of the Star Wars canon, there really were infinite Death Stars.

Players have a fair amount of control over the X-wing's movement in spite of the game being on rails. It's a solid precursor to games like Star Fox, and I actually find Star Wars '83 smoother to play today. Your X-wing can survive six hits on default settings and can gain more shields as you progress. Shooting down enemy fireballs (it's weird using this term for Star Wars laser beams, but they're what the game uses) is essential to surviving. Players can choose their starting difficulty level, which is always nice in arcade games and fairly uncommon. 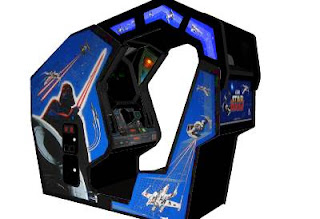 The actual machine comes in two flavors; a standard model, and a cockpit style model similar to Sega's 1982 Star Trek arcade game. Funspot has a cockpit model and it feels great to play on. Even though the graphics are so simple, they're still immediately recognizable (far more so than Sega's Trek) and the voice clips from the film's characters are a great addition. The cockpit setup adds even more to its immersion, making the game quite a lot of fun. There are home ports on older systems and a version of this game appears in Rogue Squadron III on Gamecube, but there's really nothing like playing it sitting in an actual fake X-wing seat. Well worth checking out if you ever get a chance to, but even if you play it in a more basic setting, this is still a great game that's aged very well.
Posted by surlaw at 10:59 PM