Jetstream is the second piece of DLC released for Metal Gear Rising: Revengeance. While the previous DLC simply added another batch of Virtual Reality missions, Jetstream actually provides new story content, telling players how Samuel "Jetstream Sam" Rodrigues came to be employed by the Desperado PMC. Sam plays differently enough from Raiden to make combat feel fresh, but unfortunately, the majority of the DLC feels like a rehash.

I knew going in that this DLC was meant as a prequel chapter to Revengeance, but I expected it to go back a little further. In the main game, we get hints about a drug cartel that Sam demolished in Brazil, establishing him as one of the world's top soldiers. I was expecting things to start there and lead up to his involvement with Desperado, and the DLC's large 2.5 gigabyte filesize suggested something with a decent amount of meat. I'm absolutely confused as to how the file was so big, since there are only a few minutes of cutscenes, very little new dialogue, and no new areas. Every enemy, location, song, and boss fight is taken from the main game. Everything is remixed a little, so it's not entirely rehash, but it's still way too familiar to someone who's played through the main game a couple of times already.

The content here isn't bad by any means. Sam controls similarly to Raiden, but with a few additions. He has a pure dodge command, performed by pressing Square + X, can double jump, and can air dash. Most importantly, he has a taunt button that sends enemies into a rage, increasing their strength and aggression but massively lowering their defense. Taunting and dodging are critical to survival here, which is very appropriate for such a smug character. Sam has fewer direct attacks, but his movement style is fun enough that it doesn't matter much. He's a lot of fun to play as, and it would have been nice to have the option to use him in the main story mode once the DLC was complete. 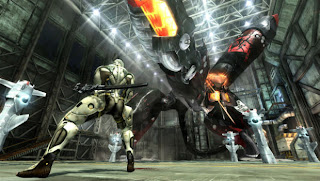 When I first played Revengeance on Normal difficulty, I was actually surprised at how easy I found it. Raiden's moves and parries trivialized a lot of enemies, and you had a nearly endless supply of recovery items. I'm happy to say that the Jetstream DLC is significantly harder. You don't get to upgrade your weapons, enemies are far more aggressive, and Sam's taunts make for a solid risk/reward system. While the three bosses you fight are all taken from the main game, their pumped up aggression really makes a big difference. Hard mode in this DLC was much harder for me than Very Hard was in the main game, especially the final boss, who does get some new, very punishing moves even though he's a returning character. The only problem here is that the more aggressive enemies are more likely to corner you, calling attention to the game's poor camera system. 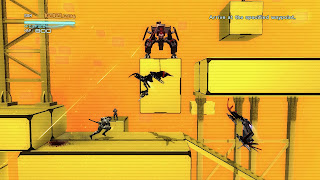 Even though Sam feels great to play, the combat's challenging, and the few cutscenes present are fun, I still felt pretty underwhelmed in the end. There are a few health/stamina upgrades to find, five concept arts to unlock, and five VR missions to find, which, weirdly, must be played during the DLC's story rather than selected from a menu. Other than that, I'm not aware of anything to unlock, which makes me less interested in replaying on higher difficulties right away. This content cost $10, but only took me about an hour and a half to complete, including cutscenes and time spent exploring. For that much, and for the file size, I really expected a little more story, a few things to unlock, and at the very least new costumes to give Sam. None of the content here is bad, but it doesn't feel new enough to really deserve this price tag. However, if you're the kind of player interested in S ranking every fight and perfecting the bosses, you'll spend a lot more time playing this than I did.

Ultimately, everything here feels like it should have been part of the original game to begin with, rather than a full-featured expansion. Here's hoping the Blade Wolf DLC offers something a little more substantial, though at this point I'm hesitant to buy it at release.
Posted by surlaw at 11:37 PM