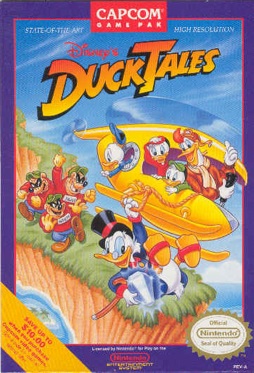 DuckTales, based on the Disney cartoon of the same name, is one of my favorite NES platformers. I was a big fan of both the show and the game in the early 90's, and the recent announcement of an HD remake by Wayforward definitely has me hyped. With Contra 4, A Boy and His Blob 2009, and Double Dragon Neon, Wayforward has proven their talent for taking on passion projects to revive classic titles, and DuckTales Remastered looks to continue that trend. In anticipation of the remake, I decided to take a run through the original game for the first time in years.

I am pleased to say that DuckTales has held up considerably well. As far as tightness of control and smart stage design goes, it's absolutely up there with the Super Mario and Mega Man NES games. DuckTales and the Mega Man series actually share a few key staffers, including Mega Man creator Keiji Inafune. Once you learn the game, DuckTales is far shorter and easier than a Mega Man game, but they absolutely have a lot in common. Many graphics and sounds could easily be interchanged between DuckTales and any given Mega Man and the physics are pretty close. DuckTales also features non-linear stage selection and multiple paths per stage, again making it feel closer to a Mega Man title than other NES platformers at the time. The soundtrack is also Grade A 90's Capcom music. 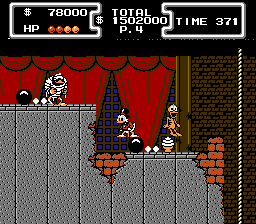 DuckTales focuses on Scrooge McDuck doing what he does best; getting disgustingly rich and smacking down jerks with his cane. There are numerous gems and hidden treasures to collect throughout the game, and collecting a sum greater than $10,000,000 earns players a special ending. It takes a lot more skill to finish the game with $0, which has its own special ending, since it's very easy to accidentally pick up some cash. As in Wario Land, greed is good, though Scrooge learns about the power of friendship along the way too. Unlike Wario Land, DuckTales has great stage design that makes digging for secrets actually rewarding.

Scrooge has two methods of dealing with the robbers, skeleton monsters, and blob things that plague his quest for cash: First, he can use his cane as a pogo stick by holding down and B while in the air, bouncing off enemies and hazards. Second, he can stand next to certain blocks, wind up his cane like a golf club, and send those blocks sailing into his foes. The golf swing is used more often for specific puzzles than for combat, since the pogo move generally does everything you need. Between Scrooge, Commander Keen, and Soul Calibur's Yoshimitsu, I'm pretty sure the best heroes all pogo.

Each of the five stages has its own unique theme and feel. The Transylvania stage is the most maze like, employing secret passages and mirrors to warp from place to place. It's the most memorable stage not only because it's well designed, but unfortunately because you have to play through it partially once and entirely twice. It's a nice looking level with a very Castlevania feel to it, but having to replay it instead of a unique final stage is a let down, even if the boss changes. My personal favorite is the Moon stage, which forces players to find specific items within a UFO before they can progress. The only stage design element I dislike is that in the African Mines, Scrooge manages to instantly die when he falls into water, in spite of the whole "being a duck" thing. 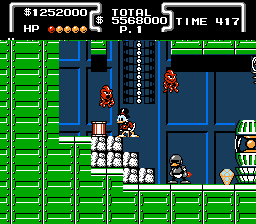 While fun, none of the bosses are particularly difficult. The most difficult platforming bits in each stage are generally reserved for paths to secret items and there are none that are horribly unforgiving. There are no continues, so the game may seem daunting at first if you keep seeing the Game Over screen while trying to learn the basics, but once you've got a good handle on how things work, the difficulty is perfectly fair. There is an Easy Mode that can be selected that gives you twice as much health but as far as I know makes no other major changes.

DuckTales is commonly criticized for its length, but  I'd rather have a good game that only lasts an hour and makes almost every minute count than one that drags things out to four hours through tedium. I'd certainly be happy to have more of the same here, which is one of the big reasons I'm looking forward to the remake, but I don't think there's anything inherently wrong with a game being this length. If I did, I wouldn't love Super Mario Land or Kirby's Dream Land. There's no nostalgia blindness here; the game was just as fun to me today as it was almost 20 years ago. DuckTales has some of the most entertaining mechanics and atmosphere of the 8-bit platforming genre, and I can't recommend it more heavily. Let's see what you can do with it, Wayforward!
Posted by surlaw at 5:50 PM