When I first saw screenshots and videos of Double Dragon Neon months ago, I was pretty apprehensive. It looked clunky and ugly in a way that developer WayForward's games never do, and I was surprised they went with 3D models instead of their usual gorgeous pixel art. I am happy to say that my fears were completely unfounded and that Double Dragon Neon is possibly the best arcade style beat em up I've played. Between this game, Contra 4, and A Boy and his Blob, I hope WayForward continues reviving 80's franchises, because there's no one in the games industry who does it better.


I'll admit that when it comes to the original games, I'm not the biggest Double Dragon fan. I played the first and third NES games, the arcade version of the original, and some of Super Double Dragon, but aside from the original game, they didn't do much for me. I've got very strong memories of playing and hating Double Dragon III: The Sacred Stones when it first came out on the NES. In fact, it's probably one of my earliest memories of playing a game and thinking "This is completely terrible." When it comes to beat em ups, I always preferred the TMNT games, Final Fight, River City Ransom, and the Streets of Rage series, so you can imagine my surprise when I downloaded a new Double Dragon game and honestly felt that it was better than any of these classics. 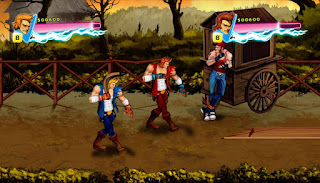 The graphics look much better than they did in early screenshots and the animation is top notch. It's incredibly smooth, all of the characters have a ton of personality, and the gaudy neon pink lighting that fills several stages of the game's world is perfect for the cheesy Saturday morning cartoon style they're going for. Props to WayForward for not shoveling in needless blood to a game that absolutely doesn't need it. The music fits perfectly as well, including remixes of classic Double Dragon tunes as well as tributes to the musical styles of the 80's. The entire soundtrack, composed by Jake Kaufman, is available for download here at whatever price you like.

As Double Dragon games usually do, Neon opens with thugs kidnapping Marian, girlfriend of martial arts hero Billy Lee. Together with his brother Jimmy, Billy fights through ten stages of punks, robots, and monsters in his quest to save Marian from Skullmageddon, a classy Skeletor knock-off who absolutely loves his bone puns. Skullmageddon is one of the funniest video game enemies in recent memory, and I seriously hope we get a sequel where he comes back for revenge. Skullmageddon also has quite an array of lieutenants, including a Little Shop of Horrors parody, a Not-Mega Man straight out of the bad/amazing inaccurate box arts of the 80's, and, of course, plenty of Abobos. 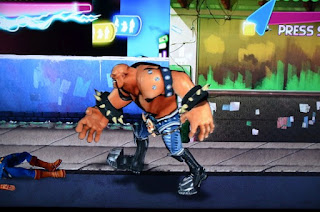 On the surface, Double Dragon Neon looks like it plays as a typical beat em up; wander across a stage punching, kicking, and jumping around through waves of enemies until you reach a boss. This kind of game is usually a ton of fun with a buddy, but Double Dragon Neon actually changes things up enough to be extremely fun even when played solo. Like the great River City Ransom before it, Neon allows you to find and buy items (in the form of Mix Tapes!) to upgrade your character, turning you from just another chump to, eventually, a dude who can knock out a skeleton-monster in a single kick. All upgrades carry over between playthroughs and across difficulty levels, which is pretty essential if you're going to take on the game's hardest difficulty. The most important addition is that of a rolling dodge move, which gives you a second of invulnerability and if timed properly activates The Gleam, putting you in a state where your attacks temporarily do significantly more damage.

This game seems very difficult at first, but once you master dodging and countering, it becomes much easier and a ton of fun as long as you pay attention to what's going on. This is not just another button mashing beat em up. I felt that this game asked for more from me than the genre typically does, and I really appreciate that. I actually haven't had a chance to play this game cooperatively yet, and in spite of that, it has still completely won me over. The game's co-op mode (called bro-op here) also allows you to power up/psych out your buddy by using high fives, to which the right analog stick is entirely devoted to. Between the high five stick here and the hug button in A Boy and His Blob, WayForward's the best at button mapping that adds to the character of a game in a way that few companies do.

My only negative points with this game are very minor ones. I wish there were captions available for dialogue, because it's sometimes hard to hear everything a boss says. I wish there was an option to run by double tapping forward instead of holding R2. I definitely wish there was online co-op. I definitely like Abobo's design here, but it's not as perfect as his original, boulder-headed one. There is nothing I'd change about the core gameplay, its style, or its tone. Well, maybe I'd tone down the Chinese shop keeper a bit.

Judging from my own experience and from the leaderboards, the game's 10 stages will take you at least two hours to clear your first time through, and possibly a lot more than that if you replay stages to power up or if you continue a lot. Don't listen to IGN's terrible review that calls the game an hour long; my second playthrough took an hour, but it was because my character was so pumped up with power ups from my first time through. My third and fourth playthroughs, on Dragon and Double Dragon difficulties respectively, took around two hours a piece. Once my beat em up buddy is around to play, I'm sure that will be another hour or two, and for $10, that seems like plenty of content to me.

In a lot of ways, from its humor to its emphasis on dodging to its surface simple/technically complex fighting to its review score on IGN, Double Dragon Neon is the God Hand of side scrolling beat em ups. While God Hand perfected the genre in 3D, Neon perfects the 2D version. The two games, both absolutely fantastic, serve as great counterparts to one another. They're not for players that want a simple, pump quarters into it until you win beat em up, but if you're willing to put a little time into learning them, they're both perfect games that reward skill in a way the genre often fails to. I can't recommend this game heavily enough to fans of the genre and to people who like comedy in their games. Part of me can't wait to see what flagging franchise WayForward takes on next; the other part of me just wants a second Double Dragon Neon. 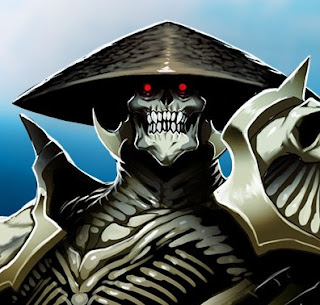