Bird & Beans is a collection of two slightly retouched games originally released as unlockable bonuses in 2003's WarioWare, Inc.: Mega Microgame$! Minigames for the Game Boy Advance. The gameplay of the original games, Pyoro and Pyoro 2, is intact, but the games now feature a wider playing field. Both titles are fun little arcade style games that are great in five minute bursts, and being able to download both on the DSi and 3DS for $2 is a decent deal. The biggest problem is that this is a score based game, but only one high score is saved per game and you aren't even allowed to enter your initials.

In Bird & Beans/Pyoro, players control a small red bird with an frightfully long frog's tongue and a ceaseless hunger on his quest to eat everything. Beans fall from the sky, slowly at first but growing faster as time passes, and players earn points by aiming their tongue and snatching them out of the air. The further from the ground a bean is, the more points it's worth. If a bean hits the ground, that bit of ground becomes impassable. By consuming white or flashing beans, players restore one or more pieces of broken ground. 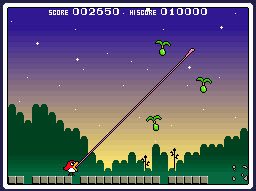 Bird & Beans 2/Pyoro 2 has a similar premise, but puts players in control of a more destructive yellow bird instead. In this game the objective is to gun down the beans by spitting seeds at them rather than catching them. Yellow Pyoro is rude and kind of gross. 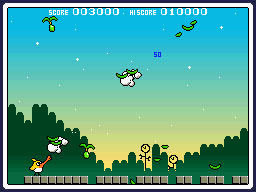 If I've learned nothing else about selling cheap casual games it's that cute round birds tend to mean big green dollars. Pyoro as a character never caught on the way those Angry Birds did, but he's got a lot of charm of his own, and has appeared in most of the modern Wario games in the form of unlockable minigames. I like him. He's a feathery Yoshi with less annoying sound effects who always has a jazzy beat playing wherever he goes. If you like both birds and beans, you'll like this game. If you like birds and absolutely hate beans, you'll like the second half of it. If you don't like birds at all then you should probably avoid this one at all costs! 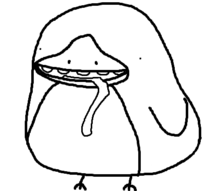