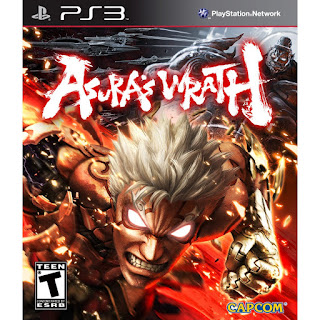 Asura's Wrath is an experimental game by Capcom and CyberConnect2 that perfectly blends playing a video game and watching television. This title, which takes inspiration from and liberties with Hindu, Buddhist, and other mythologies, puts the player in control for well less than half of its approximately ten hour run time (including a few downloadable chapters.) Unlike other recent popular interactive movies such as The Walking Dead and Heavy Rain, Asura's Wrath is less Hollywood and more anime, in both content and structure.

Each of Asura's 18 base episodes open with credits scrolling over the action, have mid-show bumpers where commercials would go, and end with "Next time on Asura's Wrath" sequences. Unlike many interactive movies, Asura's Wrath foregoes adventure game sequences and focuses on pure, nonstop action. It's a combination that doesn't sound like it would work, but I was happy to be proven wrong; in spite of some missteps with how it was published, Asura's Wrath is a relentlessly insane joyride and there's really nothing else like it.

One thing that really sets Asura's Wrath apart from other interactive movies is that the gameplay sequences that ARE present are actually incredibly fun. While I loved The Walking Dead, its shooting sequences range from mediocre to bad and seem to only exist in order to fulfill a video game action quota in a game that would rather spend its time on dialogue. Asura's gameplay is divided into three parts. First, all cutscenes contain Quick Time Events, where players must quickly press buttons in response to on screen prompts. Plenty of games use QTEs terribly, but Asura's focus on them allows their appearance to feel more organic than usual, and on top of that, the buttons you press generally make sense. If your character is about to jump in a cutscene, you'll usually be prompted to quickly hit the jump button to do so. It feels logical and fun, and keeps you on your toes during already intense scenes. Second, some areas and most boss fights are played in a beat em up style, with players running around an arena using a variety of simple combos. Third, bigger set pieces often contain on-rail shooting sequences. Every one of these forms of gameplay is fun in Asura's Wrath. 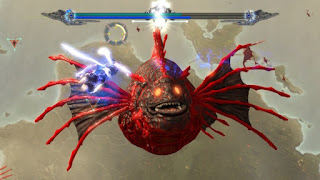 This game, unsurprisingly, stars a man named Asura and focuses on his wrath. The setting is the planet Gaea, watched over by the Eight Generals, including Asura, who fight an endless battle against the Gohma, large animals corrupted by impurity that run rampant across the land. Asura's daughter, Mithra, has the ability to channel soul energy, Mantra, to fight against the Gohma. Vlitra, an enormous animal that inhabits the center of the world, bursts forth periodically and needs to be subdued by the full power of Mantra to remain in check. After an enormous battle with Vlitra, Deus, the leader of the Generals, chooses to seize power from the world's emperor and frame Asura for his death. Asura is killed and Deus holds Mithra captive for use as a Mantra generator for the next 12,000 years. This is all just the opening episode of the game.

Asura rises from the dead after 12,000 years and seeks revenge on the generals, now known as the Seven Deities, as he fights to free his daughter from their grasp. Each of the Seven Deities has a strong, cartoonish personality that's usually a lot of fun to watch. Asura himself is a comically overblown ball of angry machismo, bulging with red muscles and an endless supply of limbs. As players control him, both in cutscenes and in brawling/shooting sections, Asura's Rage Meter grows until it hits a breaking point, at which time players can hit R2 to initiate a burst of anger, ending a fight. This is the only way to complete a boss battle, as bosses here don't have traditional life meters. It works very well and feels different enough to be fresh, even if the core fighting system is nothing new. 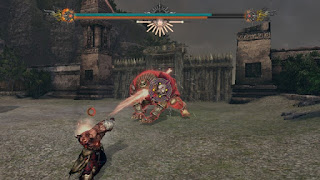 I absolutely loved this game's design, from its art style to its music to its cinematography. Video game cutscenes often fall flat when it comes to doing something visually interesting in a cinematic sense. Not all, of course; God of War's cutscenes have a great cinematic action movie flair and the Silent Hill series does a great job mimicking a more subdued film style, but often, games don't frame action in cutscenes in a way that's very compelling to watch. Pacing is usually off (Almost every Metal Gear game) or there's no care given to internal consistency of either plot or style (Heavy Rain.) Every cutscene in Asura's Wrath absolutely fits and pays service to the game as a whole.

The story is bombastic, ridiculous, and insane (at one point, a boss grows to the size of the planet and attempts to squash Asura with a finger poke) but it all fits together so well and is so genuine that its completely preposterous content works. It's the best absurd parts of Dragonball Z taken up a hundred notches but without any of the painful pacing issues. The music is also perfect, sometimes mimicking the now standard epic choral pieces that have become background noise in most set-piece heavy action games today, sometimes infusing an old west flavor with modern sound, and sometimes using existing music, such as a perfect use of Dvorak's New World Symphony, which is used in the game's high point, a duel on the moon. 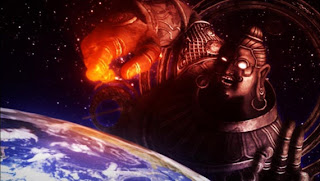 There are both loose and strong connections to actual mythologies throughout the game, and I feel like there's potential to offend if they're part of a player's cultural heritage, but taken on their own in this world that blends magic and sci-fi, everything really worked for me. Almost everything in the game except for the Gohma and the human civilians you encounter has mechanical qualities to it, and the world is very brightly colored. It looks absolutely great and feels like a world of its own in spite of the numerous references throughout. Dialogue and character development is flowery and ridiculous in a way that perfectly fits a world in which petty gods battle one another. The only character I found uncomfortable was General Sergei, a flamboyant gay stereotype with a love of cruelty. While his sexuality isn't mentioned in the story, his character absolutely feels like a messy, homophobic caricature that I didn't enjoy seeing. The rest of the cast was solid. There's also an obligatory Hot Springs episode that feels a little creepy, but parts of it are funny enough to overlook the bad parts.

I loved my whole run through Asura's Wrath and was absolutely hooked form the first episode. I can't praise the game wholesale, though, because of a pretty bad decision Capcom made about how to package it. The main game is divided into three parts, each consisting of six episodes. Episode 18 ends with a few plots left dangling, but otherwise presents a fairly satisfying ending to the game. After completing it, players are prompted to replay earlier chapters to get better rankings in order to play True Episode 18. I'd already met the requirements before getting there, but still had to replay the entirety of Episode 18 to get to the new content, which didn't appear until the very end. This is where the problem starts; True Episode 18 introduces a massive plot twist and ends the game with a To Be Continued screen that absolutely ends things in the middle of the action instead of setting up a sequel. The final four episodes were sold as downloadable content, as a $7 pack. Capcom seriously charged fans to see the game's real ending.

The content in the DLC chapter is very good stuff, but it's both unnecessary and offensive in the way it was sold separate from the main game. There was a very easy solution to this; DON'T include True Episode 18 in the regular game. Let the game end on Episode 18, which resolves perfectly fine. Sell the rest of the content as a "What if?" type story down the road, instead of promoting it as the game's actual ending. This would have annoyed me far less, as it would have made the new episodes feel more like an expansion than a requirement. Two side episodes were sold that tell players what happened between certain episodes, but I ignored these. I felt conflicted here, because I absolutely don't want to reward a company for this kind of awful DLC policy, but at the same time feel CyberConnect2 deserves money and recognition for making such a great game. 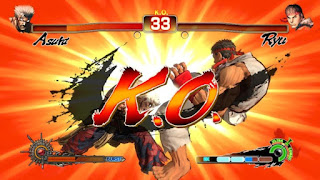 Two other Lost Episodes were released as DLC and these were handled much better. They are completely separate from the main story, and are a funny, ridiculous side story involving a Street Fighter's Ryu and Akuma coming to Gaea to punch Asura. The Ryu episode consists of both standard Asura's Wrath style gameplay and a couple of fights that are taken straight out of Street Fighter IV. You've got the standard SF4 announcer, health bars, super meter, and AI. While Asura still uses his regular controls, your opponent fights entirely in the SF4 style, which was both funny and very charming as a big SF4 fan. These chapters aren't worth it if you're not a Street Fighter nerd, but for me, they were absolutely great. The only problem is that the Akuma episode ends on a cliffhanger that will likely never be resolved. Still, at least it's not the main story.

There's a demo of this game available that contains two of its best moments, so check that out if you're curious. It does a very good job of encompassing just what this game is and is one of the better demos I've played. I passed on this game for a long while because while I loved the demo, I didn't feel like it would be worth $60 as a full game. Now that it's down to $20 or less, it's a much better deal. There's really nothing else like Asura's Wrath, and if you like loud dudes flexing and yelling at each other before punching each other so hard they fly to the moon, this game's for you.

Note: After writing this review, I came across a very informative article, A Buddhist's Guide to Asura's Wrath. Absolutely worth checking out, and doesn't go too much into spoiler territory.
Posted by surlaw at 11:30 PM