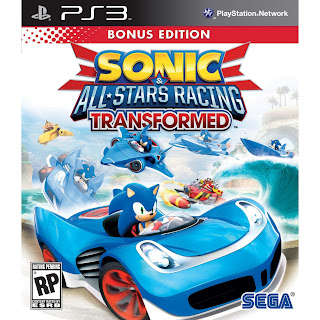 Sonic & All-Stars Racing Transformed is a poorly named sequel to 2010's Sonic & Sega All-Stars Racing. At its core, Sonic Transformed is a Mario Kart clone with a heavy dose of Sega nostalgia, focusing on many games throughout the company's history rather than just one. The "transformed" in the title refers to the fact that your kart can turn into a plane or a boat in the middle of certain stages, completely changing both how the vehicle handles and where you can go. The visuals are gorgeous, the callbacks to old Sega games are a lot of fun, and the soundtrack's great. In spite of all that, I actually didn't have much fun with this game.

All versions of Sonic Transformed include the same cast of 24 characters originating from the Master System to the Dreamcast, and include two guest characters, Disney's Wreck-It Ralph and real life racer Danica Patrick. The Wii U version of the game also allows you to race as a Mii and the Xbox version lets you play as your Avatar. The PC version gets the most extras, with characters from Football Manager, Team Fortress 2, and Shogun: Total War, as well as some extra visual flourishes in the game's stages. If you've got a system capable of playing it, the PC port is the definitive version of the game. Courses available are the same on all systems. My personal favorites are the House of the Dead stage and the Casino Zone stage. 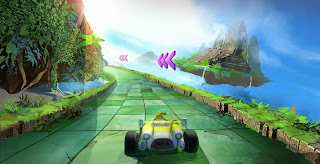 Like Mario Kart, you've got an array of weapons at your disposal in addition to your driving skills. Every one is useful, but their visual design feels uninspired and lacks the nostalgia value of Mario Kart's arsenal. Probably the best thing about this game's weaponry is that like Mario Kart, there is an item that targets the player in first place (a swarm of hornets), but unlike Mario Kart's Blue Shell, the hornets are actually pretty easy to avoid, and hitting them doesn't set you back too terribly. Because of this, you never feel like you're punished for being in first when playing with other people, which is a great change from Mario Kart. Unfortunately, against the AI this doesn't really matter, since the game features pretty aggressive CPU racers that rarely make mistakes and fully take advantage of every trick on a course. To even survive, let alone win, on the hardest difficulty level, you must play absolutely perfectly and still rely a little bit on luck.

The game is divided into three main sections. In Grand Prix, you can play through five cups with four courses each, followed by the inevitable, never fun in any kart racing game mirror versions of these courses. In World Tour, players engage in specific challenges throughout the game's various levels, such as drifting X number of times in one race, avoiding lines of traffic, or beating single, pumped up AI racers. Each challenge has a number of difficulty levels and completion of each earns you stars that go towards unlocking new racers. When you begin, about half of the game's cast is locked behind this mode. The third mode is a fairly standard Time Attack mode. 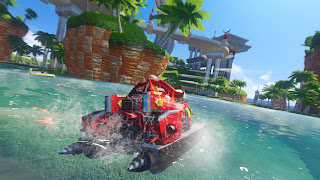 Like your vehicles, the game's courses also transform, some falling apart as you complete a lap, some warping you to new, weirder locations. It looks great and the effect really makes the courses feel alive, but that leads to my single biggest problem with the game: I really don't like the planes or boats. For the most part, I think the kart racing is fine, but the boats and planes just don't feel good to me at all. Even in places where they fit in great with the setpieces, such as the wonderful looking Skies of Arcadia stage, I'd really rather just be driving. The boats feel bad and the game's overly flashy courses sometimes make it hard to figure out where you're even supposed to go, and the planes feel sluggish compared to driving. Overall, the course design feels worse than an average Mario Kart course, and the plane and boat segments just serve to further the problem. Almost every single course is super busy and looks great, but the business makes for harder to see, harder to handle environments. Fine for someone willing to dedicate time to learning the game inside and out, not at all good for casual play. I personally think the game's stages are more fun to watch than play.

Something I really appreciate in this game is that you're allowed to play any mode with four players (five on the Wii U), not just Grand Prix. You can take friends with you into World Tour to try to make slogging through it to unlock characters less exhausting, but getting stuck on a challenge and replaying it on hard mode four or five times to complete it and earn stars isn't exactly fun at a party. Still, the option's great to have. 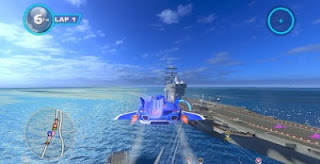 This game lacks a few options I really wish it had. First, there's no way to remap controls, so you're stuck using either R1/L1 to accelerate/brake or R2/L2 to do the same. You can switch between these two configurations, but since one set of buttons will always do nothing, there's no reason to not just let either set work at any time. I would greatly prefer to map accelerate to the X or Square buttons instead, but there's no way to. Second, I really wish that in the era of widescreen TVs, more multiplayer games would give players the option to split a screen vertically instead of horizontally. This game lacks that option, and as a result multiplayer matches give you an enormously wide view of the course but a poor view of what's above and below you, which really started to irritate me in some stages. Third, I really wish there was a way to unlock characters through standard local or online multiplayer races, because I have absolutely no interest in spending 20 hours grinding through the World Tour mode to unlock all of this game's characters, even with a second player next to me.

Even if you're a Mario Kart expert, this game is going to wreck you until you really learn all of its tricks. The AI is relentlessly skilled, courses absolutely require careful drifting and boosting instead of allowing these skills to be supplemental, and the World Tour challenges have zero margin of error on their hardest settings. I can certainly see the appeal for someone who wants to play a kart racer but wants a more hardcore, rewarding to learn game than Mario Kart, but it's really not for me. I can get serious about fighting games, but when it comes to kart racing, I really just want to screw around and play casually. I was hoping this game would serve as a good holdover between Mario Kart Wii and the next console Mario Kart title, but it asks more than I'm willing to put into it. Overall, this is a solid game, and I'm not trying to detract from its accomplishments, but it's just not for me.
Posted by surlaw at 11:50 PM