Readership of this blog has fallen pretty heavily this month, and that can only mean one thing: We need more lists! What draws hits more than Top X Lists? Apparently nothing, if the news sites I read are worth anything. To jump on that bandwagon, I present a truly important Video Game List article: The Top Ten Frogs in Video Games.

Kid Icarus has a lot of great monster designs, and one of them happens to be a frog. While he's no Eggplant Wizard, this ugly, one-eyed frog with wings stuck to his head is still a pretty memorable monster. Kerons hassle the hero Pit in the game's second world.

When it comes to Pokemon, I usually prefer the more stupid looking monsters. Psyduck, Garbordor, Bidoof? These guys are my bros. I'll take them over the cooler, tougher looking characters any day. Croagunk, a Poison/Fighting type, falls firmly into the Dumb Looking Pokes category that I enjoy. He's a bipedal frog with a dopey set of teeth and an absolutely smug expression, what's not to like?

The hero of the arcade classic about avoiding cars, snakes, and alligators deserves a spot in any article about Video Game Frogs. Frogger's been in dozens of games throughout the years, the best being the recent Frogger: Hyper Arcade Edition. A lot of his games have been absolutely terrible, but Frogger: HAE proved that the old dude's still got a lot of spring left in his step. He even has his own bizarre rock theme.

Frog Fractions remains one of the most beautifully bizarre indie games I've ever played. It's free, so if you haven't played it and have an hour to kill, check it out. I don't want to say much about how the game works in a fluff piece about Video Game Frogs because you're best going into it absolutely blind. Be sure to unlock all the upgrades.

I realize these guys probably aren't very memorable or interesting, but that screenshot there's one of my favorite bits of weird dialogue in an overall strange and wonderful game. EVO, a game about eating enough fish until you turn into a bird, is one of my all time favorite 16-bit titles. You can customize your horrible evolution monster pretty heavily to build your own frogs!

Toad Man is a robot man toad and therefore some may argue he doesn't belong on a list of Video Game Frogs, but that's dumb talk. The Battletoads are similarly not disqualified from this list for being toads, but instead because their game is bad and their names are gross. Toad Man is one of my favorite Mega Man villains, alongside such classics as Guts Man and Air Man. He shakes his booty to make it rain. 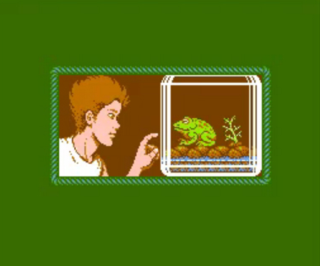 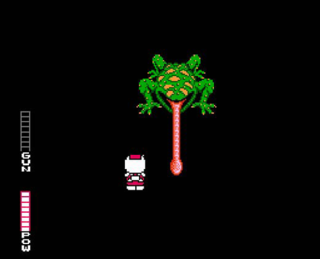 The Japanese version of Blaster Master is a story of galactic conquest and an evil emperor. The North American release changed the story to be about a boy, Jason, whose frog, Fred, escapes from captivity and falls into a radioactive hell-world. There are a whole bunch of frogs in this game, some more horrific than others. The boss above gave me the willies when I played this game as a kid.

Frog Mario is one of several animal-themed power-ups in Mario 3. It makes you slow and ungainly on land but beautiful and graceful when underwater. This suit has very limited use, yet I was always super pumped when I'd earn one. Along with Kuribo's Shoe and the Hammer Bros. Suit, Nintendo really knew how to limit exposure to specific power-ups to always leave players wanting more. 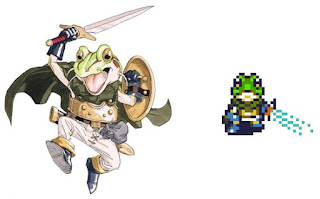 Chrono Trigger's Frog was once a sad sack named Glenn. He is transformed into an amphibian by dark magic, at which point he becomes braver, stronger, and for some reason starts speaking Olde English style. It's a fairly bad curse, since it makes him better in every way, except for looks. Dude may be ugly, but he could punch out the neck of anyone willing to say so. There are lots of frogs and frog-like things in Chrono Trigger, but obviously the guy actually named Frog is the most important. 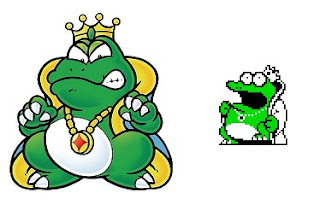 The Big Boss of Mario 2. Wart hates vegetables, insubordination, and Mario's subconscious. He's a huge jerk who's clearly having a great time reigning over the dumb little Shy Guys and bossin' around his Birdos. Wart has a cameo in The Legend of Zelda: Link's Awakening, but has otherwise been left in the Nintendo gutters. SPOILER: Both of the games he appears in are dreams. Wart is Nintendo's Freddy Krueger. I think this guy's an even better villain than Bowser, who's pretty phenomenal in his own way and will obviously be a major part of the eventual Top Video Game Turtles article. I'm asking Nintendo politely to include a playable Wart in the Wii U Smash Bros. sequel.

Edit: I am dumbstruck that I forgot about one of the most important Video Game Frogs while writing this:

There are 64 of these guys hidden throughout MGS3. If you attack one, it makes a wonderfully wobbly sound. If you get them all, you unlock a stealth camo suit. Metal Gear Online had a Capture the Frog mode in place of a traditional Capture the Flag mode and it featured these things as your object of conquest. Somehow, in spite of the fact that I've found all the frogs in three separate versions of the game, I forgot about these guys when writing an article about frogs in video games. Special thanks to my wife for catching this heinous mistake.

That's all for this time! If I missed any frogs you really love, be sure to leave a comment! If you just want to reminisce about how great Wart is, that's good too.
Posted by surlaw at 11:55 PM