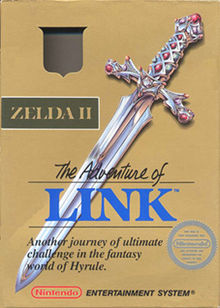 Game development has always been a sequel-friendly environment. More often than not, developers release sequels that build upon and refine their existing formula, and as long as it's done well, I've got no problem with it. I am, however, a little nostalgic for how a couple developers treated sequels in the mid-80's. While most sequels still focused on incremental changes, a few went in wildly different directions, the most famous being the US version of Super Mario Bros 2, Castlevania 2: Simon's Quest, and Zelda II: The Adventure of Link. The third installments of each of these games would undo these changes, but to this day I think Mario 2 and Zelda 2 are among the finest titles released on the NES. I hold much less fondness for Castlevania 2, but still respect it a great deal.


The original Legend of Zelda featured top-down gameplay focused on mazes and survival in a hostile world almost entirely devoid of human life. Zelda II switches dramatically to a sidescrolling platformer, featuring a much greater emphasis on towns and NPCs, a far heavier focus on combat, and RPG elements such as experience points and level building that never make another appearance in the series. Unlike most RPG systems on consoles at the time, players are free to build Link as they choose, spending their points on either physical strength, health, or magic power. There is a default path through the game's leveling if you just select whatever options it suggests after the appropriate experience is earned, but it's more fun to do it your way and focus on one particular stat of your choosing in the early game. 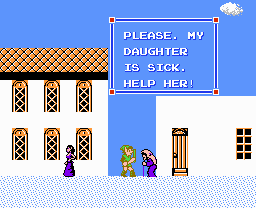 Platforming is a big part of Zelda II, but there aren't a whole lot of tricky, pixel-perfect jumps required. The main danger is being knocked off of platforms by enemies, but if you take your time, carefully observe your environment, and take advantage of a spell that boosts your jumping ability, the platforming is very manageable. Taking things slow is a big, big part of this game, and is part of the reason it developed a notorious reputation for being overly difficult. In both combat and platforming, you must approach every situation carefully and patiently, rather than rushing in and plowing through dungeons. Health recovery within dungeons is very limited, enemies do lots of damage, but a good portion of the game's difficulty can be managed simply by slowing down. 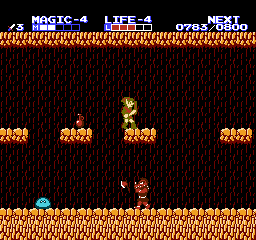 I can definitely understand someone not liking a game designed this way, especially since it's really not necessary in any other game in the series, but the slow, careful approach to action is something that I really love. It's not stylish, it's not flashy, but every move you make matters, and every strike has weight. In this way, Zelda II feels a lot like the NES equivalent of a Dark Souls game. Often punishing, but almost always fair. As you get better at the game's mechanics, tasks that once seemed insurmountable become trivial; the panic you feel the first time you face a red knight becomes pretty amusing once the game trains you well enough to take them down easily.

When you're not in towns or dungeons, the game takes on an overhead view similar to the original game. Here, you can explore a world map full of caves, palaces, cities, and secrets. Random encounters appear as blobs on your map which when touched begin brief combat scenes. Since the game's swordplay is so fun, this never feels like a slog, but if you want to avoid battles, simply get out of the wilderness and onto a road. There are one or two moments where it's unclear where you're supposed to go, and not in a fun way, but compared to some other games at the time (again, Castlevania 2) this isn't too terrible. Zelda II does a great job making its world feel both hostile and alive, thanks in part to the numerous towns you encounter. In each town, a wise man or a knight will teach you new skills, so the game has a constant sense of reward. One of the subtle little things about the game's world is that if you look carefully, you may discover that the entire original Zelda game takes place in one tiny corner of southwestern Hyrule. It's probably just meant to be a cute callback, but it really does make this game's world feel huge. 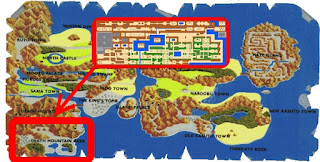 Musically, I think this game and the original are about equal. They both have soundtracks consisting of a small number of songs, but they're both equally memorable. Visually, both the characters and environments look good, even if there are a few too many palette-swapped enemies. The proportions of the townsfolk you meet are wildly inconsistent, with some drawn realistically and others exaggerated cartoonishly, but it works. In the original Japanese release of the game, all dungeons looked identical, but for the worldwide release, Nintendo gave each dungeon its own color scheme. It's a simple change, but an important one, making each area feel more unique. The English version also features Game Over screen with a great silhouette of series villain Ganon, who otherwise doesn't appear in this game, with a great evil laughter sound sound effect that I'm pretty sure was taken from Punch-Out.

My only complaints with this game are that walking from Hyrule Palace to your next destination every time you reload your game gets old pretty fast, even with all the shortcuts you can unlock. It would be nice if you could save in each town you find, as once you run out of lives, you're kicked all the way back to Hyrule Palace. A Game Over costs you all of your unspent experience points, but all items, keys and level ups are saved. My other issue is that the final series of caves and enemies leading up to the final dungeon simply take way too long to get through. It's the one moment that hurts the game's pacing, because other than that, its final stage is pretty great.

I'm not a huge fan of more recent Zelda games, but I understand why people love them and why the series took the direction it took. That said, Zelda II is my personal favorite, in spite of it being totally out of sync with everything else in the series. I'd love to play more games made in its style (I've been told I should check out Battle of Olympus for this reason), but in modern games, only the Souls games have given me the same sort of feeling. If asked for my top three NES titles, I'd have a hard time ranking them, but an easy time choosing: It would be Super Mario Bros 2, Bubble Bobble, and Zelda II. Even knowing that it's not for everyone, I absolutely recommend Zelda II wholeheartedly. Cartridge versions are pretty common, but if you don't have a working NES, it's also available for download on the Wii, Wii U, and on the 3DS. 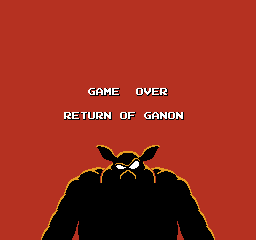