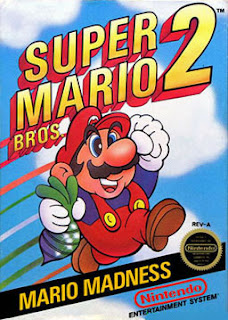 Writing my review of Zelda II: The Adventure of Link got me in the mood to take a look back at some of my all time favorite NES titles. As mentioned in that review, Super Mario Bros. 2 is one of my top three games for the system, along with Bubble Bobble and Zelda II itself. I really love all of the main NES Mario titles, from the arcade original through Super Mario Bros. 3, but SMB2 was and remains my favorite game in the series. From its unique character system, great enemy design, and catchy music, Mario 2 is all around fantastic.

Like Zelda II, Super Mario Bros. 2 is a completely unconventional sequel but with a much more complicated history. The Super Mario Bros. 2 released in Japan is a totally different game from the one released in the rest of the world. The original Japanese game essentially plays like an expansion to the first Super Mario Bros. title rather than a new game. It introduces much, much harder platforming, some really obnoxious traps, and differences in physics between Mario and Luigi, but nothing really feels new. Nintendo of America smartly decided to pass on releasing the game in the west, opting instead to take a lesser known Japanese title, clean it up, improve its gameplay, and Mario-ize it. That game was Doki Doki Panic.

Unlike a traditional Mario game, Doki Doki Panic focuses on picking up and throwing enemies rather than simply bouncing off their heads. The game starred a family who went inside of an Arabian-themed book to rescue two kids kidnapped by the frog king Mamu/Wart. Players progress through a series of seven worlds full of locked doors, lots of vertical climbing, and masked weirdos. There are four playable characters; Mama, Papa, Lina, and Imajen. To complete the game, players must play through every single stage as each of the four characters.

When converting Doki Doki Panic into Super Mario Bros. 2, Nintendo of America made a lot of substantial changes. Mama became Luigi, Imajin became Mario, Lina became Princess Toadstool, and Papa became Toad. Each of the new Mario-themed characters maintained the abilities of the original characters they replaced; Luigi has a high, floaty jump, Toadstool can fly, Toad can pick up objects faster, and Mario has no remarkable traits. In both versions of the game, players can either pluck vegetables out of the ground to toss at enemies or jump on top of enemies and ride them or throw them at each other. It's a lot of fun and pretty unique, and I prefer it over the simple "jump on heads" method of fighting found in most Mario games. 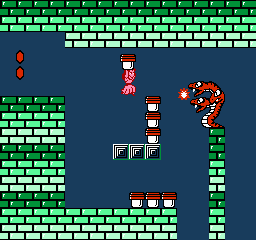 Most enemies were unchanged in the conversion, though there are a couple of changes to note. The menacing bird-headed gates that serve as exits for each stage were originally more human styled masks, the albatross enemies were given more frames of animation, and an entirely new boss, Clawglip, was added to the game's fifth world, replacing a repeated fight with an earlier boss, Mouser. It's still funny to me that Clawglip seems to be a mistranslation of Clawgrip, considering the character was designed in the US.

More significant changes were made to items within the game. Among the biggest: Magic lamps that lead to secret areas were replaced by potions, large hearts which boost your health were replaced by mushrooms, and a horrible blackface mask for throwing was replaced with a Koopa's turtle shell. A few vegetables changed slightly and the animation for the game's waterfalls was tweaked to look much smoother. Environments were left as they were.

As far as gameplay goes, Nintendo of America made three huge changes. Players no longer have to complete each stage as all four characters, which is a huge relief. Another great change was adding the ability to run by holding the B button, fixing the sluggish feel of Doki Doki Panic. The only negative change was that Nintendo removed the ability to save. Super Mario Bros. 2 isn't a particularly long game, but it's always nice to be able to save and resume your game at your leisure.

For a more complete list of changes, check out this article at The Mushroom Kingdom. There's a lot of fascinating history here, and I am very pleased that Nintendo made the choices they did. The Japanese Super Mario Bros. 2, later released worldwide as Super Mario Bros: The Lost Levels, really isn't appealing to a wide audience, and the original Doki Doki Panic has enough little problems that a straight port would have been a bad plan. This is a spectacularly well done conversion, improving both graphics and gameplay, and proved popular enough for the western Super Mario Bros. 2 to later be released in Japan as Super Mario Bros. USA and remade twice, once as part of the SNES anthology Super Mario All-Stars and later on the Game Boy Advance as Super Mario Advance. 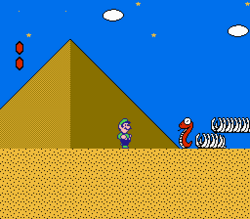 The history here is fun to dig through, but ultimately, what really matters is this: Super Mario Bros. 2, as released in America, is a fantastic game. Stages are smartly designed, hold plenty of secrets, and entire portions can be skipped by using clever jumping as either Toadstool or Luigi if you're interested in trying to speedrun the game. The difference in jumping style and momentum between Mario, Luigi, Toad, and Toadstool gives the game a great deal of variety and replay value, and everyone's bound to have a favorite style to use (mine is Luigi.) The bosses are fun and offer much more variety than Mario games typically feature and big boss Wart, a grumpy frog who really hates vegetables, is a great nemesis. The masked, creeping Shy Guys and Sniffits make good basic enemies, the egg-barfing Birdo makes a great mini boss, and the hovering Phanto mask that relentlessly chases players carrying keys is still an intense enemy today.

Super Mario Bros. 2 is the only game in the original series where I never feel the desire to use a Warp Zone to skip worlds. Every one feels varied enough to be exciting, but short enough to avoid overstaying its welcome. The game can be completed in under an hour, but not a minute of that time is wasted. As far as Mario games go, I feel that this one is absolutely perfectly paced. The slot machines that come up after each stage in which you collect coins aren't too exciting, but they do make coins feel more worthwhile, as does the relative rarity of said coins in comparison to other Mario games. All in all, I've got zero complaints about this game.

There's no question that Nintendo still makes quality Mario titles. The Mario Galaxy games are gorgeous and Mario 3D Land is probably my favorite Nintendo-made game of the last few years. They all feel pretty safe when it comes to art design, though. You know what style you're getting, you know what enemies you'll see, and you more or less know what to expect from the experience. That isn't entirely bad, as these games are still top-notch, but I really do miss the weirdness of Super Mario Bros. 2 and the Super Mario Land titles. Shy Guys, Birdo, Pokeys, and Bob-ombs have all made the transition from Super Mario Bros. 2 to later Mario titles, but, aside from Bob-ombs, are never given the same prominence as Goombas and Koopas. Between SMB2 and Mario Land 1 and 2, Nintendo has a really large well of weird monsters to draw from, but they always come back to the same few. It's also a shame Wart never appears again, outside of a cameo in The Legend of Zelda: Link's Awakening. I really love this jerk. 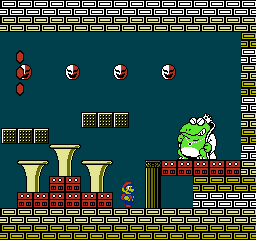 The one huge thing I really do find disappointing in current Mario games is that in the New Super Mario Bros. titles, players choose from four characters (Mario, Luigi, Toad #1, and Toad #2; Princess Toadstool/Peach has been demoted back to Damsel in Distress) but unlike SMB2, there isn't a single unique element between the four characters. The variety is part of what makes SMB2 so fun, and to see newer games outright ignore that fact just seems staggeringly lazy.


Like Zelda II, Super Mario Bros. 2 has always left me wanting more. It's a great sequel, a great experiment, and an overall great game. It represents some of the most care and dedication I've ever seen put into a localization of a video game, and it's impressive that its legacy has endured globally in a way that Doki Doki Panic's has not. There are plenty of versions to choose from, but I definitely recommend the original, whether on cartridge or digital, over Mario All-Stars, which is still nice but feels easier for one reason or another, or Mario Advance, which adds really obnoxious voice clips to the characters. 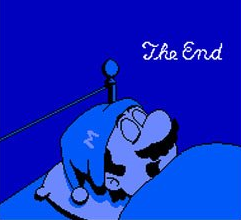