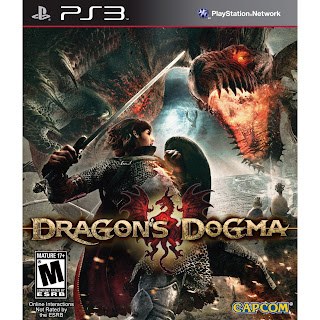 Dragon's Dogma, released by Capcom in the summer of 2012, marks one of the company's biggest risks of this console generation. It was a hugely expensive, ambitious project attempting to blend Japanese and Western RPG sensibilities into a coherent whole that appealed to customers on both sides of the world. It borrows elements from any number of popular games; the open-world exploration is clearly inspired by Western RPGs such as the Elder Scrolls series, combat is hack-and-slash heavy with bits of a very simplified Devil May Cry-style moveset, climbing larger enemies is reminiscent of a small-scale Shadow of the Colossus, and the oppressive atmosphere in dungeons (and the game's title) feels like an attempt at capturing the allure of Demon's/Dark Souls. Dragon's Dogma is an imperfect but charming blend of these elements, and for the most part it works well.


The story begins with the player controlling the knight Savan as he ventures through a cave, recruits buddies, and slays a chimera. This segment of the game serves as its tutorial, introducing players to the game's combat, its party system, and a variety of monster types. Once the tutorial ends, players are moved decades into the future where they build their own character, a humble nobody hanging out in the fishing town Cassardis. The player's character fights an invasive dragon which then declares your character The Arisen and steals his or her heart out of their chest. Turns out this doesn't do much to slow you down, and you're only out of commission for a short while. Thus begins the quest to hunt the dragon, slay him, and take back your heart. It's a charmingly goofy story that gets much stupider as the game ends, when things take a tone-shift from Dungeons & Dragons style adventuring to a more typical Japanese RPG finale.

There are a lot of undercurrents in the story about rejecting authority, whether it be familial, religious, or monarchical. Your Arisen is chosen by fate to save the world from the dragon, but constantly bucks or helps other buck the authority that surrounds them. There is some subtext to dig through there, but it's not told in a very interesting way, with the game choosing to focus instead on The Power of Will and Love Conquers All messages. Nothing here is new for a Japanese RPG, but seeing it told through the lens of a Western aesthetic is fun.

Players build their Arisen in every way, from gender to height to character class. I actually really like this game's character builder a lot; it's harder to make hilariously ghoulish characters than some games, but it's much, much easier to make nice looking characters than I'm used to. This is a minor point, but it's nice to be able to give characters curly hair that actually looks reasonably real, and not just like a plastic helmet shaped like hair. If you're later unsatisfied with your look, you can visit a barber in Gran Soren, the game's capital city and main quest hub. 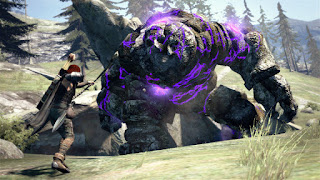 Aside from a couple specific bits of armor, your character's gender doesn't matter to the game's plot and your One True Love can end up being almost any major character in the story, regardless of their gender. This actually feels pretty progressive and not at all sleazy like the romance scenes felt in the Mass Effect series. Romance is a very minor part of the game, and it's possible to make another character fall in love with you without you even wanting them to. This leads to some pretty silly possibilities, such as the town's burly blacksmith falling for you and playing the part of your damsel in distress at the end just because you helped him make some money earlier in the game.

There are a few different endings to Dragon's Dogma, but most are just exquisitely designed Game Over sequences. They're all worth seeing, and you're given a Retry option afterwards instead of having the game save that as your final destination. There is only one full ending, with dialogue and animations that shift based on who fell in love with you. The outcome of the story is unchangeable, which makes sense in a game about being the chosen one. You can fight it all you want, but fate grabs you in the end either way.

Gameplay is fun but relies far too heavily on levels and equipment than on reflexes and skill. Those definitely matter a great deal, but no matter how good you are, you're not taking down enemies you can only chip one HP off per hit. Combat is much more fast paced and fluid than most open-world RPGs, but not as skillful or weighty as something more controlled like Dark Souls. For most enemies, you're fine just mashing out your attack skills. Boss and miniboss enemies are more complicated, and can be quite challenging with certain characters builds, but until very late in the game most enemies you'll encounter in the main quest are just cannon fodder. The lack of a lock-on button is my single biggest issue with this game's combat. 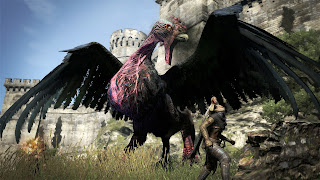 Players can initially choose from a small number of classes, but the choice expands as you play and class can be swapped without much cost. Classes specialize in either up-close melee attacks, magic attacks/enhancement, or ranged fighting with bows. Director Hideaki Itsuno previously directed Devil May Cry 2 through 4, and the impact of those games on Dragon's Dogma's combat shows pretty plainly, from forming new combos by delaying button presses between strings to outright borrowing Dante's Stinger attack for the game's sword-based characters. There's not nearly the amount of depth or complexity found in a Devil May Cry title, but combat is refreshingly fast for an RPG, even when you're just plowing through junk enemies. Magic attacks are big and flashy, which fits Itsuno's style, and I'm glad to say that elemental enhancements are actually extremely critical to the game.

The most interesting  part of the gameplay is the Pawn System. Players build a main Pawn early on who will accompany them through the remainder of the game. Pawns are AI controlled and are unable to use certain classes, but are just as customizable as the player character and are an inseparable part of The Arisen's journey. They're quite talky, and more often than not say completely useless things, but by the end I found their nonsense prattling loveable.

It's a very fun system that gets better when played online, as players can hire up to two additional Pawns crafted by other players. There's no direct multiplayer component, but being able to journey with characters made by your friends, or seeing some of the weird things strangers build, is a big part of the game's appeal. If you play offline, you can recruit pre-made Pawns, but they're not as interesting or strong. Pawn AI is generally decent, and will follow your example and learn from fighting different types of enemies. My favorite bit of Pawn learning is that if you spend time walking around farms picking up pigs and hurling them around, your Pawns will join in. 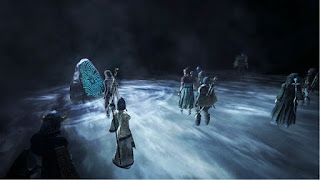 Dragon's Dogma gets a lot of basics right and scores high marks for presentation, outside of a terribly out of place J-Pop rock song that accompanies the game's main menu. The story is simple but unobtrusive, combat is fun but too reliant on levels, and the atmosphere is solid. The main quests are fun, but the optional "kill X enemies" ones are not. I only have two major complaints with this game, but I think they're pretty big ones.

My first problem is that the world is large but fairly empty of anything but enemies and treasure and walking across it takes forever. You are given no means of fast travel outside of items that are prohibitively expensive early on, and even then all those do is transport you back to the capital city. You're going to spend hours walking the same roads, fighting the same enemy formations, and all it does is pad the game's length. My other issue is that this game doesn't know when to end. The vast majority of the game is about finding and slaying the dragon. The game should end with that; instead, you get several more hours of tacked on content in which you slog through a coliseum-style area fighting an endless array of beefed-up monsters until you've collected 20 copies of an item, at which point the game allows you to move on to the final encounter, a mostly cinematic scene that stinks of RPG pseudophilosophy. The final result of both of these issues is that Dragon's Dogma feels like a 20-25 hour RPG stretched to 40. This content would be totally fine if it weren't part of the game's story.

I had a really good time playing through this game and I'll definitely give it a second run through, but it does at times come off as a poor man's Oblivion/Devil May Cry/Shadow of the Colossus/Dark Souls. It's surprising how well Dragon's Dogma combines the disparate elements of these games into something coherent, but it doesn't hit the same highs that these games do, even with pretty stellar production values, outside of its voice acting which ranges from mediocre to terrible. I recommend it, especially since it's nice to see Capcom invest so heavily in a new IP, but I have no doubt that the upcoming sequel will be a much more solid experience.
Posted by surlaw at 8:28 PM