Three months after the release of the Leviathan DLC, Bioware took another shot at expanding the story of Mass Effect 3. This time, players join forces with Asari crime boss Aria to help her take back her turf, the sleazy asteroid mining colony Omega, from Cerberus forces. Smartly, this DLC focuses on a smaller part of the universe, which makes it more understandable that unlike Leviathan, its plot really shouldn't affect the universe at large. This DLC is also much more combat-centric.

The Omega DLC, like Leviathan, lasts about 4-6 hours, and unfortunately costs $5 more, at a total of $15. Like Leviathan, it introduces two new weapons that I didn't care about, but unlike Leviathan, it actually introduces two new enemy types; powerful robotic Cerberus troops and some kind of zombie-squid Reaper soldier. This DLC also ends with a boss fight of sorts, which does give its action a nice climax. If you enjoy Mass Effect 3's combat, you'll have a good time here, but if you're in it more for the story, you're not going to find a whole lot to love. 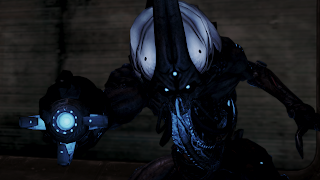 Omega's story begins with Aria enlisting Commander Shepard's aid in a rather poorly planned assault on her former home turf. None of your regular squad mates are allowed to come with you on the mission. Soon after infiltrating the now hostile station, our heroes meet Nyreen, the series' first female Turian character. I'm impressed by Bioware's restraint in not totally tramping her up. Nyreen is well written, visually interesting, and has a strong moral code. In other words, everything Aria's not. She was exiled from Turian society for being different and developing Biotic powers and fell in love with Aria at some point in the past. She was kicked out for her powers, but  hers talks about being different and her homosexual/interracial romance are what's more important here, serving as a "look, it's just like our world!" moment. It's somehow both subtle and ham-handed. I think it would work better if her partner were pretty much anyone but Aria. 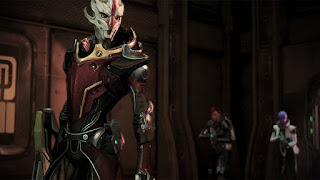 As I've surely made clear by now, I really dislike the character of Aria. Along with Kai Leng, I can safely say she's my least favorite important character in the series. She's written to be a fearsome badass, but it's done in an almost exclusively "tell, don't show" way. I don't know why Shepard would respect or fear her, or feel anything other than contempt or annoyance. Aria is a criminal overlord who rants about the freedom she gave the people she stomped on, which in a better written story would feel like intentional irony. Here, it feels like Bioware misfiring, trying to create a powerful mafia boss but making sure she never feels like a villain.

Aria just doesn't work for me, and the two inspirational speeches she gives in this DLC are really terrible to listen to. You can tell she's a badass because 1) she says so and 2) she swears a lot. She's always felt like a bit of a wish fulfillment character, but here, Aria as the Character Written by a 13 Year Old Boy has never felt more evident. Aria's not the only bit of weak writing in this DLC; while Nyreen is mostly well written, she does have an eye-rolling flirtation scene, and the new antagonist introduced here, General Petrovsky, is a cartoonish gentleman villain complete with sinister facial hair and a love of chess. He's fairly dull, but unoffensive, which I suppose is a huge step up from Kai Leng, as far as Mass Effect 3 villains go. I also cringed at a sloppy Star Wars reference (A character shouting about blast doors in the same diction A New Hope's hapless Stormtrooper made famous) that was written into the script entirely for an "I know that reference" moment.

I don't like that the story presents Aria and Nyreen as Renegade and Paragon archetypes while giving you no choice between who to side with. You can tell Aria to stop being a jerk to Nyreen, but it would be nice if you could leave Aria behind and go with Nyreen instead every now and then. It would also be nice if you could choose which of the two of them controlled Omega in the end, since this isn't something that would really change the universe either way. I really expected to be able to revisit Omega as a hub world of some sort, even if there wouldn't be much to do aside from shop and talk to NPCs, after completing the DLC. Instead, it totally disappears from the story and Aria is back to sitting, looking bored, on the same couch in the Citadel that she was sitting on before the DLC mission begins. You do gain two new Biotic powers at least, including Aria's massively overpowered Flare attack.

For $15, I would have liked to have kept either of the two new temporary squad mates as permanent members, even if I certainly would have never taken Aria out again. The combat here is honestly a lot of fun, and I really enjoyed the new environments (The Element Zero mines are really pretty), but that's the best I can say for it. I really have no idea why this costs 50% more than Leviathan did, and if you're going to choose only one of the Mass Effect 3 DLCs, I'd go with Leviathan. Both leave you a little unsatisfied in the end, but Leviathan has better writing and doesn't stick you with the universe's most bored, unconvincing mob boss badass. Nothing in Omega compares to Vega goofing around with science in Leviathan. Maybe I'm just bitter because my save file got corrupted (a system lock-up while saving wiped my data) and I was forced to deal with the worst parts of this DLC twice before I could complete it.
Posted by surlaw at 11:40 PM