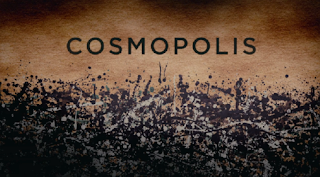 When I first read Don DeLillo's 2003 novel Cosmopolis, I certainly never expected anyone to make a film out of it. The book is fairly short, but at the same time is absolutely dense with philosophical conversations, many of which bear meaning to the sociopathic sparring partners that hold them but little to none to the human readers observing them from the outside. The point of Cosmopolis isn't to enlighten the reader to new philosophies or new theories about currency trade; it's to paint a portrait of a subculture so suffocatingly self centered that they cease to be human and feel more like machines wearing human skins.

Eric Packer, played perfectly in the film adaptation by Robert Pattinson, is a 28 year old currency trader who has made a fortune dealing in trades that would hold little interest to anyone who wasn't personally a part of his system. He is an emotionally detached, vacant husk of a human, who at less than 30 years of age has effectively burned out his life force. The story opens with Packer embarking on a single mission: To get a haircut. To the distress of his advisers, he isn't interested in receiving his hair care at the office or at home, but rather, as we learn late in the film, at a distant barbershop where his father brought him as a child. Packer's odyssey across a New York City paralyzed by protests, a presidential motorcade, a funeral procession, and daily traffic has the feel of a slow death march. To make matters worse, there's been a threat on Packer's life that he has no interest in taking seriously.

David Cronenberg writes and directs the film version of Cosmopolis, which follows the plot and dialogue of the novel extremely close. Many bits of dialogue are word for word from DeLillio's book, with Cronenberg's strikingly uncomfortable visuals bringing them to life in a way that's at once both mundane and nightmarish. While there are a couple of gory shots, little of Cronenberg's body-horror is present in this film. Instead, Cosmopolis creates an atmosphere of dread through carefully chosen camera angles and often total absence of sound aside from dialogue.

Like the novel, the majority of the film takes place inside of Packer's limousine, as his driver and security staff, against their better judgement, escort him from place to place. There are lots of extremely close camera shots within the limo, and the camera often looks up at Eric Packer from below, giving him a larger than life, powerful image that is in contrast with the emptiness and loathing that he feels for himself. It feels less like a limo and more like an alien spacecraft manned by otherworldly curiosities, with Packer in the captain's chair. Early scenes often consist of Packer talking with one other alternating character, as they feed philosophical rants back and forth, progressing their intellect only superficially. Spiritually, they're just as stuck as the traffic. Packer acts as an android with an intense fear of and fascination with death, in spite of not knowing what it is to be alive. The audience becomes a willing hostage of Packer's worldview, much as Packer himself becomes a willing hostage in the film's final act. 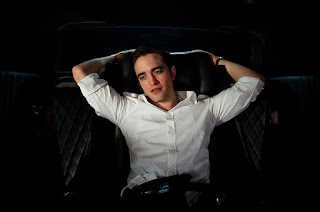 A great deal of care is put into maintaining an image of symmetry in the early parts of the film, with Packer in the center of the frame as an overwhelming presence, drowning out his environment. The symmetrical focus of the film begins to fade after Packer has a visit from his doctor, who informs him that he has an asymmetrical prostate. Packer doesn't know what to make of this, a situation which to the audience is clearly a red herring, but to Packer could possibly hold a deeper meaning about his self and the universe. From this scene forward, the film's visuals become less focused on symmetry and become more traditional, shot with more vibrant colors, more cinematic angles, and less distressing closeness. The film itself grows more organic as its lead's attention shifts from the abstract to the physical, and its asymmetry comes full force once Packer finally gets half a haircut and then leaves the rest unfinished.

The Benno Levin journal entries were the only part of the novel that weren't written from Packer's point of view, and are the only major parts excised for the film version. Levin, played by Paul Giamatti, is a disgruntled former employee and provides the centerpiece of the film's climax. His scene is perhaps made stronger by giving the audience no introduction to his character beforehand; we're witnessing this film from Packer's point of view, so it makes sense to be just as in the dark as he is about who this guy is and what he wants. There is a long, drawn out war of words between the two men, with the audience left wondering which of the two is crazier. Their confrontation is tense from start to finish, presenting a very human character in Levin who wishes to become a realer part of Packer's alien world, and Packer as the alien trying to become human. 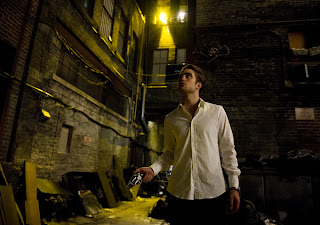 At its core, Cosmopolis is a Pinocchio story. Eric Packer is a young man old beyond his years from an unrewarding life that he barely cares about. Packer isn't entirely without emotion (he has a break down when a musician he was fond of dies, and he is enthralled by protesters attacking a cafe he's in), but he cannot direct his emotion in a healthy, human way. He is largely a husk trying anything he can think of to awaken humanity within him; several scenes focus on Packer's consumption, whether it be food, sex, or pain, but none of these things bring him out of his shell. He tries marriage, getting into a relationship in which neither partner has any real regard for the other. He tries destruction, both bodily and monetarily. His drive appears on the surface to be a suicidal one, but I see it rather as a morbid attempt to feel alive. As it turns out, it's neither consumption nor extremity that brings Packer closer to becoming a Real Boy; rather, it's simply spending time with normal humans, outside of his usual sphere of advisers and manipulators. In his barber, in his limo driver, and in Benno Levin, Packer finds people who in spite of their flaws hold a truer understanding of human nature than he has experienced in known memory. 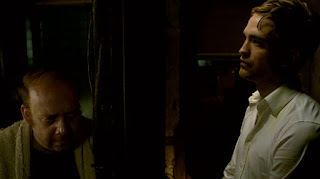 In spite of its dark narrative and oppressive atmosphere, I found a lot of Cosmopolis pretty funny. A few scenes are largely intended as comic relief. The rat-themed protesters, with ridiculous props, are great, but the highpoint of the film's comedy comes from Andre Petrescu (Mathieu Amalric), a clownish artist who has made it his life's work to shove pies into the faces of the world's most powerful figures. His hit on Packer inspires a reaction from the otherwise stoic millionaire that's between fury and laughter. While there are a few moments like this that exist primarily for humor, I also found a lot of the philosophical diatribes fairly funny. The content of these rants isn't funny in and of itself, but the way these soulless characters wax poetic to one another about universal truths when they themselves clearly have no meaningful grasp on reality is funny in a dry, sad way. Benno Levin embodies this most fully, as he willingly acknowledges that maybe he has discovered the truth of the universe, or maybe he's just gone nuts from listening to advice from the fungus between his toes.

I've been a big fan of DeLillo's novel, which at times feels like a sadder, more sanitary American Psycho, since I first read it, and I'm equally pleased with Cronenberg's adaptation. The film didn't make much of an impact upon release; with an estimated budget of around $20 million, the film made back less than one million domestically. It's honestly a hard film to recommend widely, because while it's at times very funny and at times very human, it's still extremely dense and alien. There's a lot in this movie, from its wordiness to its blunt, humanly gross sexual content, that is easily offputting, but I feel like it's worth digging into. Cosmopolis is an extremely intimate trip inside the head of a machine on a voyage to become a man, and in spite of its coldness, becomes profoundly human by its final minutes. A DVD release is set for January 1, 2013, and I hope at least a few more people see it then than did in theaters.
Posted by surlaw at 7:02 PM