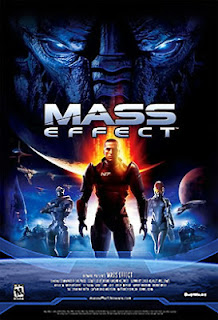 The way I was introduced to the Mass Effect series was definitely a strange one. I started out with the demo of Mass Effect 3, liked what I saw, and soon after picked up a copy of Mass Effect 2. I had a great time with the second game and picked up the third one about a month after it came out. I'd read plenty of summaries of the first game, so I had no trouble following the plot, but I was always curious to play it for myself. By the time I became interested in the series, I no longer owned an Xbox 360 and I didn't have a PC capable of running the original game. Finally, five years after its original release, EA released a PS3 port of the first Mass Effect, and I quickly jumped at the chance to check it out.

For all of their faults, I enjoy all of the games in the Mass Effect series, each for their own reasons. Mass Effect 3 has the most refined gameplay, the best control and a fun multiplayer mode but the weakest writing. Mass Effect 1 has strong characters, by far the most freedom to choose your dialogue, but very rough gameplay. Mass Effect 2 is a decent balance of good writing and fun gameplay, and is my favorite in the series. While ME2 doesn't play as well as ME3, it still handles perfectly adequately. I wish I could say the same for ME1; often, its gameplay is subpar enough to sour the experience.

The first installment of the Mass Effect series introduces players to Commander Shepard, whose appearance and background you create during a clever opening scene involving a computer malfunction "erasing" your personnel data. The world of Mass Effect is a melting pot of sci-fi cliches and references, lovingly molded into a shape that becomes its own fascinating universe full of memorable alien races. Even when the stories in these games get weak, their worlds and characters and interesting enough to keep the audience engaged. When the game opens, humanity is still a relative newcomer to the galactic stage. Shepard is primed to become the first human Spectre, an agent of the Citadel Council, and to pave the way for humanity to be accepted by the greater community.

Shortly after Shepard's story begins, he or she encounters a machine race known as the Geth, runs afoul of a rogue specter named Saren, and encounters a beacon that fills her mind with memories of a long dead civilization. Hunting Saren, searching for the meaning of the beacon's message, and stopping Geth incursions become the driving forces behind Shepard's journey. She is accompanied by two human soldiers, Kaiden and Ashley, and eventually recruits the aid of several alien crewmates, to the chagrin of some of her more conservative soldiers. The Krogan warrior Wrex is my personal favorite. A couple of characters are entirely skippable, but it would be a shame to miss out on any of them. All of the alien characters are more interesting and fun than either of your two human companions. 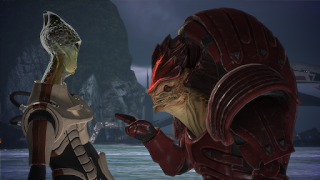 This game is definitely more free than its sequels. Players have more freedom as to the order in which the plot unfolds, large segments of the game can be skipped, and during conversations, there seem to be a lot more options than you'll find in the second and third game. In each game in the series, more dialogue options can be accessed as you increase your Paragon/Renegade score based on good/bad behavior, but I felt that this first game had many more moments where this mattered, especially compared to the third game. Not all of the dialogue is good, and in fact I felt that this game had the weakest written conversations of the trilogy, but it feels great to be able to more fully guide it.

The characters are good, all of the primary missions are good, especially the final couple, and there's a great sense of scale to this game. It really does feel like humanity is a new, tiny part of a huge world, and the villains you encounter feel much larger than what you encounter in the following games. This is all very good, but unfortunately, Mass Effect has a lot of problems with its gameplay. 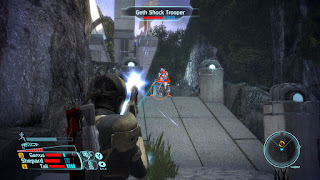 I'm not surprised that combat feels clunkier than it did in Mass Effect 2 and 3, but Mass Effect's shootouts definitely feel sloppy at times. It's not terrible, but it's notably worse. This wouldn't be a huge problem if the environments in which you battled were varied enough, but almost all nonessential quests end up the same way; drive a poorly designed vehicle around a planet, find an enemy bunker, go inside, fight through a wave of enemies in one of only a few different stage layouts. You seriously will fight through identical buildings dozens of times if you are intent on finishing this game's sidequests. It feels lazy, it looks bad, and since the combat's not very fun, it gets exhausting pretty quickly. The one thing I like about this game's combat over its sequels is that instead of worrying about ammo, you simply have to worry about keeping your weapons from overheating. It makes more sense in this world and it's more fun to monitor than ammo counts.

Almost all side quests, and many main quests, force you to pilot the Mako, a ground-based vehicle with floaty controls that will spasm out of control if it hits a small obstacle but has no problem scaling vertical walls (as long as they're the proper texture.) Both driving the Mako and fighting enemies in it are exercises in tedium, and I can't imagine how Bioware tested these segments and honestly thought "this is fun." They pad out the length of the game and even once you get used to the weirdness of the Mako's physics, they simply aren't fun. Spending ten minutes driving across an empty landscape to find more enemies to shoot, only to repeat the same procedure twenty more times, is pointless, even if these planetary landscapes often look great.

Mass Effect also has a tragically awkward inventory system. When buying items from shopkeepers, you often have to enter dialogue trees multiple times in order to see different item types, rather than just having a simple menu. You're limited to 150 items at any given time, and you're going to hit that limit very, very quickly, as enemies and lockers dump more weapons on you than you'll ever possibly need. Instead of upgrading existing guns, you'll find piles of identical weapons with different levels. There's absolutely never a reason to use a lower level weapon once you have a stronger once, so I'm not sure why they even continue to flood your inventory. Once you do need to sell or discard your excess inventory, the process is quite slow and tiresome.

The last awkward bit of gameplay involves the puzzles you need to go through every time you need to open locked objects, examine debris, or pick up insignias off of deceased astronauts. Buttons quickly flash on screen and you have a brief second to press the corresponding button before moving on to the next. If you fail, you can pay what becomes a negligible fee to retrieve the item anyway. This too pads out every part of the game, even if only by a few seconds each time. That time adds up, and by the end of the game you'll be very sick of pressing flashing buttons in random order every time you enter a new room. There are a couple of real puzzles throughout the game, but they are very, very few in number.

While Mass Effect's gameplay is its weakest part, its story and dialogue is good enough that it's still an enjoyable game. However, even those are not without their problems. The romances Shepard can pursue with squadmates have always been a bit creepy, but their writing in this first game is much worse, resulting in much more stilted and embarrassing attempts at sexy moments. The single most bizarre moment for me was early in the game, when an Asari soothsayer ranted to me about my glorious future as payment for helping her out of a jam. Sarcastically, I chose "That's it?" as my dialogue response. The Asari responded to that by having sex with Shepard, leaving me so embarrassed and confused that I just expected the worst from everything from that point. Luckily, nothing else in the game was that awful, but it set a really bad tone very early on.

Most of the game's art design, especially when it comes to aliens, is great. The art designs is part of what really draws me into these games, even if it's not all perfect. While aliens tend to look great, fashion tends to be horrible, though I guess that's pretty much on par with lots of classic sci-fi. An unfortunate number of civilians look like space hookers and the costumes designed for the exotic dancers you encounter are laughably unsexy. Lots of moments in this game, from dialogue to art design, try their best to be sexy while failing totally. Matriach Benezia, the wise old mother figure with miles of blue cleavage, is probably my favorite example. Unfortunately, this is one part of the series that never improves, though the romantic dialogue does get less awkward, if only slightly.

If you ignore all of the weak links, Mass Effect is still pretty fun. Its core story is exciting and its cast is great, even if Tali and Garrus don't get quite enough screen time in the later parts of the game. I enjoyed it a lot more once I said "no more" and stopped doing any more planetary sidequests. In all honesty, Mass Effect feels like a 10-12 hour game stretched out to 24-30 with filler. You do learn some interesting things about the universe through some sidequests, but getting through them is a slog. It should be noted that the PS3 version of the game also includes Bring Down the Sky, content that was originally sold as DLC on the Xbox. The little story present in this sidequest isn't bad, but like every other nonessential part of the game, you're going to play through three identical battlescapes that you've already played a dozen times before finishing it. At least the final part of this mission takes place in a unique environment.

Playing Mass Effect for myself definitely gave me a deeper appreciation of the two games that followed, but it's really hard to look past its flaws. I recommend it only if you're very patient with clunky game mechanics and poorly implemented systems. Otherwise, it might be best to just read a plot summary, find out who all the main players are, and just start with Mass Effect 2. There's a lot of Star Trek in Mass Effect, and like Star Trek: The Next Generation, I'd seriously warn newcomers away from large parts of the first game/season until they've already formed an appreciation for the series.
Posted by surlaw at 12:40 AM