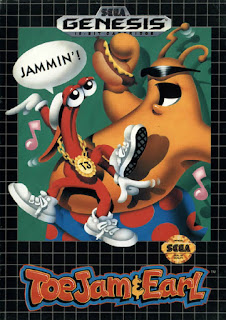 I remember playing Toejam & Earl on the Genesis when shortly after release in the early 90's. I had no idea what it was or what I was doing; I knew it starred two rapping aliens, the three-legged Toejam, a lanky alien who always reminded me of Slim Jims, and Earl, the plump, yellow blob monster with saggy pants. The two of them wander a surreal version of Earth in search for parts of their broken ship. I had no idea what was going on back then, and I don't have a much better idea now.


Toejam & Earl is, at its core, a Rougelike. Players traverse randomly generated stages (there is one fixed world you can select, but the game is meant to be played in Random mode), picking up random, unknown treasures, and seeking out their ten ship parts. Just about every other creature you encounter, from swarms of bees to dancing Satans to shadowy boogiemen, will try to kill you, or at least push you off the stage to the level below. A few creatures are more helpful, like a wandering Carrot Man who bums cash off of you and helps identify your items. Each stage is a floating platform in space, made up of grass, water, and quicksand, or possibly liquid cheese. An elevator hidden on each stage allows you to proceed upward to the next. You level up, starting at Wiener and ending up as Funklord, as you clear screens, but I'm not sure if leveling actually matters. 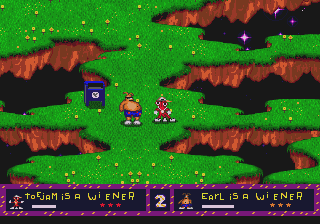 Each stage can be rather large, and due to the random nature of their design, can take a rather long time to clear. The game is nice enough to tell you when there's a ship part on the floor you're on so that you don't waste time searching empty areas, but exploration still takes a really, really long time due to the size of the stages and the horribly slow movement of your heroes. I'm pretty sure I've never seen another game with default movement speed this low. There are a couple items that can speed you up, but they also make it just a little bit easier to get yourself killed. Various junk food restores your health, while rotten food damages you. Fun items include a set of wings to strap to your arms, rocket powered boots (that usually send you off the edge of stages) and a duck-headed inner tube. Less useful, but funnier, ones include inflatable decoys, a book that puts you to sleep, and a spell that summons a rain of tomatoes.

In addition to your sluggishness, the random levels can be really frustrating, and fighting/fleeing enemies isn't exciting. In spite of all this, there's something oddly hypnotic here. This is a bad game from a gameplay perspective, but it's so weird and mellow and has such a mesmerizing, simple soundtrack that it's easy to lose yourself in it for a little while. I just don't have the energy to survive it for more than an hour. The impressive character animation (I love Earl's sneaking animation) adds a lot of life to the game, but its speed sucks some of that life out. The best part of the game is a beat maker in which players can rap with Earl and scratch out some sounds. It's totally separate from the main game but definitely a good time waster.

The game can be played entirely cooperatively. When players are close together, they share one screen; when they drift apart, the screen splits horizontally into two. This is a pretty brilliant way to handle co-op, and it works great. I was really surprised to see such a well implemented co-op feature in a game from 1991, but the team at Johnson Voorsanger Productions, which I don't imagine was very large, did a great job with it. When two players are working together, Toejam and Earl have some fun banter that's much more enjoyable than their otherwise silent single player adventures. Less endearing are the shrill voice samples that barf out of the enemies that attack you. Mad Scientist, Creepy Cupid, you guys upset me.

Toejam & Earl is ambitious, creative, and has really solid art design, but unfortunately, it's just not very fun. You move way too slowly, stages are too large, and I don't have the patience to spend two hours straight without saving playing very similar feeling levels over and over again. It's a game that works much better if you just take it one stage at a time, playing in 5-10 minute bursts, but the original version doesn't allow this. The game has been re-released on a few modern systems, so you're better off playing those versions and taking advantage of their save/suspend systems.

I don't know if I'd recommend this game or not; maybe to a few, very select people. I'm surprised to see so much nostalgia for it, because as a game, it feels aggressively bad in ways that it really had no excuse for in 1991. Maybe the lovably gross heroes are enough to overlook the sluggish tedium that makes up the rest of the game. Toejam and Earl are some of the most memorable heroes on the Genesis for sure, but I'd like to see them in a better game.
Posted by surlaw at 12:20 AM