Review - Dead Rising 2: Off the Record 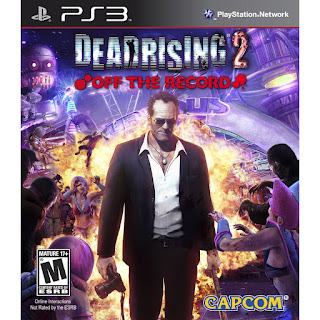 Capcom's Dead Rising 2 is a fun but flawed experience, marred by poor boss fights, loose controls, long load times, and some repetitive gameplay. These are legitimate issues that hurt an otherwise good time. There were also fan complaints that Dead Rising 2 was a worse game because it didn't star the previous game's hero, photojournalist Frank West. A year after its release, Capcom decided to listen to fans and touch up the game in several ways, but instead of releasing a free patch or cheap DLC, they went with a full retail release sold at $40, in which gameplay is modified and Frank West replaces Dead Rising 2's Chuck Greene, showing what would have happened in Fortune City if he were there instead of Chuck. Capcom gets a lot of flak for the retail updates to their fighting games, but those generally change enough of the game and introduce enough new elements to feel legitimate. Off the Record does not; it's a glorified add-on sold for way more than it ever should have cost.

For information on basic gameplay, see my review of the regular version of the game. Frank's photography abilities from Dead Rising 1 return, but feel more tacked on here. Three new bosses have been added (one a model swap of a boss from vanilla Dead Rising 2) and five new survivors. A new theme park area has been added to Fortune City with some bad minigames and funny costumes. You can now drive a clown car with a butt. You can dress up as Proto Man. Aside from these changes, the game is almost exactly the same. Cutscenes get some new dialogue, but for the most part play out exactly the same, aside from the final few which make some massive changes to a couple characters. The story changes are honestly pretty stupid, but at least they offer something new and unexpected. The Terror is Reality online mode has been removed, but it's not much of a loss, as those minigames were pretty bad anyway. 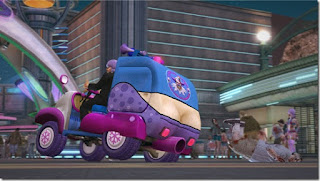 The biggest change to the main game is the removal of Katey Greene. In the original Dead Rising 2, time had to be portioned between rescuing survivors, pursuing the plot, and getting medicine to Katey. In Off the Record, Frank needs the Zombrex medication for himself, but can inject it no matter where you are. This removes both a nice emotional motivation for the story and a major part of the game's time constraint challenge. Chuck trying to protect his daughter and clear his name felt like more of a real story than Frank West trying to uncover the truth so he can be famous again. They're both kind of jerks, given the one liners they barf out, but I find Chuck more likeable. Frank's catchphrases from the first game ("I've covered wars" and his signature "faaaantastic") show up plenty in poorly scripted fanservice dialogue. Chuck's cameo in Off the Record is well handled. No new characters are introduced to the story.

By far the most welcome change in Off the Record is its massively reduced load times. They're still present, but less than half as long as the older version's. This matters a lot more than you might initially think, since you end up seeing loading screens so often. Another nice addition is the ability to set waypoints on your map that aren't related to missions, even if the guide arrow gets really screwed up sometimes. Some gameplay is changed, but I wouldn't really say improved. New combo weapons are introduced and Frank has his moveset from Dead Rising 1. Enemies are more aggressive and survivors are more fragile, which makes the game harder, but checkpoints have been added that you can reload from whether you've saved or not, which makes it easier. It balances out, but leaves you with a game where you have to babysit your survivors a lot more closely, and that's just not fun. It's still better than it was in Dead Rising 1, at least. The two new bosses are more fun than most of the boss fights in this series. Overtime Mode still feels really tacked on. 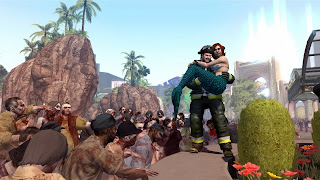 A major addition is Sandbox Mode, which lets you freely wander Fortune City without worrying about plot, timers, Zombrex, or survivors. You can spend days fighting zombies for medals, but since this series' combat is so sloppy I don't know why you'd want to. If you just want to screw around and experiment, this mode's for you, but to me, the whole appeal of the series is being forced to make decisions and gamble based on how much time I've got left. If I just want to play a beat em up, there are plenty of better options out there. Any money and experience points earned in Sandbox Mode carry over to your Story Mode save file.

If you haven't played Dead Rising 2 at all, I'd recommend the original version over Off the Record, unless you really, really love Frank West. Off the Record is an easier, less stressful game, so that should factor into your decision, but it's also just less exciting and it ends in a stupider way than the original version by far. Ridiculous campiness is a hallmark of the series, but you can only go so far before it just gets dumb. Granted, the dumb, over the top new final boss fight for the main story mode is probably the most fun in the game. It's still a pretty sloppy fight though. 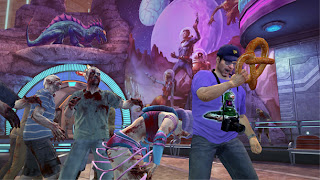 I bought Off the Record for $10, which is exactly what it should have cost to begin with. If you've played Dead Rising 2 already, do not pay full price for this game. I still really wish it had been sold as DLC for Dead Rising 2 so that its fixes, such as the improved loading and custom waypoints, could have made their way into the regular game as well. Instead, players have two options: Play the original game, with a better story and worse load times, or play Off the Record, and have a slightly improved but much easier game. Off the Record isn't bad, but it's very much more of the same.
Posted by surlaw at 11:51 PM