For the last year and a half, I've let the HamsterSpeak Contributor Index sit around without being updated. Well, I've finally gone in and filled it out in its entirety, from issue 1 to 63. If you'd like to take a look at it for whatever reason, here you go: http://www.superwalrusland.com/ohr/cont/Contributions.html

At this point, I'm much happier not working on HamsterSpeak, and I'm having a much better time just writing this blog. We had a lot of fun over the last five years, but I needed a break, and now that I've taken one I don't feel any strong desire to get back in the game. I've thought about launching an OHR review/feature site to replace HS and archive all of its content there (in addition to in the magazine itself), but this would involve learning a lot of code that I just don't have time to learn.

So, I'd like to take a second to announce that HamsterSpeak is officially closing shop. If someone else wants to take a shot at running an OHR magazine, now's the time. It's hard, frustrating work, especially on months where no one contributes, and it takes a lot of dedication. If you can pull it off, I salute you. Just don't use the same name.

Here are some statistics, for those of you that like that kind of thing. They're probably not 100% accurate. That's ok.

It's been grand. See you out there. If you want to keep up with me and my writing, keep on following this blog, but as far as HamsterSpeak goes, well... 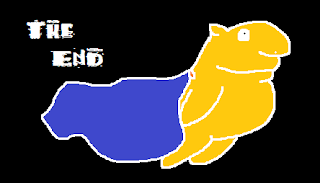