Back when the NES/SNES/Genesis were at their height, Music Forum, a local video rental store, had what was most definitely the best deal I've ever heard of from any rental place; for $7, you got to keep seven games or movies for seven days. Through this deal, I had the opportunity to play pretty much everything that showed up in the store. What usually happened would be that only one out of the seven games we rented would be good, and that would be the one my family would end up playing while ignoring the crappier ones that only got played once or twice. I've had an interest in going back and revisiting some of the games that I once played but either didn't enjoy or didn't understand enough to really give them a thorough, fair look (not that you'd expect much more from an eight year old). Toejam & Earl was one of these; Wizards & Warriors is another.


Wizards & Warriors is the second game made by Rare Ltd., the developers most known for games like Donkey Kong Country and GoldenEye. Released in 1987, it was preceded by Slalom, a simple but entertaining NES skiing game that probably hasn't aged as well as my memories of it. Wizards & Warriors was a much more ambitious title, combining action platforming with very light RPG elements of item collection and upgrading. It's nowhere near as well designed as the similar game systems found in Zelda II: The Adventure of Link, but it's still a nice system in concept. Unfortunately, the game's controls are so floaty, its combat so sloppy, and its art design so stupid that Wizards & Warriors is a very hard game to enjoy. At the same time, there's something endearingly terrible about it.

Players control Kuros, a goofy knight with a hilariously awful sword swinging animation that looks nothing like the macho beefcake on the game's fantastic box art. I'm used to a huge disconnect between box art and game graphics, but it's still funny to go from this perfect trashy fantasy novel cover to the garish pink and teal nightmares that you fight in the actual game. Players collect three keys, a teal, a pink, and a red one, to unlock treasure chests and doors of matching colors, as they smash their way through the game's eight stages. Along the way, they must collect jewels to pay off a jerky doppelganger who guards the boss room of each stage. Since the NES's color palette has to have teal and pink in it at all times to accommodate the keys and doors, Rare was forced to limit the colors used for this game's enemies, leading to a lot of really ugly teal werewolves/rhinoceroses and pink spiders. 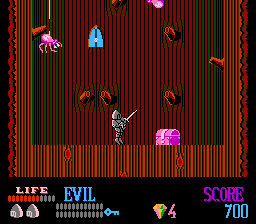 Everything about the game's art design is awful, but awful enough to be funny. I'm ok with that. I'm less ok with the rest of the game's problems. For a game that has so much platforming in it, Wizards & Warriors really makes jumping around from place to place horrible. Be prepared for a lot of really long trudges up vertical hallways with platforms barely big enough to hold you. It's like the bad parts of Metroid, but uglier and with much worse control. There are also some lovely, excruciatingly long platforming segments with retracting platforms that blend in so fully with their background that it's sometimes hard to tell when you can even stand on them. Some slopes cannot be climbed, even if they look no steeper than ones you can walk up no problem. There's a particular jump across a sloped hill in the game's third stage to find a red key that requires such miserable pixel precision that it was without a doubt the hardest part of the entire game for me.

Early combat involves waving your sword vaguely near an enemy. It looks charmingly terrible, but absolutely unconvincing. Soon, you acquire treasures that make things slightly less crummy. A magical dagger/axe can be thrown at enemies and used as some sort of weirdly slow boomerang, and honestly, this should have been your default attack since the basic sword swing is so stupid. You can also find boots that allow you to bounce off of enemies' heads, but this seemed to work less than half the time I tried it. Normal enemies are no fun to fight. Bosses are definitely more fun, but they're still shallow exercises in dodging very slow, very basic patterns. When killed, bosses erupt into swarms of ghosts. I appreciate that. After each boss, you rescue a scantily clad princess, which is really the only part of the game that feels anything like its box art. 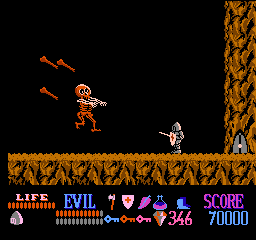 To be completely honest, I'm not much of a Rare fan. I've always found the Donkey Kong Country games fun but forgettable, Banjo-Kazooie and Donkey Kong 64 both left me pretty bored, I absolutely hated the Killer Instinct games, and I think Battletoads is completely terrible. GoldenEye and Perfect Dark were fun at the time but I definitely can't play them now. They made an unbelievable number of terrible movie and TV licensed games. I haven't played any of the Viva Piñata games, but those do have a really nice art style that's heads above anything else Rare has ever made. Their port of Marble Madness is fine. I remember RC Pro-AM being fun. That's about the best I can say for Rare. Wizards & Warriors fits in with most of their design ethos perfectly; solid concepts, mediocre or worse execution, and an overall feeling of something being off in just enough ways to make the overall experience bad, but not bad enough to stop playing immediately.

I played through Wizards & Warriors in its entirety recently, shortly after buying a cartridge at a new classic games store in Somerville. Even though it's a pretty bad game, there is something oddly compelling about its badness. It's certainly better than some truly awful NES games that are just no fun at all from the first minute on, but it's barely good enough to be called almost average. I actually think the fact that you have unlimited lives is a good thing here; the combat and platforming is so sloppy that if there was an actual fear of death, I'd never have kept playing. This is not a game good enough to warrant spending time becoming skilled at. With the ability to keep continuing, I made it through the whole hour or so that it took to finish the game and had a pretty good time in spite of how bad the actual game is.

I don't get mad about old school games being bad; either I get bored quickly and forget about them, or I have fun picking through just what it is that makes the game so bad. Wizards & Warriors falls firmly into the latter category. I'd recommend it to no one, but that doesn't mean I had a miserable time playing. I'm hoping to take a look at the second and third games in this series when I find copies. I'm guessing that, like the first game, Ironsword: Wizards & Warriors 2 doesn't live up to its absolutely perfect box art.
Posted by surlaw at 1:33 AM